The EPA Is Helping School Districts Purchase Clean-Energy School Buses, But Some Districts Have Been Blocked From Participating 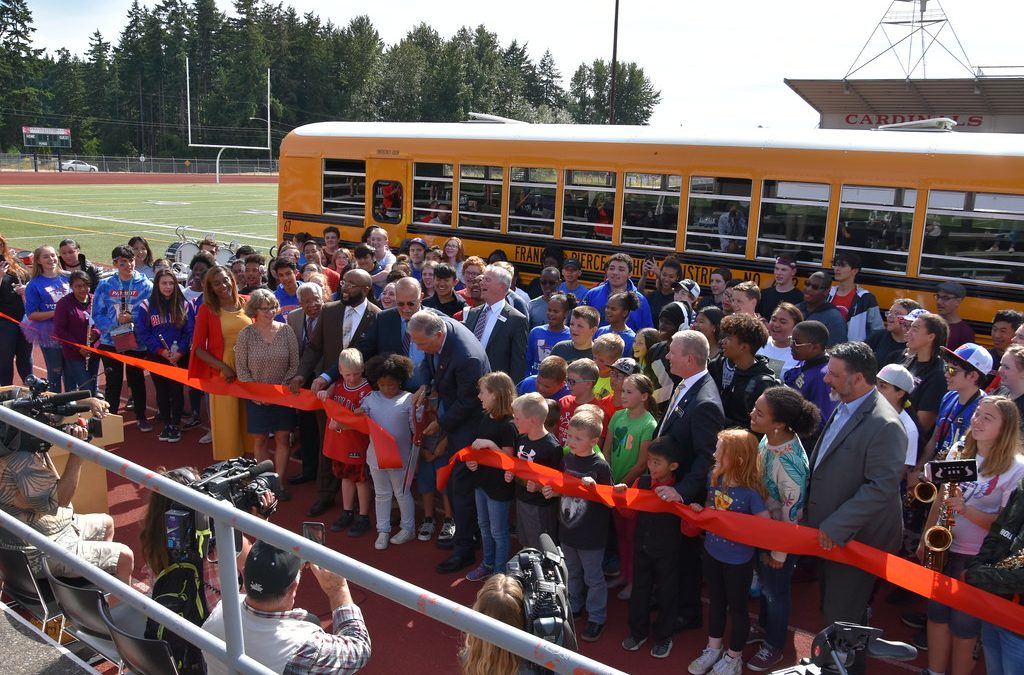 Part of the bipartisan infrastructure law passed last year, the program will provide $5 billion over the next five years to help school districts switch to clean energy school buses. However, some districts are blocked from participating due to the EPA’s requirement that they scrap their old buses.

Critics say this requirement is an unnecessary barrier to school districts getting funding for clean-energy buses, which can reduce health risks from air pollution and help combat climate change.

For the first round of funding, districts could apply for grants to replace up to 25 diesel school buses with electric buses or low-emission buses that run on propane or compressed natural gas. However, they had to identify diesel buses that they would be replacing with these clean-energy buses. This was a barrier for districts that don’t own their own buses.

In June, 14 members of Congress from Illinois sent a letter to the EPA complaining that several Chicago-area school districts, including Proviso, Rich Township, Lindop, Prairie Hills and Waukegan, weren’t able to participate in the program because of the scrappage requirement.

“These schools, regardless of their interest in the program or commitment to improving air quality for their students, are barred from funding to decarbonize their fleets,” the letter said.

Rich Township High School District 227 is one of these school districts. Located in the south suburbs of Chicago, the district contracts with a private company to bus its students. Districts in this situation have to get their contractor to agree to scrap the replaced buses. Superintendent Johnnie Thomas said it’s unfair to force districts like his to rely on the agreement of an outside entity in order to be allowed to apply for funding.

The scrappage requirement also prevents districts from using program funds to transition to owning their own buses.

Thomas said the requirement disproportionately impacts low-income school districts like District 227 that don’t have the funds to buy their own buses. He said the district was hoping to use funds from the program to purchase its own buses.

“With shortages, with Covid and things of that nature, we have very little leverage in negotiating costs of those services,” Thomas said. “This was a prime opportunity for us to have some leverage to help balance the cost of providing transportation services to our families.”

However, the scrappage requirement prevented the district from doing so. This led it to ultimately decide not to apply for the program, Thomas said.

“We’re excited that there is a push to become greener, to improve air quality in our area,” Thomas said. “Unfortunately, because we don’t own a school bus and would have to partner, it just wasn’t advantageous for us.”

Illinois is not the only state where school districts are having this problem. Susan Mudd, a senior policy advocate at the Midwest-based Environmental Law & Policy Center, said she has also heard from districts in New York and Louisiana that are dealing with this issue.

An EPA spokesperson said the scrappage requirement is necessary to ensure diesel school buses are taken off the street. The statutory goal of the program is to replace dirty buses with clean-energy ones, the spokesperson said.

“These requirements are also responsive to feedback EPA has heard from communities overburdened with air pollution,” the spokesperson said. “They expressed concern that, absent a replacement requirement, the most polluting diesel buses in the country would be relocated to their communities, further exacerbating long-standing environmental justice concerns.”

Mudd, who has been working with districts on the scrappage problem, disagrees with the notion that the requirement is mandated by the law, as nowhere in the actual text of the law is the word “scrappage” used.

“We’re talking about replacing the ride of a child who is impacted by the air pollution on the bus,” Mudd said.

Mudd said the EPA should make an exception for school districts looking to transition to owning their own buses.

“The law was aimed to improve the health of children,” Mudd said. “So what EPA could do is allow some flexibility in these limited circumstances.”

The first awards from the program were announced in October, with 389 school districts receiving a total of almost $1 billion.

The districts were selected via a lottery, with the EPA prioritizing districts that serve low-income, rural or tribal communities. According to the EPA, 99% of the selected school districts fall into at least one of those categories.

According to the EPA, 95% of the funding from the first awards will go to zero-emission electric buses.

Electric school buses have a number of benefits. They have a lower carbon footprint than diesel buses, and their batteries can also return energy to the electric grid during times of peak use, further reducing emissions. The decreased air pollution also reduces health risks for both children and the community.

Matt Stanberry, a managing director for Highland Electric Fleets, a company that helps school districts transition to electric buses, said electric buses also have several other advantages for school districts. He testified at a November Senate Environment and Public Works Committee hearing that electric buses cost less to operate. Electric buses have lower fuel costs, Stanberry said, and they require less maintenance, as they have about 3% of the moving parts that diesel buses do.

Electric buses are also quieter than diesel buses, a fact which Stanberry said school districts have been able to use to recruit bus drivers.

“Electric school buses are one of the really interesting spaces in the public policy arena because they provide so many different types of benefits to the communities that they serve,” Stanberry said.

Superintendent Thomas heads a coalition of school districts currently in talks with the EPA about the scrappage issue. He said he hopes they are able to come to some sort of solution that would enable districts like his to participate in the program.

“We just want to make sure that the rules that are created allow for us to have some equitable voice in participating in this program,” Thomas said. “We just hope that there’s some equity that comes out of it.”