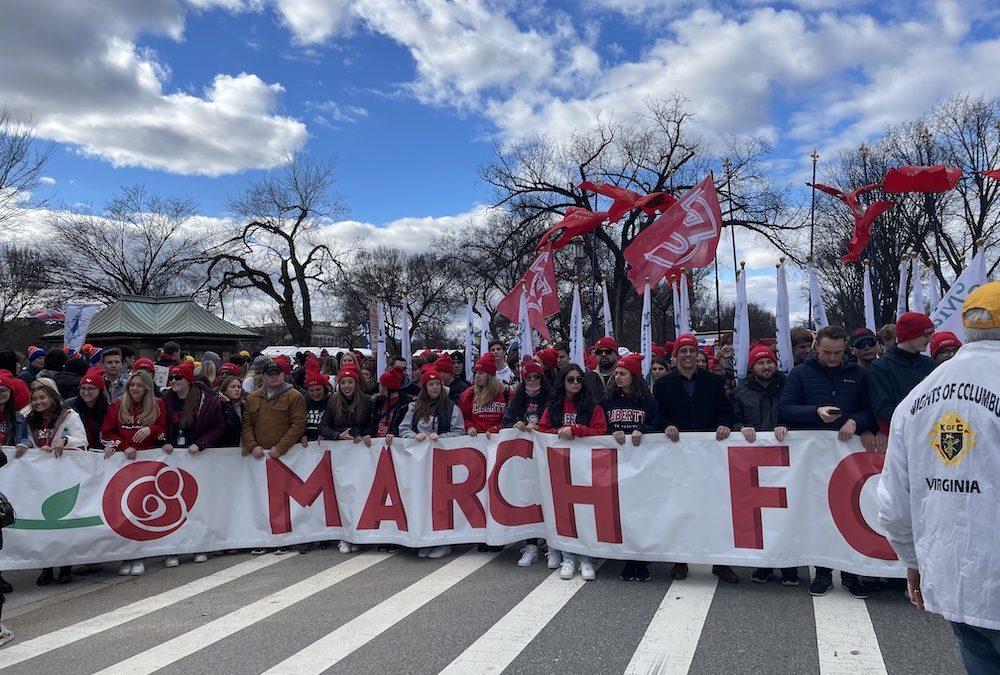 Liberty University students lined up to before the March for Life brought anti-abortion protestors to the steps of the U.S. Capitol. (Molly Burke/Medill News Service)

WASHINGTON — Signaling a monumental change in anti-abortion activism, demonstrators in the 50th annual March for Life followed a new route Friday to mark a new strategy.

The march started in 1974, on the first anniversary of the Roe vs. Wade decision, to promote abortion opposition measures and overturn the landmark ruling, which guaranteed the right to abortion.

For 49 years, the march culminated at the U.S. Supreme Court. But this year, the abortion opponents marched to the U.S. Capitol instead to mark the movement’s shift to legislative issues after the Dobbs decision, which removed federal protection of abortions and allowed states more authority to ban the procedure.

Thousands of abortion opponents, including many high school and college student groups from across the United States in matching “Pro Life” and “March for Life” hats and shirts, descended on the National Mall for a rally before marching to the Capitol.

Participants were celebrating their win in overturning Roe and discussing their next steps.

Danielle Pitzer, the director of sanctity of human life at Focus on the Family, a Christian ministry, said she attended the event largely to celebrate what she saw as an unexpected victory with Dobbs vs. Jackson Women’s Health Organization last June.

Pitzer said turning the issue back to the states means that the anti-abortion movement will continue to have to fight for favorable legislation across the country.

“We want people to be engaged and have their voices heard,” Pitzer said. “There’s still a lot more work to be done.”

Representatives from Focus on the Family, which is based in Colorado Springs, Colo., travel to the March for Life annually.

Pitzer said she hopes post-Roe steps include promoting a holistic view of women, which includes supporting them through their pregnancy with jobs, education, housing and other aid.

“We want it so that abortion is unthinkable because it doesn’t solve the many issues that they’re facing,” Pitzer said.

Others involved with the march, like Frank Pavone, a former priest and the national director of Priests for Life, focused on stronger laws against abortion. Pavone argued that embryos and fetuses should be granted rights.

“Our goal is to grant full protection to these children,” Pavone said. “That still needs to be done.”

Pavone, who was defrocked from the Catholic Church on Nov. 9 for “blasphemous communications on social media” and “persistent disobedience” of his bishop, led an abortion protest outside Planned Parenthood in Washington on Thursday.

He also advocated for federal laws to take action in restricting and banning abortion, claiming that the Dobbs decision left that door open.

Mae Kuykendall, a law professor at Michigan State University, said that while a national ban would be extremely unlikely to pass given Democratic control of the Senate and presidency, it most likely would be upheld if it were to be enacted.

The Dobbs decision defers to state abortion laws any federal action that could possibly be based on a clause in the Constitution that allows national regulation of commerce between states.

“There could be arguments that a national ban is not something that the Commerce Clause gives them authority to do, but there’s no way that the current extreme Supreme Court would say you can’t do that,” Kuykendall said. “They would say ‘hot damn.'”

The presence of Pavone and his followers outside the Planned Parenthood office was met with protests. Jamie Manson, president of Catholics for Choice, which supports abortion rights, said Pavone’s group was “intimidating” and “menacing to the patients here.”

Manson and others gathered on the roof of the building and unfurled banners down the walls, declaring “most people of faith support legal abortion” and “Catholics support abortion providers, abortion seekers, abortion access.”

Manson said the banners highlighted recent findings by the Pew Research Center, which found that 76% of American Catholics believe abortion should be legal in some instances and illegal in others.

“We’re trying to break up this disinformation and false narrative that the anti-choice movement is putting out that you have to be anti-choice if you’re a person of faith, and it’s just simply false,” Manson said.

The organization also attached posters on lampposts and structures highlighting their stance and Pew findings along the route of the March for Life.

Kuykendall said this is a new stage of the anti-abortion movement.

“For years, they worked to get around the courts, and they succeeded by stacking the Supreme Court with ideological extremists,” she said. “Next, they want to work around public opinion.”