“People said I had it in the bag,” he said, “but it wasn’t until halfway through the race when I thought, ‘Hey, I might have a chance at this.’ ”

Ware finished Sunday’s race in 2 hours, 19 minutes, 16 seconds, the best Marine Corps Marathon time since 1997 and more than four minutes ahead of his closest competitor. 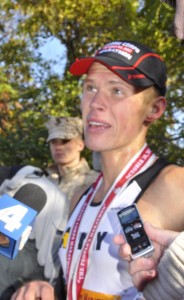 About 30,000 runners lined up at the start line near the Pentagon for the 36th running of the marathon. The field included young, old and celebrities — television star Drew Carey among them.

Ware, 27, of Wheeling, Ill., said he has run marathons since he was 17. The biggest challenge was dealing with the hills en route to the finish line at the Iwa Jima Memorial, he said.

“You really start to feel it the last two miles,” Ware said.

Ware still cruised past Michael Wardian, 37, of Arlington, Va., who finished in 2:23:46. Wardian said he was a little discouraged with his results, but that he would use that as motivation to do better next year.

“I am disappointed I didn’t win,” Wardian said. “But that’s why you line up, and that’s why I am a better runner today.” 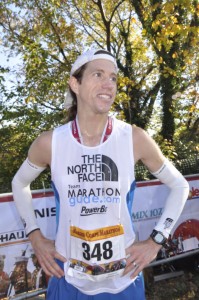 Michael Wardian, whose total running time was 2 hours, 23 minutes and 46 seconds, said he was disappointed he didn't come in first, but would use that as motivation to do better next year. (MNS photo)

Wardian said he has run more than a dozen marathons this year. He took first in the USA 50-Mile Championships in Boalsburg, Pa., last week.

“It’s a stepping stone and hopefully next year I’ll come back and rectify the mistake that I made today by letting [Ware] get a little too far ahead,” Wardian said, with a laugh

The spread-out nature of the field was exemplified by this stat: There was a spread of more than 10 minutes between Ware and the fifth-place finisher.

That was in contrast to the tight finish in the women’s race, where Dengersa, a native of Turkey, eked out her victory.

Carey, a former Marine Corps reservist and a first-time marathoner, helped kicked off the race.

“It’s a big honor to be one of the honorary starters,” Carey said. “It’s a lucky thing that I’m a celebrity so I get to do these things. There are a lot of people who are a lot more deserving who should be doing it.”

The oldest runner in the field was 90-year-old retired Marine Col. Johnathan Mendes, a former fighter pilot who said he would be content to finish the marathon before it was dark out.

“You only go around once,” he said. “Why not have some fun?”