The whole world: the power of seeing Earth from space 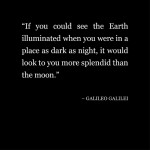 AHEAD OF HIS TIME: Although he never saw Earth from space, Galileo Galilei dreamt of what it might look like. In 1632, the man who championed a solar system centered around the sun penned this prescient line in his controversial “Dialogue Concerning the Two Chief World Systems.” 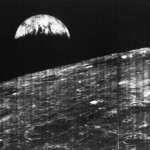 SNEAK PEAK: The world’s first view of Earth taken by the United States Lunar Orbiter I on August 23, 1966, from the vicinity of the Moon. (NASA) 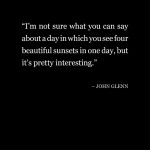 YOU CAN SAY THAT AGAIN: The humble words of John Glenn, the first American to orbit Earth, upon returning from his historic flight in 1962. 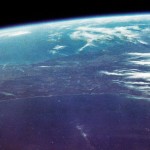 FIRST IMPRESSIONS: A view of Earth from the first American to orbit it. Glenn snapped this picture of Florida 162 miles below him three hours into his flight. (NASA) 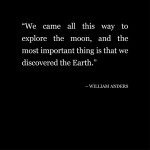 REAR VIEW MIRROR: When William Anders orbited the moon in 1968 on the Apollo 8 mission, he observed that sometimes you have to travel 238,855 miles to best appreciate where you came from. 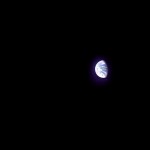 GLOW IN THE DARK: Earth, as seen by the crew of Apollo 8, the first people to leave Earth’s orbit. On Christmas Eve 1968, Anders and the rest of the crew recited a passage from the Book of Genesis in a transmission back to Earth. (NASA) 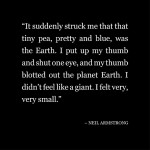 FEELING SMALL: The first man to step foot on the moon expressed the humility of looking back at Earth during his historic journey in July 1969. 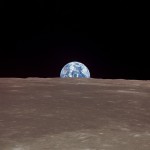 HARVEST EARTH: Taken by the Apollo 11 crew on July 20, 1969, this image inverts the perspective of a full moon hovering over the horizon of the Earth. (NASA) 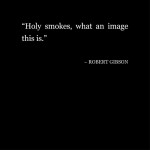 KODAK MOMENT: According to Smithsonian Magazine, Robert Gibson rushed for his camera upon noticing his fellow astronaut Bruce McCandless II floating outside the window of the shuttle Challenger. The thought that ran though his head is one shared by many who see the resulting picture. 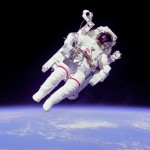 FREE FALLING: In February 1984 Bruce McCandless II became the first person to float freely in space, hovering 150 nautical miles over Earth, untethered to any craft. Lucky for us, Gibson had the presence of mind to capture it on film. (NASA) 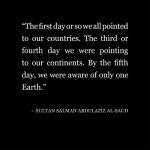 ASTRONAUTS WITHOUT BORDERS: Sultan bin Salman Al-Saud became the first Arab, Muslim and member of royalty in space when he took flight on the shuttle Discovery in 1985. 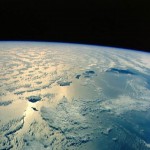 VACATION SPOT: Hawaii’s archipelago, taken by the crew on the 1985 Discovery mission. 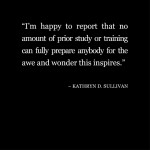 READY OR NOT: Dr. Kathryn D. Sullivan was the first woman to walk in space and helped deploy the Hubble telescope in 1990. 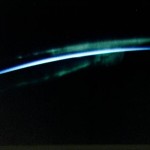 SOUTHERN LIGHTS: Sullivan was aboard the shuttle Atlantis in 1992 when this picture was taken. It shows the Aurora Australis, mingling with Earth’s limb, the thin blue line where the planet’s atmosphere meet the darkness of space. 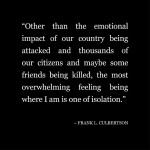 EXPATRIATE: Frank L. Culbertson was the only American not on Earth during the 9/11 attacks. This line is from a letter he wrote from the International Space Station on September 12, 2001. (NASA) 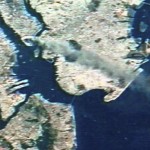 A LONELY VIEW: A still from a video taken by the crew of the International Space Station on September 11, 2001, looking down on the scene unfolding 250 miles below in lower Manhattan. (NASA) 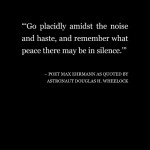 TWEETS IN SPACE: Douglas H. Wheelock—a.k.a. @Astro_Wheels–has spent more than 175 days in space. He posted this quote in a message on Twitpic, along with his view of a swirling Hurricane Earl. A growing number of astronauts are using Twitter, blogs and other social media to communicate their experiences to the rest of the world. “Prior to the advent of social media you basically had to show up physically with slides and a projector or a power point presentation and you had to show people what the Earth looked like from space,” said Turnage, the executive director of the Association for Space Explorers. “Now they can do it in real time.” 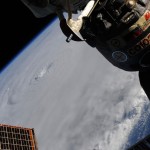 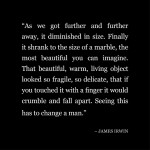 A CHANGED MAN: James Irwin, of the 1971 Apollo 15 mission, is among the many astronauts profoundly moved by the view of Earth from space. 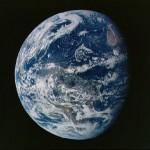 Just over 500 of the more than seven billion human beings that live on Earth have seen with their own eyes what the planet looks like from space. The experience, they say, is profound and humbling.

“In one direction there’s all of human history laid out in front of us. And we turn 180 degrees, there’s nothing, forever and infinity,” explained Andy Turnage, executive director of the Association for Space Explorers, an international professional organization for astronauts.

Turnage has not been to space himself, but works with astronauts from across the globe. He says seeing Earth from space — apart from being hard to explain — is invariably a sobering experience.

“They realize that as an individual you really are a unique creature and you really can have an impact,” he says on behalf of his astronaut members. “You really do have an influence on what’s happening in this huge milieu that’s happening on a palette before you.”

Astronauts frequently describe the planet as appearing incredibly fragile. “They all remark about different aspects – some comment more about the wildfires they see, or the deforestation they are able to discern from above,” Nicole Cloutier-Lemasters, NASA’s public affairs officer for flight crew operations, wrote in an email. “But they all seemed very humbled by the view. It definitely seems to give them a pretty universal sense of just how small our delicate planet is.”

Culled from journal entries, interviews, Twitter accounts and NASA records, the slideshow above presents a sampling of thoughts and images from space, which have changed the way we think about the third planet from the sun.