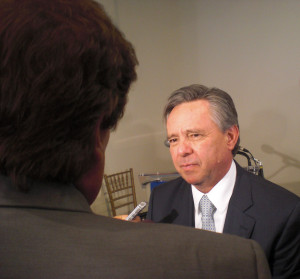 Trade, border security and Mexican contributions to the U.S. economy will factor heavily into the future of U.S.-Mexican relations, the ambassador told a crowd at the New Democrat Network, a progressive think tank and advocacy organization.

“We have made great strides in order to reach this point and work closely with the U.S. to anchor our most important and joined achievements,” Medina-Mora said.  “I believe that now is the time to cash in the hard work as individual countries and as a region.”

Mexico is America’s third-largest trading partner, with almost $500 billion in goods traded in 2012.  As Mexico’s economy continues to grow and more than half of its population now considered middle-class, its contributions to the North American economy will be more crucial than ever in the coming years, said Medina-Mora.

The upcoming meeting between the two presidents will mainly focus on enhancing “opportunities in our shared economic space,” he said, as well as ways to increase Mexico’s economic competitiveness.

Mexico is a “special partner unlike others” to the U.S., he said, and has “made significant contributions to the U.S. economy,” particularly in communities along the shared border, including Tucson, Ariz., and Dallas.

“The importance of Mexico as a destination for U.S. exports is much more important than ordinary citizens on both sides of the border recognize,” he said.

In addition to a more bilateral economy, a key part of U.S.-Mexican relations will be a “21st-century border,” said Doris Meissner, a senior fellow at the Migration Policy Institute and former commissioner of the U.S. Immigration and Naturalization Service under President Bill Clinton.

After a boom in immigration from Mexico, net migration to the U.S. has hovered around zero, as many move back to Mexico or simply never leave the country to begin with.  Border enforcement aimed at reducing illegal immigration will shift to encouraging legal flows of immigrants and trade that can benefit both U.S. and Mexican economies, Meissner said.

“A challenge with the border is to maintain the prevention of illegal entry and extend it as fully as possible,” she said, while also focusing on “building a bigger and more modern infrastructure for trade and legitimate travel.”

The ambassador’s visit came just one day before the Senate was expected to release its immigration reform bill.

Medina-Mora said his country has a strong interest in the bill, which will affect the nearly 12 million Mexican immigrants living in the U.S.

While he said that Mexico would be respectful of the U.S.’s domestic politics, he stressed that his country “has a strong responsibility toward our Mexico nationals here in dignity and opportunities” and will work to ensure both the U.S. and Mexico benefit from new legislation.