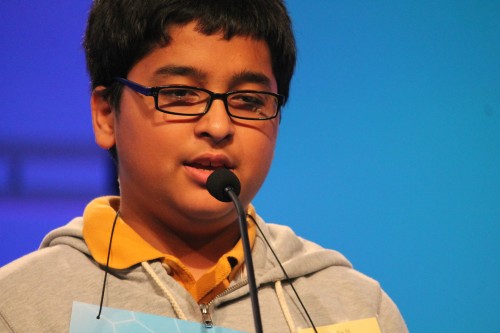 WASHINGTON—Two points were all that stood between Aditya Mishra and Thursday’s Scripps National Spelling Bee semifinals.

The 11-year-old from Lincoln advanced through Wednesdays’ preliminaries with fuselage in Round Two and geanticline in Round Three (easy words, according to him), but couldn’t quite make the 32-point threshold required to compete in Thursday’s semifinals. A winner will be named in the final round Thursday evening.

Just 42 spellers—not 50, as expected—were called to the stage to receive their semifinalist certificate, leaving 239 others to go home in tears or, in Aditya’s case, in a smile.

“If I got like a 20, like some people did, I’d be like, ‘Oh, ok, I didn’t get any chance,” the sixth-grader from Excelsior Elementary School in Roseville said. “But I got a 30. I’m pretty happy about that, because I only lost by two points.”

It was “silly mistakes” on Tuesday’s vocabulary test results (he got 18 out of 24 correct) that did him in, his father, Anil Mishra, said.

All 281 competitors—some from as far away China and Ghana—went onstage in the preliminaries Wednesday morning.

Aditya more than held his own as one speller after another faltered on words like cynosure, commissar and voortrekker. He appeared calm onstage, but after Round Two, he admitted he had been so nervous he couldn’t even remember the word he had just spelled.

“I honestly forgot,” he said after coming off the stage. “I don’t know why. I always, like, brain-freeze when I’m onstage.”

During a break before results were announced, Aditya said he felt confident that he could move on, but apprehensive about once again being in the hot seat onstage.

“I know it’s at higher stakes now,” he said. “There’s a lot of good people out there.”

Now that the stress of the competition is off his shoulders, Aditya can focus on sightseeing in the capital and spending time with his family and new friends. He said there have been “a lot of good parts to this week, it’s hard to pick a favorite.”

He certainly wasn’t feeling the sting of defeat; rather, he said he was already planning to compete in next year’s competition. And with two more years to compete and such a strong showing his first time around, the National Spelling Bee stage hasn’t seen the last of the Mishra family.