Three ways not to get tricked by jerky pet treats

WASHINGTON – Pet owners are seeking safe, healthy treats in the aftermath of a Food and Drug Administration update on an investigation into jerky treats causing illnesses in cats and dogs.

In a letter to veterinarians Tuesday, the FDA said there have been “3,000 reports of illness involving more than 3,600 dogs, 10 cats and including more than 580 deaths.” 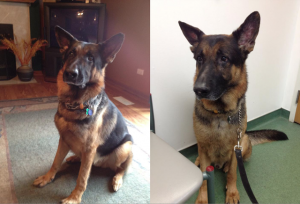 No pet owner wants their beloved pooch or kitty to go from this face… to this one. Unfortunately an FDA update says many people who sought to reward their pets with jerky treats ended up taking a trip to the vet. Summer Nettles/Medill

A salt cured, dried meat that appears to be produced from a single source, such as chicken, jerky is often used as a reward for pets.

The FDA said it has traced the majority of the illness-related jerky treats back to China.

“We’ve been investigating these illnesses since 2007, and the one thing that they have in common is that the pets have eaten jerky treats from China,” Siobhan DeLancey, veterinary medicine team lead at the FDA wrote in an email.

However the origin of the problem has yet to be determined.

“Food being imported into the US has to meet the same standards as food produced in the US. We’ve been to China to inspect the different production facilities, but haven’t found any meaningful difference or reason for the problem in the manufacturing process.”

What now for pet owners?

Once your pet consumes the tainted treats, illness can strike quickly.

“In some cases it will hit just like a toxin will hit” with symptoms such as diarrhea, vomiting and loss of appetite.

There are symptoms to watch out for.

Dr. Rachel Willard of Flossmoor Animal Hospital in Illinois said, “Diarrhea sometimes can have mucus or blood.” The stool can be more black and tarry if animals are bleeding in their intestinal track.”

• Buy American:
“I advise buying products made in the USA and also avoiding the pig ears because of salmonella,” Willard said.

• Look at the ingredients:
Amoroso said, “where you get in trouble is these multifaceted treats that look like a hot dog with a piece of bacon sticking out of it. Those are made to appeal to the humans. Look for a single ingredient like salmon.”

Julie Paez, a pet food and accessory store owner, said, “looking on a bag you want to see something that says free-range, and then hormone free or antibiotic free.”

• Check the treats you have at home:
“If anything is being traced as a product or byproduct of China we’re saying ‘stop feeding it to them,’” Amoroso said, speaking for his veterinarian practice.