The report by the Idea Works Company, which provides customer service consulting and research to airlines, pulled data from 176 airlines on service fees, including baggage fees, a la carte services and onboard food and beverage sales. 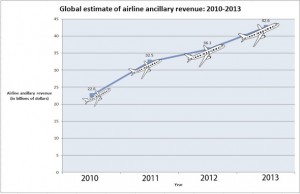 Airline service fee revenue, including checked baggage fees, a la carte services and other ancillary sales increased from $22.6 billion in 2010 to an estimated $42.6 billion this year.

“We are now entering an area where the airlines are becoming retailers,” said Jay Sorensen, president of the Idea Works Company and author of the report. “So instead of a simple price, the experience is more like going into a grocery store and buying a number of different items, putting them in your basket and checking out.”

“They are redefining airfare to mean base price,” said Paul Hudson, president of Flyers Rights, a nonprofit consumer organization representing airline passengers. “What happens is that when you go to the third-party website, like Kayak PCLN +4.55%  or Expedia EXPE +1.85%  , you will come up with the lowest airfare but not the lowest cost in transportation. Obviously they’re [airlines] private corporations. They’re also in public service, and there needs to be limits on unfair business practices.”

Hudson said base airfare should include the ticket price, carry-on luggage, at least one checked bag under 50 pounds, and a drink and light snack during flight.

An earlier report by the Idea Works Company, which surveyed 53 air carriers worldwide, also found that Spirit Airlines SAVE +5.64%  , Allegiant Air ALGT +2.32%   and Jet2 were among the airlines that profited the most from ancillary revenue. For Spirit, about 39% of its total earnings last year were service fee charges; that figure was 30% for Allegiant and 27% for Jet2.

“We’re a business, and we have a responsibility to our employees and shareholders to make money as a business,” said Allegiant Air spokeswoman Jessica Wheeler. “It’s not about any one thing or any one fee. It’s about holistically being in the mindset of keeping costs low at every turn.”

Allegiant Air ancillary fees include $5 for priority boarding, $15 to $35 each for the first two checked bags and up to $75 to reserve a seat.

Spirit Airlines charges similar fees, including $25 for a carry-on bag, $1 to $50 for reserving a seat prior to boarding and $20 for the first checked bag.

“What we’re able to do is give them a really low base fare, and if they don’t want to bring a checked bag, they pay an even lower fare,” said Spirit Airlines spokeswoman Misty Pinson. “For airlines that say their bags are free, they’re not really free. They’re included in your [higher] ticket price.”

Airlines with the lowest percentage of total revenue from ancillary fees generally were international carriers, including China Southern, Emirates and Garuda, each with less than 1% of total earnings from such fees, the report found.

Airline prices have risen at a slower rate than disposable income and the consumer price index, according to Airlines for America, a national organization that represents U.S. air carriers.

Domestic air travel, including fare prices and ancillary fees grew by 20% from 2000 to 2012 compared with a 49% increase in per capita disposable personal income and a 33% increase in the consumer price index, Airlines for America found.

If airlines are not allowed to separate ancillary fees from overall ticket prices, customers will be forced to pay more for air travel, said John Heimlich, vice president and chief economist at Airlines for America.

“By bundling, I’m deterring that person from traveling,” Heimlich said.

Sorensen predicted that ancillary revenue and fees will continue to increase in the future.