On Tuesday, politicians, advocates and the public tweet with a hashtag #Fight4DAPA to show support for the blocked immigration programs. (Andersen Xia/Medill)

WASHINGTON – A day immigration advocates thought would be a time for celebration instead was filled with concern because of stalled Obama administration programs that would have been open for application Tuesday.

“Today is actually a sad day when it should have been a day of joy for many of our immigrant families in this country,” Rep. Ruben Gallego, D-Ariz., said at a news conference held by House Democrats to support the blocked programs.

The new Deferred Action for Parents of Americans and Lawful Permanent Residents, announced by President Barack Obama in November 2014, was put on hold in February after a federal judge in Texas issued a temporary injunction. So too was the expansion of Deferred Action for Childhood Arrivals, which was scheduled to go into effect three months ago.

The two programs were set to halt possible deportation of millions of undocumented children, parents of U.S. citizens, and lawful permanent residents for more than two years. But now applicants are left in limbo. 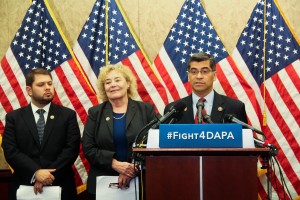 House Democrats hold a news conference in the Capitol Hill to support Obama administration’s deferred action programs that would have been taken into effect on Tuesday. (Andersen Xia/Medill)

“[The Republican governors] found probably the worst judge in the United States in Texas and filed a case there,” Rep. Zoe Lofgren, D-Calif., said. “The truth is that millions of people are being punished.”

District Court Judge Andrew Hanen, whose ruling prevented the two programs from taking effect, said in a 123-page memorandum that they might result in “a substantial ‘shadow population’ of migrants.”

At the Capitol Hill event Tuesday, Rosario Reyes, who came to this country from El Salvador 11 years ago without her eldest son, spoke on behalf of the parents affected by the suspension. “For me, I just hope one day I can fulfill my dream, which is to see my son,” she said through an interpreter, weeping. “It’s so difficult to separate from your loved one. I think it’s time to end this family separation.”

The lawmakers who say they have been trying to fix the immigration system for decades are hopeful that Congress will undo the injunction soon.

“We are working hard with the administration, with many of our colleagues here in Congress to try to make progress,” Democratic Caucus Chairman Xavier Becerra, D-Calif., said. “We are able to say we are ready and waiting for the opportunity to get going to help all these families who want to come out of the shadow.”

Democrats stand with immigrant parents working for a better life for their families. #Fight4DAPApic.twitter.com/njeuCVzrNV

We shouldn’t break up hardworking families who contribute to our economy and our society. I’ll #Fight4DAPA. -H

“Their goal is not just to stop any type of reform,” Gallego said, “but to instill fear within the immigrant community and doubt. They will continue to do this.”

But Republicans insisted Democrats had shut down the immigration debate in Congress.

Johnson spoke Tuesday at a forum sponsored by American Principles in Action, a nonprofit that says it is dedicated to preserving principles advocated by American founders. 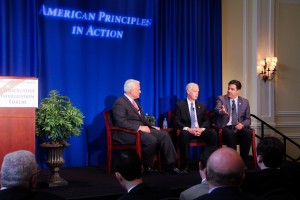 Republican representatives accuse Democrats of shutting down the conversation with them at a conservative immigration forum held on Tuesday by a nonprofit, American Principles in Action. (Andersen Xia/Medill)

The group also provided Congress with another idea that would drive the immigration debate in a different direction.

The plan, drafted by American Principles’ Latino partnership, includes securing the border, mandating businesses hire only citizens or individuals with legal status, fully implementing an entry and exit registry, and permitting employers to hire foreign workers only when a U.S. citizen is not available. Only when those steps are in place could Congress consider providing a path to legal status for undocumented immigrants.

“We need to lay out all the different reforms – I think there are dozens,” said Johnson. “The first step is wake up to reality, bit by bit, step by step, and again, finding agreement with Democrats.”

But Becerra disagreed. “It’s not a matter of doing it piece by piece,” he said. “It’s a matter of getting it done. Get it done in the right way. We are not interested in seeing what pieces Republican would leave behind.”

Rallies were organized across the country this week as advocates protested the lack of action. In Washington, labor leaders, workers and community activists vowed Monday that they would defend Obama’s deferred action programs and push forward for true immigration reform.