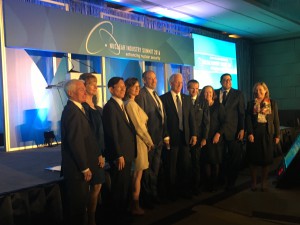 The Nuclear Industry Summit attracted more than 350 industry leaders from around the world. Started in 2010, the summit – and the larger Nuclear Security Summit – are part of President Barack Obama’s initiative to secure vulnerable nuclear materials, break up black markets, and detect and intercept illicitly trafficked materials.

“There are now 442 nuclear power reactors in operation in 30 countries. Another 66 are under construction, mostly in Asia,” said Yikiya Amano, director of the International Atomic Energy Agency. Amano said the global use of nuclear continues to grow despite the disaster in Japan five years ago.

“Total and sustained commitment to the principle of ‘safety fist’ is a must,” he said. “Nuclear safety will always be a work in progress.”

Industry executives and experts said nuclear power is expanding in developing countries. They said security issues are crucial in these countries.

Jorant said most of the expansion is happening in Southeast Asian and Middle Eastern countries, such as Jordan, Vietnam, and Thailand.  As many as 148 new nuclear plants could go up in these countries by 2050.

“It a different environment,” said Howard Hall, who serves as the director of the Institute for Nuclear Security at the University of Tennessee. Hall said local culture plays a strong role in the steps taken to keep nuclear plants safe. It is critical to consider regional solutions for nuclear security, Hall said.

Some people remain concerned about nuclear safety, despite the opportunities for increased energy output and the emphasis of industry leaders on proper training, document transparency, and strong government regulation. 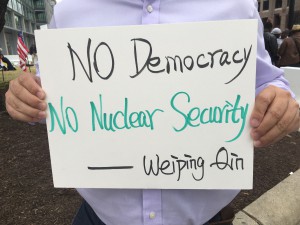 However, since most of mainland China’s electricity is produced from fossil fuels — predominantly coal — the advent of nuclear energy has helped reduce air pollution.