Protests get tense in Cleveland at the RNC 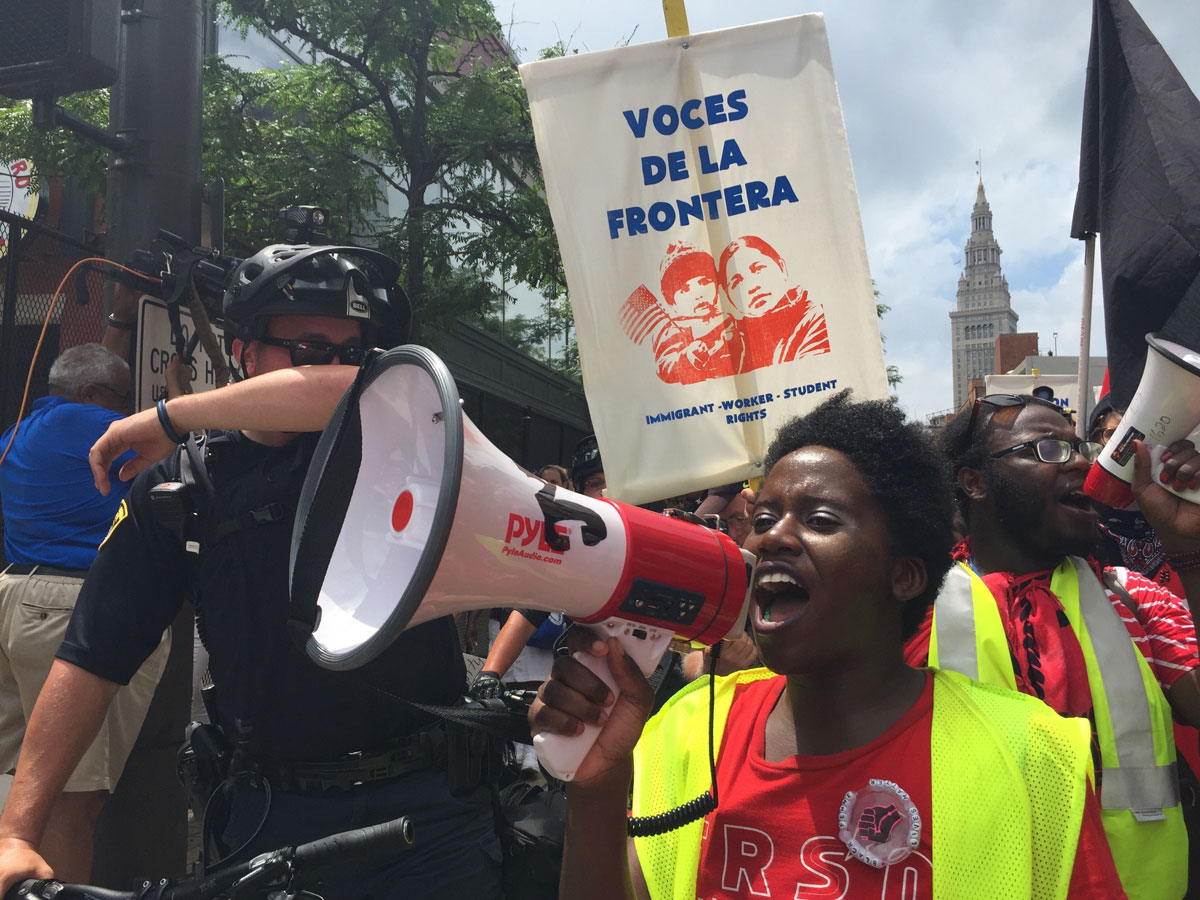 Various people and protesters gathered in downtown Cleveland during the weeklong Republican National Convention, from July 20 to 23. Here are a couple highlights from the event. All stories originally appeared on USATODAY.com during the week of the convention.

The Rev. Wendy von Courter said she and other Mijente protesters were there for one reason: “To continue to draw attention to what a vote for Trump means. It’s a vote against blacks and Hispanics.”

The group planned to continue its protest throughout the day in other parts of the city near the convention, symbolically giving Trump the wall he wants, said Ernesto Lopez of Mijente.

Mijente was joined by members of several other groups that support their cause.

“United We Dream Action is here in support of Mijente to block off the hate of the Republican Party,” said Austin native Sheridan Aguirre, 22, who also mentioned the larger goal of fighting misogyny, Islamophobia, Xenophobia and police brutality. “Our message is all encompassing because migrants come from all walks of life, and our identities and issues are interconnected.”

Although the streets of downtown Cleveland are filled with stands offering Donald Trump pins, bobbleheads and T-shirts, not all Republicans here are Trump supporters. 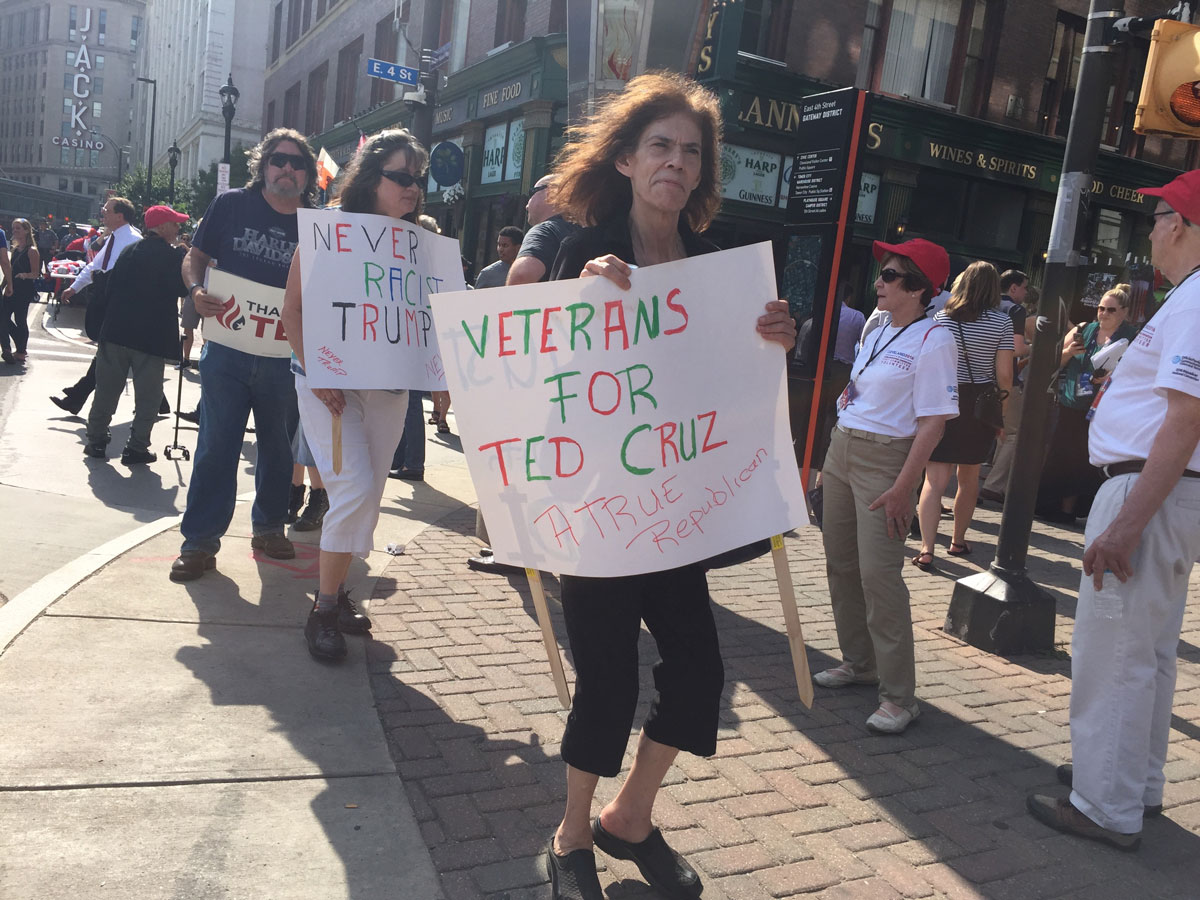 Austin, Texas-native Barbara Peters said she traveled to the Republican National Convention with a group called CRUZ to Cleveland Convention, which continues to back former presidential candidate Sen. Ted Cruz, against the odds. Peters said she and like-minded others have been tirelessly working to unbind the delegates, despite Monday’s failed vote to reject convention rules requiring delegates to vote for the candidate to which they are bound. .

“We’ve been working night and day, contacting all the delegates, the rules committee, (and) letting them know how we feel,” said Peters, adding her efforts are also to keep presumptive Democratic nominee Hillary Clinton out of the White House.

Some 30 volunteers from Planned Parenthood Advocates of Ohio circled the streets of Cleveland on Tuesday during the Republican National Convention, demonstrating their opposition to cuts in healthcare in Ohio and nationwide.

The volunteers split into three groups protesting at various local landmarks, including theRock and Roll Hall of Fame and First Energy Stadium, said Erica Sackin, the political communications director with the Planned Parenthood Federation of America.

“We’re out here protesting attacks to care that Planned Parenthood provides to Ohio and across the country,” Sackin said. “These health centers serve millions around the country, and for some, it’s their only healthcare provider.”

The volunteers plan to gather closer to the perimeter of the convention at the Quicken Loans Arena on Wednesday, where they will hand out “Protect Yourself from Trump” condoms. 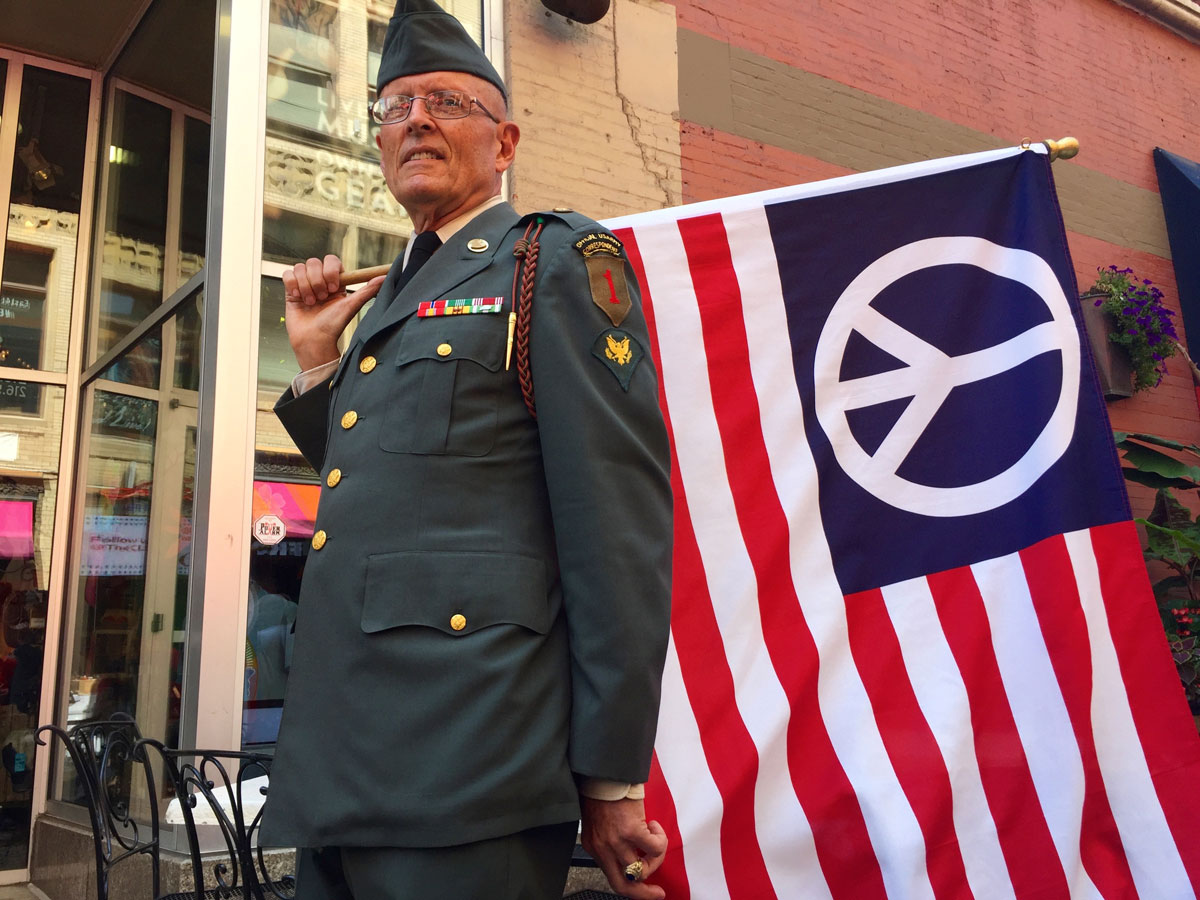 The Shaker Heights, Ohio, native knows the image he’s presenting is “something not too many people are going to forget,” and he says it’s helping him explain there are veterans who are for peace.

“I’m trying to get across an alternate message here that there needs to be a counterweight to all the mindless, macho flag-waving, red, white and blue, star-spangled war-mongering that we hear from politicians that have never been in a war, never will be in a war, and have no qualms about sending American men and women in uniform to harm’s way,” said Pumphrey, who spent a year in Vietnam and was discharged in July 1968.

Code Pink protesting a ban on tennis balls at the convention,arguing the ban should be on assault weapons #RNCinCLE pic.twitter.com/90xuIKdjwD

From the Code Pink protest that was just broken up. #RNCinCLE pic.twitter.com/0wE2VpeGhZ

Cassandra Franklin of Cleveland Heights is a bystander at the Code Pink protest, getting her confiscated. #RNCinCLE pic.twitter.com/DQUAyMdbx3

From Cereal to College

With the help of Donald Trump, Hillary Clinton and generic cereal, New Jersey native Darrin Maconi, 27, is trying to send his friend to college. 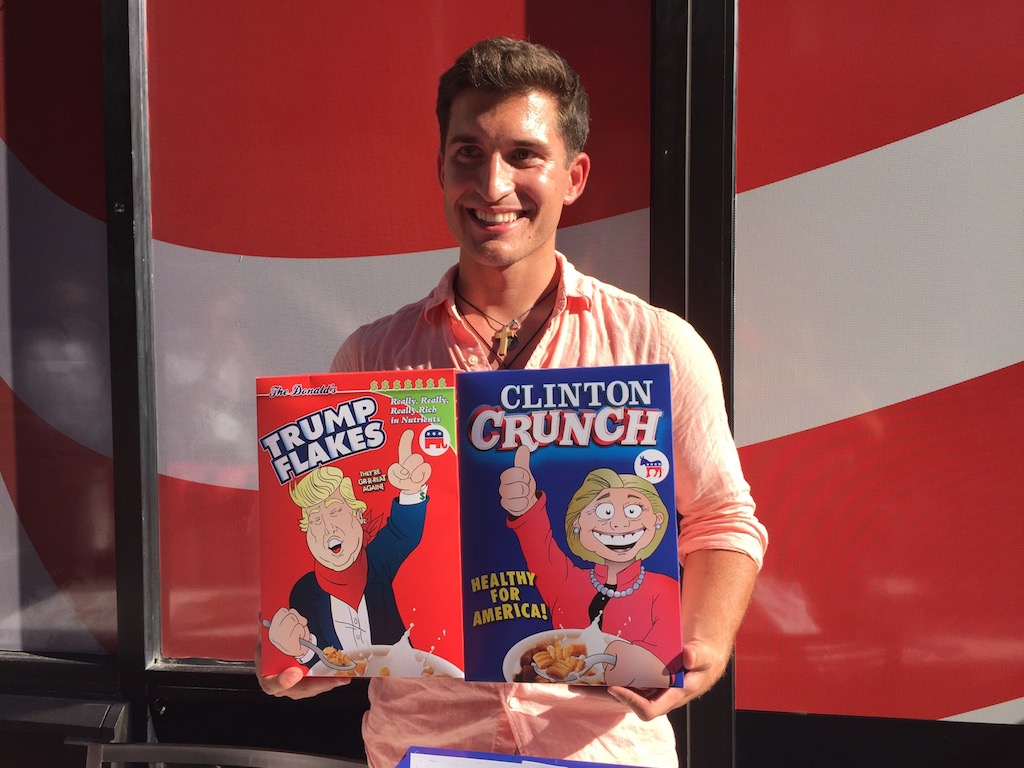 He designed boxes of Trump Flakes and Clinton Crunch to sell at the Republican National Convention this week in Cleveland to help fund his friend’s tuition to Brookdale Community College. Each box has a caricature of the candidates on the front with a board game on the back of Clinton’s and a word search on the back of Trump’s.

“There’s got to be some finesse to it,” said Maconi, who was camped out at Euclid Ave. and East 4th Street. “If you had a box of Ronald Reagan flakes from 50 years ago, you would never eat that. You would keep that right?”

Starting the convention with 1,000 boxes split evenly, Maconi sold 400 boxes by 6 p.m. on Monday — 300 of Trump Flakes and 100 of Clinton Crunch. If he doesn’t sell out by the end of the convention Thursday, he said he’s headed to Philadelphia for the Democratic National Convention next week.

Protesters shout about overthrowing the system, attempt to burn a flag. One woman was arrested. #RNCinCLE  @USATODAY pic.twitter.com/qiFPn4Bz48

A protester was arrested for burning a flag, seen being detained by police. Raw video #RNCinCLE @USATODAY pic.twitter.com/WRMKZdD8sH