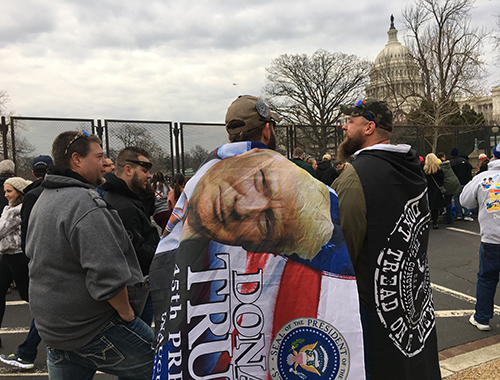 R.J. Tanner of Lucedale, Miss. and friends awaiting for President Trump to be sworn in. (Marianna Brady/Medill News Service)

WASHINGTON – Mississippians from the Gulf Coast expressed hopes for national unity as Donald Trump was sworn in as the 45th President of the United States on Friday and said the new president should be able to promote business in Mississippi and around the country.

“I’ve been a follower and fan of Donald Trump a long time,” said Mark Cumbest, who had been a delegate to the 2016 Republican National Convention. “I’m a businessman, and I feel so strongly that the office of the President needs to be occupied by a businessman. Donald Trump, whether you like him or not, has been very successful.”

Justin Skinner, who served as chairman of the Trump campaign in Harris County, agreed with Cumbest and said that President Trump was right to stress unity in his inaugural speech.

“I think that it was his intention of his speech to unify the country and give a good understanding of where he stands and what he’s looking for our future.” “I think his speech was absolutely amazing,” said Skinner.

The new president pledged in his inaugural address that the country “will start winning again [and] winning like never before” Under his new administration, Trump reaffirmed his intent of carrying out many of the ideas he had discussed on the campaign trail.

“If the people of the United States would start to realize the true passion and love” Trump has for America, Skinner said, “then maybe we can start to unify.”

In the inaugural speech, Trump called for restoring jobs for Americans lost overseas and for securing the country’s borders.

Mark Schloegel, A Gulfport native, said that much of Trump’s address had repeated themes he mentioned during the presidential campaign. “I think he just recounted what he’s being talking about on the campaign, said Schloegel. “I don’t think he said anything new, but it’s basically what he’s been promising on the campaign.”

Schloegel said that Mississippi businesses should also benefit under the new Trump administration. “Air, space, defense, ship building,” he said. “I think all of those …will benefit on having Trump. He’s a hospitality guy, he owns a lot of hotels. We’ve got a big tourism hospitality industry. He gets that. He’s visited Mississippi personally on multiple several occasions.”