WASHINGTON— Tiffany Brooks’s decision to come to Washington for the Women’s March on Saturday did not come lightly. It involved a 1,600-mile round trip, a 32-hour ride and leaving her husband back home in Moro, Illinois to take care of their two children.

But she felt she had to do it.

“He’s not very happy I’m here,” Brooks, 33, said of her husband, who voted for Donald Trump. “But I have two little girls at home, so it’s important for me to do this for them.”

Brooks and friends Karen Schmidt, Hannah Jellen and mother Desi Jellen all marched through the nation’s capital together with an estimated 500,000 other people, many of them wearing pink hats to speak out for women’s rights one day after the inauguration of Donald Trump.

“It’s a march against some of the horrible things [Trump’s] said and done, and to show that we are still here, said Jellen. “We’re not going to go away and we’re not going to roll over and be silent about things.”

The Illinois women all agreed this was the largest demonstration they had every attended. 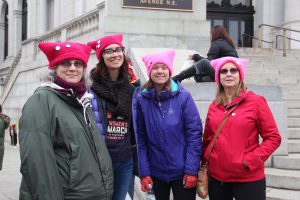 “I hope the legislators are looking out their window right now thinking, ‘Oh my god, what have we done?’” Desi Jellen, 54, of Edwardsville, Illinois, said as the group marched past the Capitol.

The women arrived in the city after a 16-hour overnight bus ride and planned to leave Saturday night after the march was over. At the end of their journey, they will have spent more than three times as much time traveling to the demonstration as they did actually marching.

But they said the trip was worth it, because the event sends a message of equality and solidarity to their own friends, and families and to elected officials locally and nationally, Desi said.

Desi said she was stunned in November when Trump beat Hillary Clinton, and when Republican Kurt Prenzler ousted Democrat Alan Dunstan for Madison County Board Chairman. Dunstan previously served on the board for 30 years. She said that Prenzler used similar rhetoric employed by Trump, claiming that the local government was corrupt and that only an outsider who could “shake things up” would make good.

“People decided to shake things up, and start over and add a person who has no idea what he’s doing,” she said, adding: “This is different, this wasn’t how it was before.”

Desi said she remembers when the Ku Klux Klan tried to march through Edwardsville in 1994. She said she and other locals marched against the KKK the day before the scheduled march, and were able to force cancelation of their event in the city. She hopes the Women’s March will have a similar effect on extremist policies.

“I think the next three years, 11 months and 30 days are going to be kind of bleak,” she said. But “being a strong woman means standing up for yourself and standing up for others if you need to.”