From Red to Pink: Women’s March Takes Over Washington During Inauguration Weekend 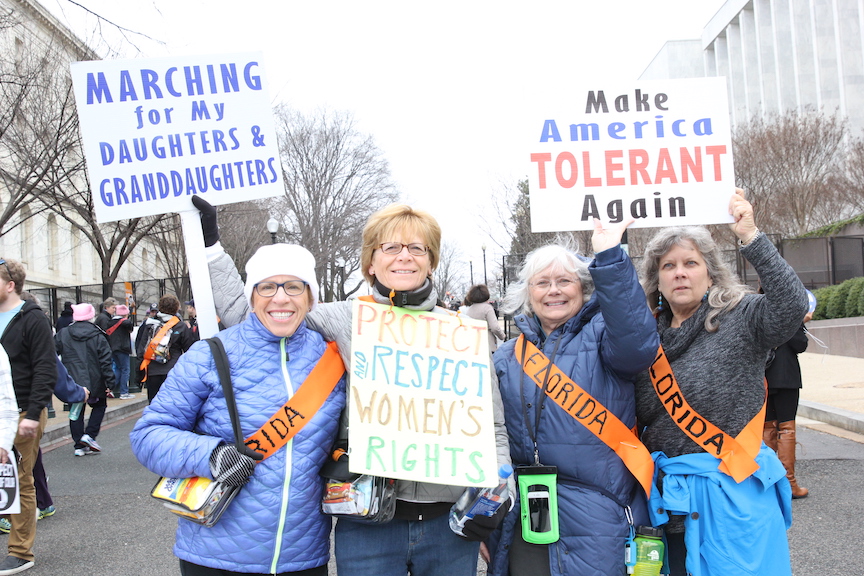 (L-R) Lita Small of Boynton, Susan Gregg of North Palm Beach, Christine Jackson of Tampa, and Laura Graves of Jupiter pass the Library of Congress on their way to the Women's March Saturday. (Taylor Goebel/MNS) ,

WASHINGTON: Red Make America Great Again hats disappeared Saturday, just one day after the inauguration of President Donald Trump, as hundreds of thousands of women marched down Independence Avenue to the White House, many wearing the iconic pink hats of the Women’s March.

“This election struck such a cord,” said Valerie Fisher, a therapist from Bradenton whose practice includes treating domestic violence offenders. “I have spent the last 21 years addressing men with a sense of entitlement. I don’t want our culture to give a pass to what I’ve been dedicating my life to.”

Women and men from Gainesville, Tampa, Miami and Bradenton were among the throngs of Floridians who traveled to Washington for the Women’s March in reaction to Trump’s election.

Marina Hodgini of Bradenton said, half-jokingly: “I think for the next four years I’m going to need an antacid.”

The National Mall area and beyond was a sea of rainbow flags and pink hats with a cacophony of chats such as “black lives matter” and “we want a leader, not a creepy tweeter” as protesters called out the new administration.

Fisher and her wife, Melissa Rhoads, are board members of Prism Youth Initiative, the only organization in Manatee County dedicated to LGBTQ youth. The annual Pride festival on March 18 will help Prism continue providing acceptance and advocacy services to at-risk youth.

Mary Bode, who also volunteers for Prism, said diversity brings a more progressive attitude and sense of community to society.

“When we take a look at other cultures and are able to see them as equals, it gives us the option to take on other points of view,” Bode said.

Autumn Solomon-Phillips of Sarasota marched with her 71-year-old mother, Jan Solomon, who said she decided to come despite recent knee surgery “because I want to be moving forward, not backward.”

Organizers have estimated that up to half a million demonstrators showed up. Washington Metro officials reported more ridership during the Women’s March than on Inauguration Day.

“I want Trump to know that American women will not be silenced,” said Lynne Daniels of Miami. She is leaving Saturday night after being in D.C. for only 12 hours. Daniels said the 20-hour bus ride “involves a lot of personal discomfort but it means a lot to make a statement here.”