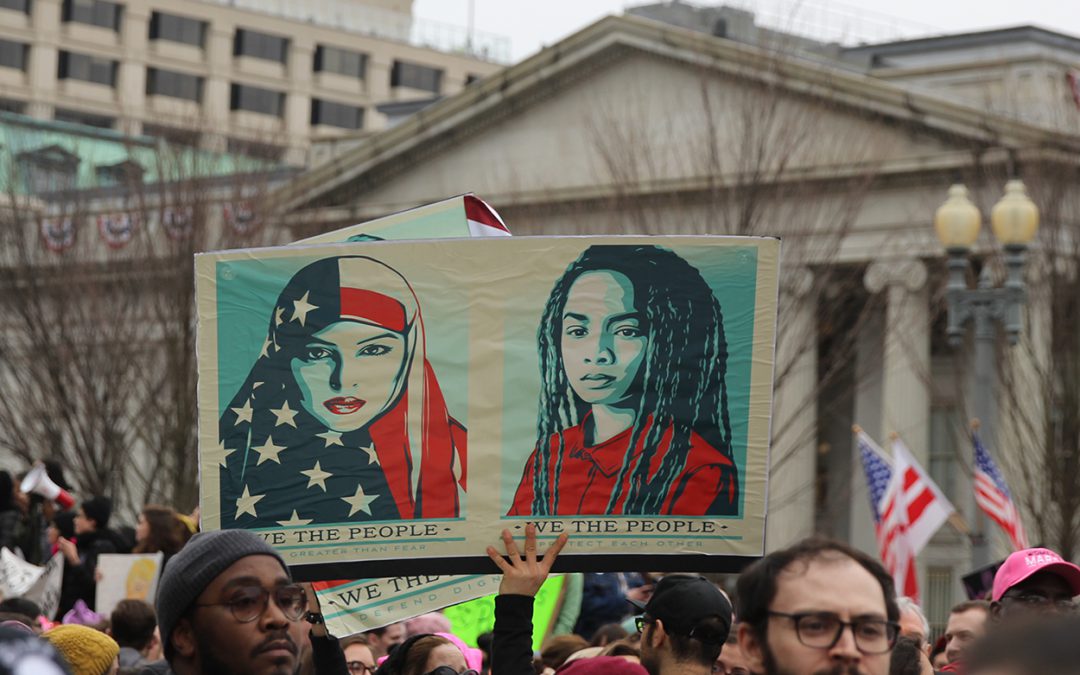 Protesters at the Women's March on Washington expressed solidarity with Muslims and refugees, whom President Donald Trump and his supporters have repeatedly vilified. Jan. 21, 2017. (Maryam Saleh/MNS)

WASHINGTON—Democratic lawmakers and activists were quick to condemn the sweeping executive order President Donald Trump signed late Friday afternoon singling out Muslims in demands for “extreme vetting” to block the entry of terrorists.

The executive order temporarily bars nationals from Iran, Iraq, Libya, Somalia, Syria, Sudan and Yemen from entering the United States. It also imposes a 120-day suspension of the U.S. Refugee Admissions Program and a review of refugee vetting procedures, with an exception for refugees who are religious minorities in the countries of origin; directs the Department of Homeland Security to indefinitely stop processing Syrian refugees; and cuts the maximum number of refugees to be admitted this fiscal year from 110,000 to 50,000.

“We want to ensure that we are not admitting into our country the very threats our soldiers are fighting overseas,” Trump said before signing the statement at the Pentagon, following the swearing in ceremony of Secretary of Defense James Mattis. “We only want to admit those into our country who will support our country and love deeply our people.”

Sen. Kirsten Gillibrand, D-N.Y., slammed the presidential order, and took special exception to the treatment of Syrian refugees. Trump’s decision “flies in the face of our New York values and the foundation on which this country was built,” Gillibrand said in an emailed statement. “Our willingness to take in refugees is not only the right thing to do, but it also helps make our country safer from terrorist threats and shows millions around the globe that America cares for children and families facing strife and persecution.”

She pledged “to continue to stand with immigrant and refugee families and I will fight in the Senate to protect them.”

Rep. Kathleen Rice, a New York Democrat, said the order is “un-American” and promised that House Democrats would push back.

“President Trump apparently decided that it would be harder for people to pay attention if he followed through on all his nationalistic campaign promises at once in his first week in office,” said Rice, who sits on the House Committee on Homeland Security. “Most Republicans in Congress seem to be OK with that as long as he eventually gets around to cutting taxes,” she said in an emailed statement. “But we’re going to hold them accountable and make sure the American people know what this is administration is doing.”

Former Secretary of State Madeleine Albright described the directive as a “cruel measure” that departs from America’s long history of welcoming immigrants, will directly harm American security interests in the Middle East, and is based on fear.

“I have no doubt that, if given the opportunity, [Syrian refugees] will become an essential part of our American fabric,” she said Thursday during a telephone news conference organized by Refugee Council USA, a coalition of organizations focused on refugee protection.

Syrian advocates say they are troubled by the indefinite nature of the executive order, which orders the State and Homeland Security departments to stop processing and admitting Syrian refugees “until such time as I have determined that sufficient changes have been made to the USRAP to ensure that admission of Syrian refugees is consistent with the national interest.”

Bassam Rifai, who is the public relations chair for the Syrian American Council, a national grassroots group that advocates for a democratic Syria, said his group is reaching out to the Trump administration to discuss Syrian refugees.

“We want to introduce them to refugees who have been resettled here in the United States, and we want them to understand the extremely rigorous vetting process they’ve gone through,” said Rifai, a Syrian American. “You’re talking about the most vulnerable, the people who have been most affected by the war, the people who are running away from [Syrian President Bashar] Assad and ISIS, and you’re stopping them from entering and having a safe place [to stay].”

Of the 25,671 refugees resettled in the United States in the first three months of this fiscal year, 3,566 are Syrian, according to the Department of State.