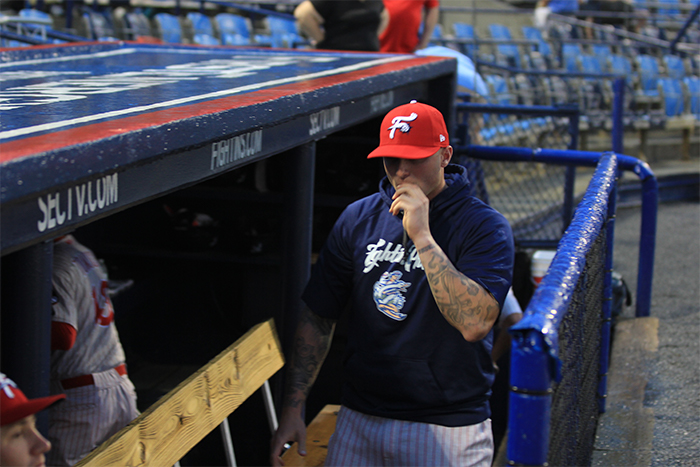 READING, PA – Ten-hour bus rides, rooming with six other guys just to keep the cost of rent manageable and making less than $40,000 a year – 27-year-old Nick Rickles chose that lifestyle to pursue his career goal.

Rickles, a catcher on the Reading Fightin Phils, would love to be called up by the Philadelphia Phillies – or any major league team. The low just-getting-by life in the in the minors is just part of the deal.

“The cons are the travel and finding a job in the offseason because you really don’t make money during the season,” said Rickles. “You get used to it as you play. It’s kind of a do it for the story type of thing.”

Rickles has been in the minor leagues since being drafted by the Oakland Athletics in the 14th round of the 2011 Major League Baseball Draft.

The five years since then haven’t deterred his drive of making it to the “big show,” even after missing the entire 2014 season with a torn labrum in his right shoulder sustained by a swing at bat in spring training.

“It was terrible,” said Rickles.

Three years in the minors along with a torn labrum in his throwing shoulder had Rickles questioning whether or not it was the end of his career.

“The next year I came back and I expected to be back where I was talentwise, positionwise and playwise,” he said. “It was a setback.”

But his father was right there to pick him up. In fact, his father played a big part in the reason he’s playing baseball today.

Growing up in Fort Lauderdale, Florida, Rickles played multiple sports. Football was one of his favorites, but his parents weren’t fans of their son playing such a violent sport.

“I was a quarterback and wide receiver (in high school),” he said. “I don’t want to say my dad made the decision for me but just for the sake of not getting injured they weren’t big on football so my freshman year I stop playing and stuck to baseball.”

Fast forwarding to present day, three years after his injury: The minor league grind to get to the MLB is still in full force.

“It’s the love of the game, I’ll rather be during this than anything else, you have to it grind out,” said Rickles. “The pay is not great but it’s not about that it’s about doing something you love for as long as you can.”

Rickles might love the game but the minor league pay isn’t much, so during the offseason, he picks up a job in between training for the next season.

“Last offseason I worked for Enterprise rent-a-car I basically drove people around,” said Rickles, chuckling. “It was alright but it wasn’t for me.”

Knowing that nothing is promised in the minors and you’re on the team because of how much you sacrificed, how much you’re grinding on and off the field and how bad you want to make it to the “big show.”

Rickles said his grind in the minors to the MLB will likely continue for maybe five more years. And once he gets there he’ll be satisfied whether it’s in a starting role or coming off the bench it doesn’t matter as long as he can say he “made it.”