From Third Down to Every Down 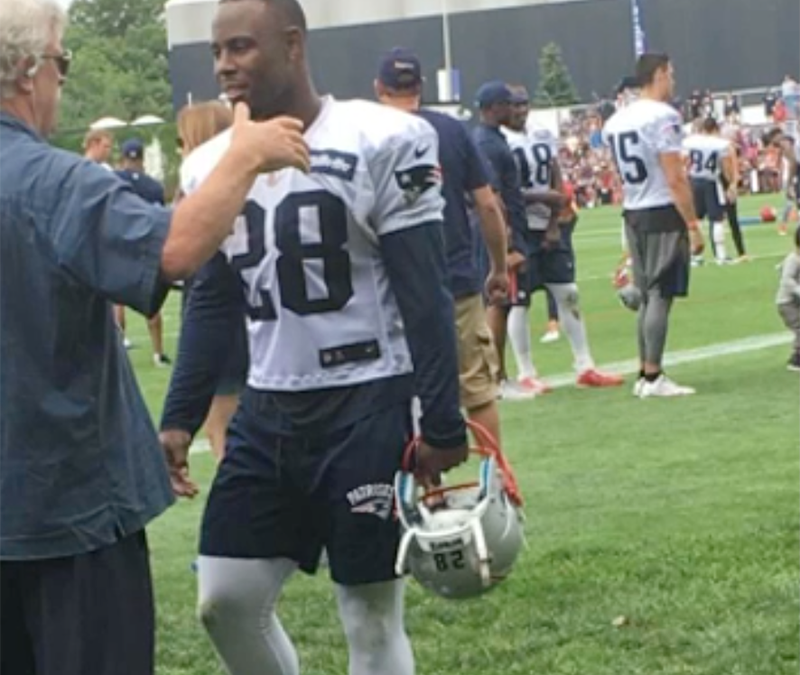 FOXBORO, Ma. — In Super Bowl LI, the Patriots struggled early to run the ball with their big bruiser, LeGarrette Blount. The team then swapped the traditional running back for smaller, more agile James White. White then played 72 percent of the team’s snaps, proving instrumental in the Patriots’ shocking comeback over the Atlanta Falcons, scoring three touchdowns.

With the increase of passing and faster defensive talent, the NFL has gradually shifted toward fast elusive scatbacks like White. Once viewed as situational, role-type players, scatbacks today are often used as the focal running back.

“The reason why teams are leaning on that more is because it makes them more versatile offensively,” said Fox Sports NFL analyst and former NFL tight end George Wrighster. “It’s all about creating mismatches on defense.”

The Carolina Panthers’ selection of Christian McCaffrey with the eighth overall pick in the 2017 NFL Draft is the latest example of the trend. The 5-foot-11 McCaffrey, at 202 pounds, is known more for his speed (4.48 seconds in 40-yard dash), quickness and versatility rather than strength and power.

“I think this is a guy that you can get the ball into his hands in many different ways and quick,” said Panthers head coach Ron Rivera at a press conference after the draft.

“With so much passing across the league now, the days of the 300-carry, 350-touch a season running back are dying out,” said Kacsmar. “Running backs aren’t any different in the way that teams are looking for capable receivers and pass protectors who can perform well on third down when most teams look to pass instead of run.”

According to statistical research done by Inside The Pylon’s Dave Archibald, seven teams clearly used specialized roles for running backs during the 2015 NFL season, including the Patriots, who benefited from scatbacks more than any team.

Besides White, New England also employed Shane Vereen in this role during Super Bowl XLIX and Danny Woodhead in Super Bowl XLVI in 2011 as well as Kevin Faulk and J.R. Redmond in four Super Bowl appearances during the 2000s.

“Whenever the game was on the line, whenever we weren’t running in between the guards, I was in the game,” Redmond said.

For the 2001 Patriots, the season was on the line in Super Bowl XXXVI when Brady, Redmond and the rest of the players on the field took the huddle tied 17-17 witih the St. Louis Rams with 1:21 to play.

Brady’s next three completions were to Redmond, who fought his way out of bounds at the Patriots’ 41-yard line on his third catch, stopping the clock at 33 seconds.

“According to {Bill} Belichick and Charlie Weis it was the most pivotal play in that sequence of plays,” Redmond said. “Stopping the clock there was huge. I remember getting up field and them yelling, ‘Get out of bounds, get out of bounds.’”

But the Patriots were not the first team to invent the position. Its origin dates back to 1983, when Washington Redskins head coach Joe Gibbs utilized Nick Giaquinto as the first H-Back (offensive back who lines up in the slot) in NFL History. It was part of an innovative strategy implemented by a team that had won the Super Bowl the year prior.

In college, Giaquinto was a primary back at the University of Connecticut, running the ball 20 to 30 times per game. He still holds the school’s single-game rushing record — 277 yards versus Holy Cross in 1976.

At 205 pounds, Giaquinto wasn’t puny. But he was more of a finesse, all-purpose player who could catch and run the ball. Gibbs called him “The Trashman” for his ability to fill a number of roles, when needed, and clean up the team’s messy situations.

“With (John) Riggins we were a big running team,” said Giaquinto. “However, when we were in second-and-long, or third-and anything, we’d love to get receivers in there. It just kind of evolved for different situations.”

In 1983, Giaquinto produced a statline that was unique for a running back. He was much more of a threat in the passing game, garnering a career-high 372 yards on 27 receptions, with just 53 rushing yards on 14 carries.

That trend has now leaked into the college game, with teams running more pro-style offenses with scatbacks and slot receivers.

“From my experience, creating mismatches was key,” said former NC State scatback and slot receiver Dayton Campos. “Linebackers or safeties were not fast or quick enough. I would usually be two yards off the ball, which allowed me to already make a move at full speed to beat the coverage. The rule changes are what our coaches would always say was the reason it was turning into a passing/offensive league.”

Teams of all leagues are always looking for a new advantage, and Wrighster says that’s why scatbacks provide an advantage that’s similar to that of the defending NBA champions.

“The league {NFL} is evolving like the NBA is,” said Wrighster. “There have always been really good three-point shooters, but no one would put four three-point shooters on the floor at once until recently. The {Golden State} Warriors shoot the ball so well that they have been able to create more space on the floor. Teams were resistant to take their big guys off the floor because they thought they had an advantage.”

In June, The Warriors won their second NBA championship in three seasons. New England has won two of the past three Super Bowls, and five championships since 2001 in part by implementing scatbacks more than just situationally. It’s no wonder more teams are following suit.