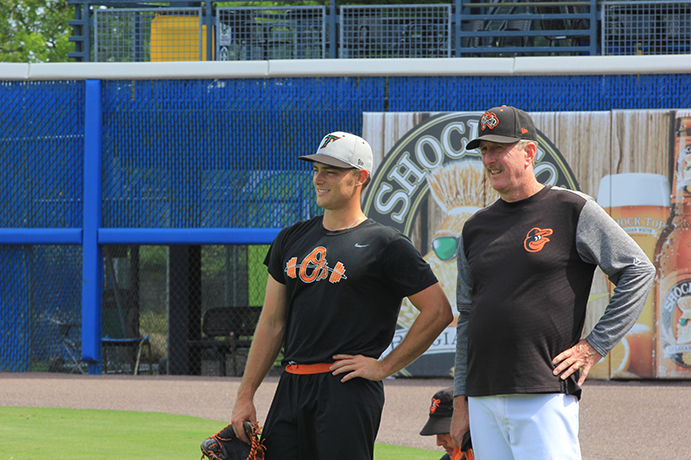 NORFOLK, Va. — Tyler Wilson, a 27-year-old pitcher of the Norfolk Tides, shares his thoughts and experiences in both the minor leagues and MLB. Wilson played college baseball at the University of Virginia and was drafted in the 35th round of the 2010 Major League Baseball Draft. He was interviewed at the Norfolk stadium before a Tides game with the Scranton RailRaiders on July 25, 2017.

Question: How was your journey coming up? In high school and in college?

Answer: It was great, I’ve actually being really spoiled. I grew up in Virginia I’ve been in Virginia my whole life in high school and college. And now in minor league baseball, all the affiliates are pretty close, three hours away between Salisbury all the way up to Norfolk. Baltimore is close, the hometown team essentially. So, the journey has been a long one, I’ve been playing the game for a long time. It’s showed me a lot of the world and taught me a lot of lessons. It’s been great.

Question: Do you get a lot of family members at your games?

Answer: I do. I’ve been really fortunate my family has been really supportive of me and they come to as many starts as they can. Like I said being close is really, really nice. That’s been a real blessing.

Question: How was your first big league experience?

Answer: It was wild. It was 2015 so it was two and a half years or so from now but it never gets old. The big leagues are something you work your whole life for and when it actually happened it was pretty surreal. I think the best part of the experience by the way was picking up the phone and calling my dad, my mom and my wife and saying, ‘hey we did it.’ Because as much as the journey is about me taking it to each level, playing, improving and earning my spot. Those guys [his family] made a bunch of sacrifices to be right there along the side of me. So, to be able to share that moment with my family and really close friends was better than anything that the game could have given me.

Question: How is it with your family, never knowing when you’re going to get that call-up?

Answer: That’s probably the hardest part for me. Having my wife here with me it’s tough where we have to pick up and go sometimes and be in a different city, a couple hours away overnight. It could happen at any moment, so it’s really taught her as a type A person to be spontaneous. That’s been a great valuable life lesson. Ultimately the biggest point to take away is there’s just so many things that are outside of our control, especially in the game. But, it’s a great metaphor for life too, to just be able to take things in stride.

Question: What’s the difference between the Minors and the bigs?

Answer: Definitely, the stadiums are different, the amenities off the field are different and the players are different. Some of those guys are a little bit older, more experience and they’ve been around for a long time. It boils down to the game being the game and you have to trust in your process, trust in the things you’ve done to get to that point. You can’t just abandon ship when you get to the biggest stage and think that things are going to go better and you’re going to become a different player just because now you’re in the big leagues. The game is still the game, there’s still some challenges within it. Your mistakes are exposed a lot more up there [in the MLB], no discredit to this league.

Question: What are some pros and cons?

Answer: The cities are awesome in the big leagues you see the whole country when you’re in the Major Leagues. Whereas here in Triple A you are kind of portioned here to the East Coast, the cities are somewhat big but a little smaller. The hotels are a little bit nicer, the food is a little bit better, the facilities are bigger and more spacious. But, it’s like I said the only thing that matters most is the on-the-field product. Someone once described the metaphor to me as their both are two different cakes, the cakes itself are the exact same. But the icing on the big-league cake is so much more. That’s a great way to depict it because the core of both of them are the same thing but all the fluff around it is significantly more up there.

Question: Can you name a highlight of your career whether it was in the big leagues or the minors?

Answer: That’s a tough question, I wouldn’t put it on any individually moment or individually accomplishment. Like I said the first time getting called up and sharing that experience with the people closest to me was something I’ll never forget. I think that the overall lessons that I’ve taking from this game not about baseball but about life, and just trusting in a plan that’s bigger than my own. Prioritizing the important things in life and not making baseball an idol in my life has been probably been the highlights. I know that sounds a little off the wall of an answer but the impact that the game has had on my life is definitely the most important thing.

Question: Correct me if I’m wrong, but you got the opening day win for the Orioles. How was that?

Answer: I did. That was pretty cool it was extra innings against the Blue Jays. I’ve started every appearance of my minor league career and then I made the team out of the bullpen for the last two years. To come in and get the opening day win was just awesome. It was in walk-off fashion, [Mark] Trumbo hit a walk-off homer against our division rivals, who we had just lost the wild-card game to last year. There was a lot of different variables that made that a really special moment and to be able to have my family there made it that much more special. That’s something that I’ll remember for a long time.

Question: What are some of your goals during the season?

Answer: Stay healthy is number one. Once again there are a few things that are out of your control but do the things you can to stay healthy. Prioritize my routine and trust in the process. My goals are a day at a time and I want to get as good as I can, improve things in my game that needs to be done to be ready not only physical but mentally when that bell does ring. Because there’s going to be a time I will need to be prepared to pitch a big game at the last second or somebody goes down and I will need to show up and be the guy. I trust that the work I put in will show when that day happens.

Question: What advice would you give young minor league players?

Answer: Number one, not lose yourself in the game. This game is beautiful and it doesn’t need any one of us no one is bigger than the game. Remain true to who you are, but be afraid to be different be bold in the things that make you who you are not only as a baseball player but as a person.  Two, don’t let the game become an idol enjoy it and treat it like the game that it is and three, just trust in the process, control what you can control, stay rooted in the things that are right in front of you and don’t let everything else that’s going on around you take you outside of who you are.