NORFOLK, Va. — In his 39th season in professional baseball, Norfolk Tides Manager Ron Johnson still enjoys being at the ballpark. But this season his job has an added benefit – spending more time with his son, Chris, who joined the team in February, and grandson.

Ron begins his work day playing with 19-month-old Grayson for an hour and a half while Chris works out. It is Ron’s favorite part of the day.

“I like to sit in my locker because [Grayson] likes to take all of my shoes out of my locker,” Ron said. “I hide behind the clothes in the back and I go, ‘Hi! This is Mickey!’ because he thinks Mickey Mouse is in my locker.”

Chris, 32, spent eight seasons playing with five major league teams, including the Atlanta Braves and Miami Marlins. The Baltimore Orioles signed him as a free agent in February, released him and re-signed him to a minor league contract with the Tides in March. His wife, Tia, and Grayson moved to Norfolk with him.

When Ron and Chris head to batting practice, Tia stays with Grayson in the players’ family waiting room outside of the Tides’ clubhouse. During games, she usually watches four or five innings before taking Grayson home. 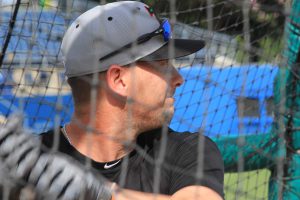 Being together during Tides’ home stands in Norfolk gives the Johnsons more family time during baseball season than ever before in the family’s history.

Ron, in his sixth season as the Tides’ manager, has been a minor league manager for 24 years. He played professionally for 13 seasons before that, including 22 games over three seasons in the majors. So he was on the road often while Chris and his four siblings were growing up. He didn’t see many of Chris’ baseball games.

Now he sees Chris all the time – and it has helped Chris’ game.

“Usually we just [talked] about hitting over the phone and stuff like that,” Chris said. “Now it’s every day, and he can see my swing. I think it works out really well.”

In the third game of the season, Chris broke his right arm when hit by a pitch. He missed two and a half months. During that time, the father and son studied videotapes daily, looking at Chris’ swings. They developed an approach for him to take when he returned. 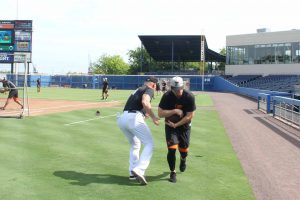 With Chris back from the DL, Ron tries not to let his concern for his son’s success on the field interfere with the coaching staff’s duties to instruct players. But he enjoyed the extra time together to work on Chris’ game during his rehab time.

“I could be a dad and he could be a son,” Ron said. “I hate to see him get hurt, obviously, and miss the time. But with him here it’s really more about family than it really is about baseball.”