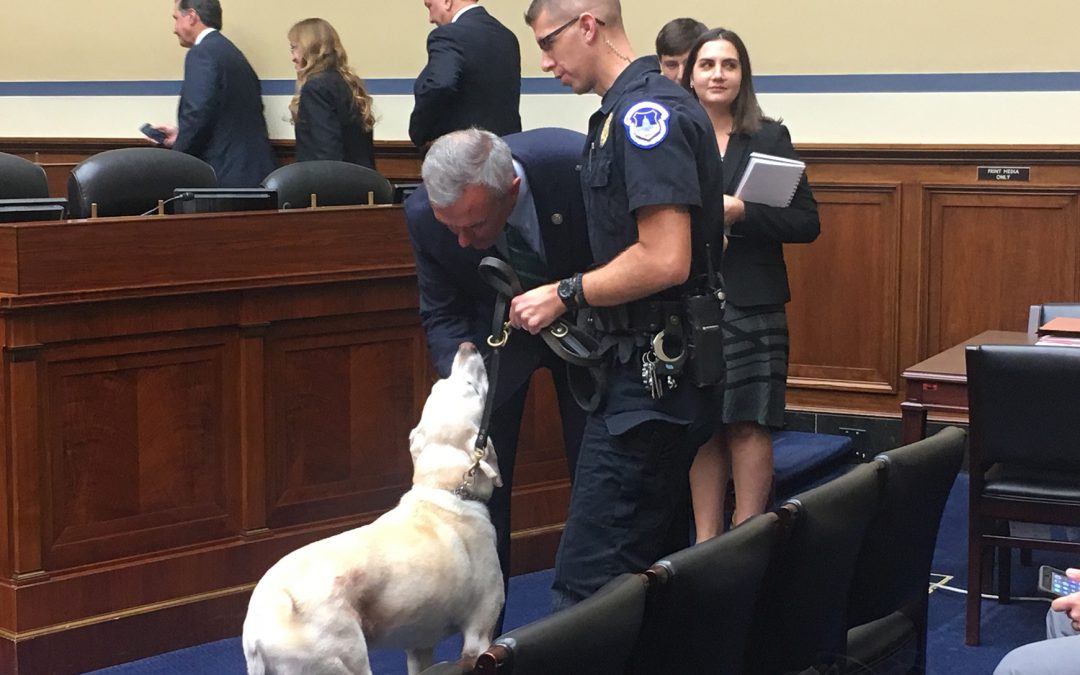 WASHINGTON — A yellow Labrador retriever named Jax stole the spotlight Tuesday at a congressional hearing that focused on the high number of dogs in homeland security canine units that are from foreign countries.

He was trotted out as an example of the trained dogs in canine units, which help law enforcement by sniffing out explosives and narcotics. Jax received a warm reception from all of the congressmen, who also seemed united in their belief that these units are, as Rep. Gary Palmer, R-Al., said, “integral to national security framework.”

However, as many as 90 percent of the dogs purchased by the American government are from foreign breeders, according to American Kennel Club lobbyist Sheila Goffe.

At the hearing of the committees on Oversight and Government Reform and Homeland Security, Goffe and other witnesses argued that the high percentage of foreign-bred dogs should be a cause for concern.

“Challenges faced when relying on importation of dogs from foreign sources stem from a lack of control over factors that could impact the success and stability of these dogs,” University of Pennsylvania researcher Cynthia M. Otto told the committees, citing concerns like disease, inbreeding and a lack of exposure to a wide variety of environments.

Breeders give up dogs at around 12 weeks of age, but the U.S. government often doesn’t obtain these dogs for security training until they are at least 12 months old. When it comes to foreign-bred dogs, therefore, security agencies have little knowledge of the environment these animals experienced during a critical stage in development. At the University of Pennsylvania Vet Working Dog Center, dogs are trained beginning at 8 weeks old, Otto said. As a result, she said, trainers are “able to mitigate a lot of the problems that keep dogs from being successful, like environmental sensitivity.”

Goffe said small U.S. breeders usually can’t produce the quantity of dogs necessary for large-scale government demand, resulting in the foreign purchases. She also said a lack of financial incentives was to blame for the low number of American breeders. “A breeder can sell them at 12 weeks for a price the government would pay at 12 months,” she told the committees.

Rep. John Katko, R-N.Y., said he agreed that more should be done to procure a majority security dogs from within the United States: “I think it would be great if we can get to the point where we stop importing dogs from Belgium or wherever else,” he said.