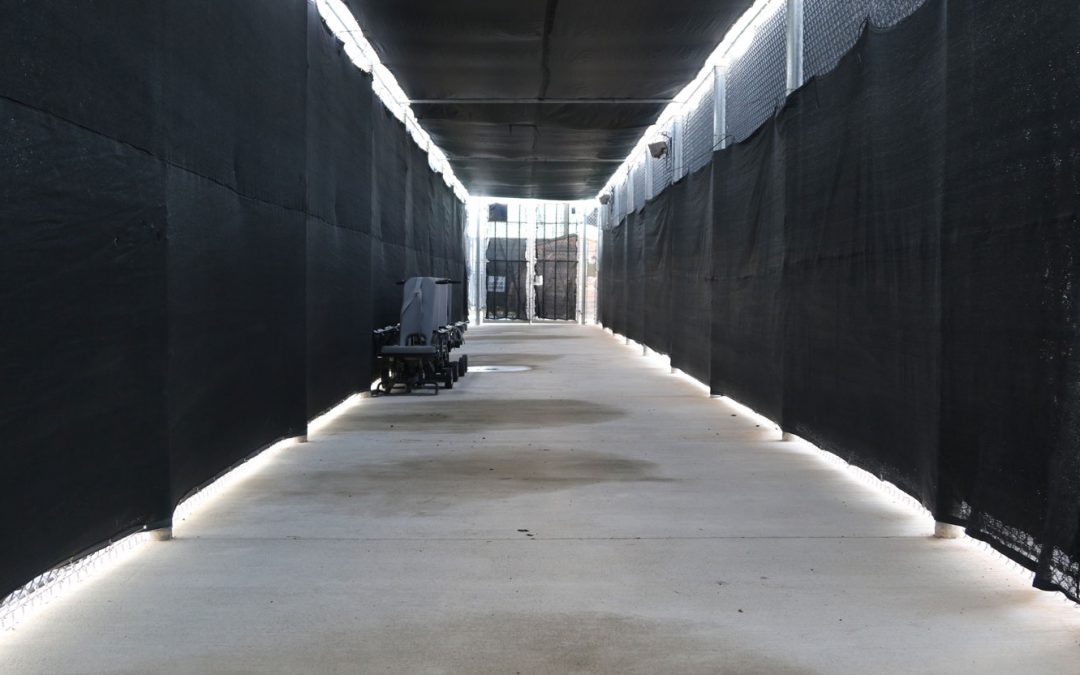 The hall between the holding cells and the detainees’ entrance to the courtroom at Guantanamo Bay. (Courtesy of Department of Defense.)

GUANTANAMO BAY — The 26th round of pre-trial hearings for Khalid Sheik Mohammed, the accused orchestrator of the Sept 11th attack, and four other accused conspirators will begin Monday at U.S. Naval Station Guantanamo Bay.

Attorneys for Ammar al Baluchi, referred to as Ali Abdul Aziz Ali in court documents, and Mustafa Ahmad al Hawsawi said the primary focus of this week’s hearing is supposed to be whether the Military Commission Court has jurisdiction over the men. They argue will argue that the U.S. wasn’t legally at war with al-Qaida so the men can’t be tried by a military court.

But before that argument can be made, the court will consider what James Connell, defense attorney for al Baluchi, refers to as the “mystery motion” filed against the other three defendants.

Walter Ruiz, defense attorney for al Hawsawi, speculated that the motion addresses “a referral having to do with security clearance issues.” He said if so, it would be “inappropriate” and could lead to the severing of al Hawsawi’s case from the other four defendants.

“You can’t have it both ways,” Ruiz said. “Either you’re going to have a joint prosecution, where you try these defendants jointly and you provide information….to all of the accused, or you don’t.”

The “mystery motion” will be followed by arguments regarding the return of laptops that were seized from the five defendants in October. The laptops were seized following suspicion that some defendants were talking about how to tamper with the laptop, and according to Ruiz, the discovery of physical contraband.

The laptops were provided to help facilitate preparations for the trials, such as a digital storing of legal documents, and without them Ruiz said he is prepared to put a motion in for abatement, which could cause the pre-trial proceedings to cease.

“They have absolutely no evidence whatsoever… that (al Hawsawi) has, in any way, shape or form, tampered with his computer,” Ruiz said, also saying that he knows the commission has evidence of tampering against other defendants.

The prosecution is requesting a forensic investigation, according to Ruiz.

If that is settled Army Col. James Pohl, chief of the military commission judiciary, will hear al Hawsawi’s and al Baluchi’s cases separately, and this week’s hearing is likely to focus on al Hawsawi with al Baluchi’s arguments most likely postponed to next year, Connell said.

The questions, Connell said, are dependent on the commission’s determination of when the United States was considered to be in hostilities with al-Qaida.

Ruiz said that the judge may not rule on the motion for another year.

“The burden is on the prosecution to establish that we were in fact in a state of hostilities, or war for lack of a better term,” he said. “We think that it’s going to be pretty difficult for them to do.”

Ruiz argued that a hostility that would be governed by the laws of war would not include “sporadic” attacks that happened over a long period of time, but prolonged engagements by a large number of military forces.

Four witnesses called by the prosecution are scheduled to testify about when hostilities – defined by the 2009 Military Commissions Act as “any conflict subject to the laws of war” – between the U.S. and al Qaida began.

Al Hawsawi and al Baluchi are the only defendants who are part of the motion.

All five defendants in the 9/11 case were arraigned in 2009 and pre-trial proceedings began in 2012. Connell said that al Baluchi’s defense team is planning for the trial to begin in 2020 at the earliest.