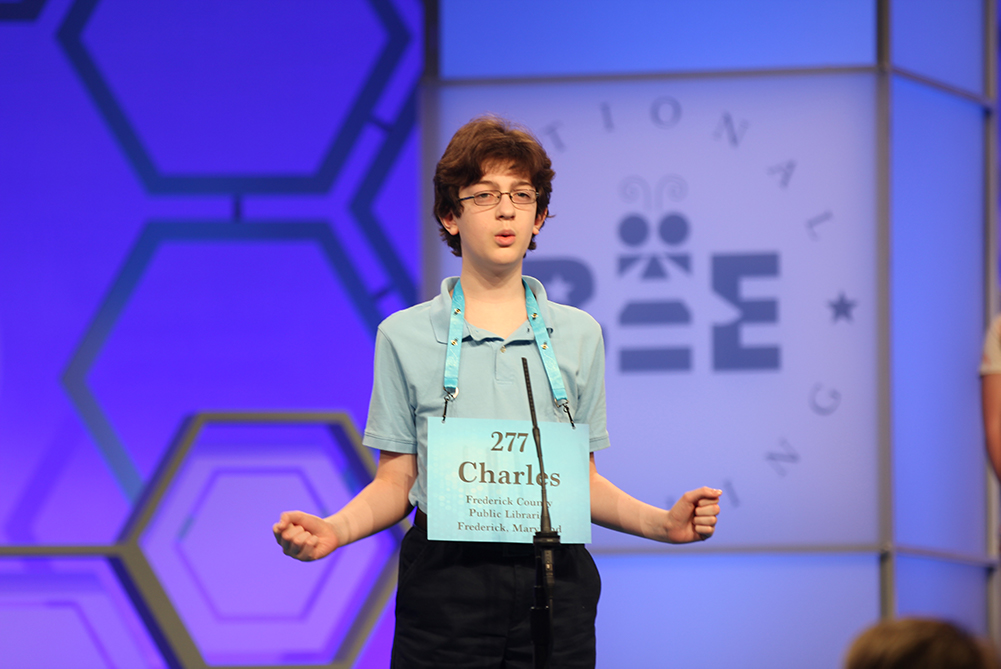 NATIONAL HARBOR, Md. — Frederick’s Charles Millard still considers himself a winner despite misspelling “germon,” the French word for a type of tuna, in the first round of Tuesday’s National Scripps Spelling Bee.

“In my mind I’ve already won,” he said before taking the stage. “At this point, it doesn’t really matter where I get out.”

The Frederick Classical Charter School seventh-grader has won his school’s bee for the past three years. He also finished as first runner-up in last year’s Frederick County bee. Not only does the 13-year-old have a knack for language, he’s also a natural on camera.

He stars as BeeTV’s own “Ron Burgunbee,” a news anchor for the national bee’s YouTube channel. As the anchor, Charles dons a fake mustache and takes audiences for an inside, satirical look at this year’s competition. He can even be credited for the online show’s inclusion of water-skiing squirrel footage, he said.

But making it to the national stage wasn’t all fun and games for Charles. To prepare, he studied every day after school with an online study guide.

Frequent reading was his second essential study tool. Charles is an avid reader, according to his mother, Laura Millard: “I think by about [age] 5 he could outspell me. I’d be reading, and he would be correcting my pronunciation.”

He reads about one new book every two days: “I read a lot of books in general and I feel like that kind of helps me learn words. … It would be difficult to find a book I wouldn’t like.”

He not only reads frequently, but also reads advanced material for a middle schooler. He recently completed Charles Dickens’ “A Tale of Two Cities,” which he acknowledged was “difficult in some places, but not as difficult as Shakespeare.”

Despite the challenging language of Shakespearean plays, he prefers Shakespeare to Dickens. “I think Shakespeare is funnier,” he said.

In addition to his penchant for reading and ability to recite lines from “Julius Caesar” at the drop of a hat, he also enjoys history, math and science.

He said that he likes science because it can be “applied to the real world instead of just being a bunch of numbers and memorized facts.” To demonstrate the real-life application of a scientific force, for example, he enthusiastically stood up and ran against a wall.

Now that the bee is over for him, Charles plans to take a breather this summer and read in his spare time. He’s not sure if he wants to compete again next year, but he said it’s been a fun experience and he’s grateful that the Frederick County Public Libraries sponsored his trip.

This year’s bee, with a record-breaking 516 participants, will continue to air its preliminary and final rounds on ESPN this Wednesday and Thursday. Spelling aficionados can participate by watching the “play-along version” on ESPNU.