Protesters demanding justice for Palestinians rally outside of Kushner’s house 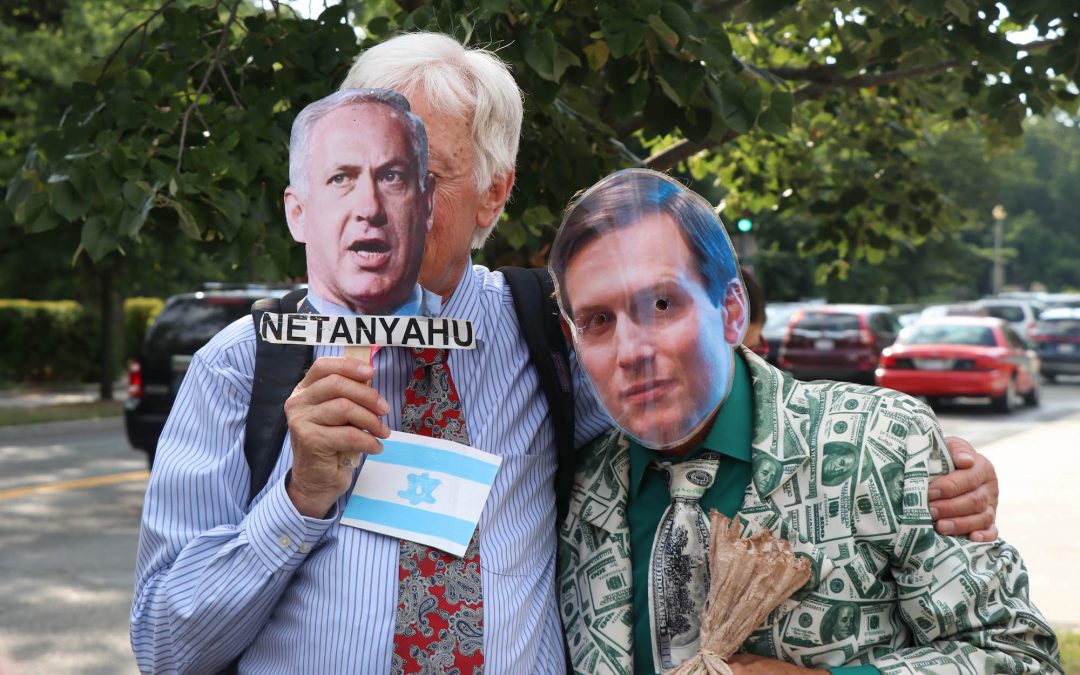 Tighe Barry, an activist with the CODEPINK, disguised as Jared Kushner in the rally. (Shaw/Medill)

WASHINGTON — Protesters rallied outside the house of White House adviser Jared Kushner on Thursday to demand Palestinians’ right to return to their homes as part of any peace agreement between Israel and Palestine.

“We are here to protest Jared Kushner’s oncoming peace plans that won’t include justice,” said Ariel Gold, national co-director of CODEPINK and organizer of the rally. “There can be no peace without the Palestinian right to return to the homes and lands they have been displaced from since 1948.”

President Donald Trump and his advisers, led by Kushner, have been working on a Middle East peace plan since last year.

The nearly three dozen protesters gathered at the Islamic Center of Washington, then marched the one black to Kushner’s house in the wealthy neighborhood of Kalorama. And they chose this place for a reason.

“We’re here outside Kushner’s home or to reach him and also, as he sits comfortably in his home, Palestinians continue to be displaced from their homes and land,” said Gold.

Most have a photo hanging from their neck of one of the 146 people who died in Palestinian protests from March 30 to May 15, which marked the 70-year anniversary of the Nakba, the 1948 Palestinian war and the relocation of U.S. embassy from Tel Aviv to Jerusalem on May 14. They tied the photos to Kushner’s fence at the end of the rally.

Amal Jalada, who lost a young relative in the protests, cried during the rally when she saw his picture. “I feel very sad,” she said, “everybody in the family was sad for him because he was a very sweetheart guy.”
Jalada’s grandparents and parents were forced to leave Jaffa because of the Nakba, she said.

“We want to return to our homes because we have memories, we have properties and we have the right,” she said.
Nadia Itraish, a Washingtonian originally born in Jerusalem Palestine, believed she “was born with a cause and that cause is to bring freedom to Palestine and the Palestinians.”

Being a Palestinian America, Itraish thought the story of the Palestinian people is very similar to that of Native American Indians in the U.S. “However, we want to ensure that the Palestinians’ story ends in a happy one.”

Itraish came to the rally with a message — “We are determined to have what is our right, returning to our homeland in Palestine. And we want to do so in peace.”

Protesters held banners to prepare for the march from Islamic Center of Washington to Jared Kushner’s house. (Shaw/Medill)

Tighe Barry, an activist with the CODEPINK, disguised as Jared Kushner in the rally. (Shaw/Medill)

Protesters stood in front of Kushner’s fence where they tied photos of people died in Gaza protests to mourn the loss. (Shaw/Medill)

Amal Jalada, whose parents and grandparents fled their home because of the Nakba, lost a relative in Gaza protests. (Shaw/Medill)