Kastles bringing in big stars who care about the community

WASHINGTON – When the Washington Kastles played their home opener Monday for their 11th World Team Tennis season, the lineup featured rising star Frances Tiafoe and 2013 doubles world No. 3 ranked player Robert Lindstedt — and they are only part of this year’s luxury roster the team has got this year.

Since its debut in 2008, the Kastles are among the best of the WTT teams in getting and keeping top players. Owner Mark Ein and Coach Murphy Jensen say their success is based on a strategy of creating a team culture that features high-level competitors but also is strongly grounded in players helping the community. The community engagement is especially appealing to many players., and keeps them coming back.

The strategy’s payoff? “I would say over 100 grand slam titles have played for the Washington Kastles. They went on to perform for this team who won five championships in seven years,” he said.

“There is something to be said about the continuity and players who know each other and know the team and know the format.” Ein said.

Paes, who has won 18 grand slam titles in his career, played for the Washington team for eight years, the longest of anyone in the franchise.

Ein was proud that world No. 18 Osaka told him that if she ever played in the WTT games, she wanted to play for the Kastles. The 20-year-old will make her WTT debut on July 28 in a home game against the Philadelphia Freedoms before playing the Citi Open.

“We want people who understand the culture of our franchise, which is very community-based, and we want people who come here knowing that being a part of the Kastles means that you are expected to give back to the community and represent us well,” said Ein.

Since the launch of the team, the Kastles Kids Clinics have been around to engage less-privileged local kids in physical activities. The Williams sisters, two of the best female players of all time, would participate every time they were on the roster.

“For tennis players who are by themselves the whole year, that’s a really nice change and they were really embracing it,” said Ein. 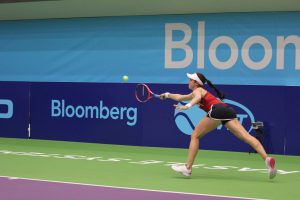 Christina McHale was brought in to Monday’s game against the New York Empire. (Athena Liu/MNS)

WTT matches, which experiment with new rules and a relaxed playing environment, are separate from professional tournaments where players earn points, titles and higher rankings. Multiple ATP and WTA tournaments, such as the San Jose International, the German Tennis Championship, the Citi Open and even the finals of Wimbledon, are held during the WTT season, which this year runs from July 15 to Aug. 5. That requires a lot of negotiations between teams and players.

“Tennis players wear a piece of the tennis calendar and we have to make sure we fit into what they are doing the rest of the year,” said Ein.

This year, with the Kastles’ Nichole Melichar advancing to the Wimbledon mix doubles final and Venus Williams and Naomi Osaka scheduled to play later in the WTT season, the team had to bring in Christina McHale as a substitute to compete in the first few matches.

Tiafoe, who grew up in the Washington suburb of Hyattsville, Maryland, would often come to the Kastles games and line up for autographs afterwards. Inspired by world-class players, he later moved to Florida to train at the USTA National Training Center. In 2017, he came back to Washington to play for the Kastles. This year he won his first ATP title at the Delray Beach Open in February and reached his career-high ranking of No. 45 on July 16. 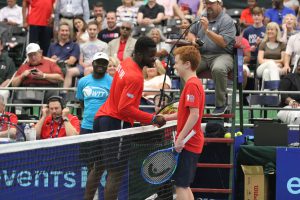 Frances Tiafoe goes on to give back to the community with the Kastles. (Athena Liu/MNS)

While big stars bring people to the stadium and the sport, Jensen believed they are also inspired by their teammates’ commitment to the matches and to the local community. He also said that part of the Kastles’ success is the loyalty of the fans, won through the community engagement as well as having great players.

“At the end of the day, every person (watching Monday’s home opener matches) had a choice in what they did tonight. The All-Star game is going on, but they are at the Kastles stadium. It’s Monday night in summer, they could be swimming in the river, but they are at the Kastles stadium. I think they are here because, for 11 years, we have played for something outside selfish stuff. We’ve played for the city, to make an impact,” he said.