At its 50th edition, Citi Open keeps changing to serve the unchanged philosophy

Citi Open has been one of the most long-lasting tournaments in the United States. (Athena Liu/MNS)

WASHINGTON – When the Citi Open debuted in July 1969, players competed on a clay court at Rock Creek Park with white balls and wood rackets. Famed tennis player Arthur Ashe was playing, but the stands could only hold 20 people. Players had to find their own locker rooms, changing rooms and cafeteria in the neighborhood.

But the tournament refused to be defined by the harsh beginning.

As the only tournament in the nation owned by a nonprofit organization – The Washington Tennis and Education Foundation – all the changes in the last 50 years serve the unchanged mission – running an innovative and inclusive tennis tournament and inspiring the underserved people in Washington, said CEO Rebecca Crouch-Pelham. 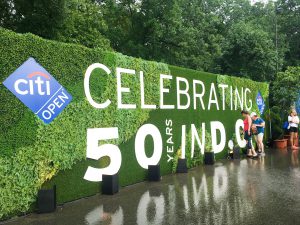 The Citi Open is celebrating the 50th edition with players and fans. (Athena Liu/MNS)

“Every decision we made, every step we take is very mission and ambition aligned,” said Crouch-Pelham.

The Citi Open hired the same court construction team as the U.S. Open in 1986 to change its courts from clay to hard surface. According to Donald Dell, co-founder of the tournament, the Citi Open was determined to take the “ground-breaking” step.

“We tried very hard to get the same environment, the same standards of the court service as the U.S. Open, which is very important,” he recalled.

The court renovation continued in 1989 as the tournament managed to raise $20 million from private sponsors and built the William H.G. FitzGerald Tennis Center, the formal venue named after the benefactor who donated the first $1 million. 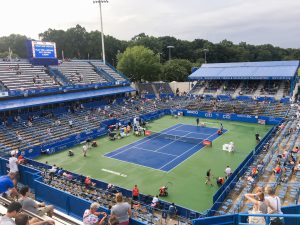 Since then, players including Jimmy Connors, Ivan Lendl, Andre Agassi and Andy Roddick have not had to worry about their off-court activities as 16 practice courts, a gymnasium, cafeteria and locker rooms were built.

“We have always wanted to keep (the Citi Open) as a first-class event and we want to keep good players and good playing conditions on the court,” said Dell.

By the end of the 2000s, the Citi Open was one of the most long-lasting and prosperous men’s tournaments in the U.S.

In 2012, the women’s Citi Open, previously held in College Park, Maryland, was merged with the men’s tournament to became a joint event in Washington.

“Adding the women’s is another testament to the mission of the tournament, which is to create a very inclusive environment,” said Crouch-Pelham. “The changes over time have always been in favor of the inclusiveness, and making sure that everyone has access and no one feels excluded by the event.”

Now, the Citi Open has become the only combined men’s and women’s tournament at the 500 series level in the country.

On its 50th anniversary, the Citi Open this year announced another innovation together with the ATP, WTA and USTA – a 25-second serve clock for every match, given the successful attempt at the U.S. Open qualifying last year. 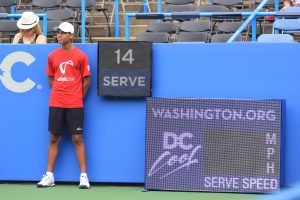 A 25-second serve clock was implemented on every game court this year at the Citi Open. (Athena Liu/MNS)

While few players were called for violations at the U.S. Open, Sloane Stephens believes it will be hard for players to pay attention to the serving time, especially towards the end of the match.

Frances Tiafoe doubted the effectiveness of the timer.

“It’s definitely cool,” he said at a press conference, “but I don’t think it’s going to help matches go quicker. A match that goes long is still going to be long.”

Dell, however, is confident that the innovation will create a more equal playing situation.

“It’s good for the game because it forces everybody to have the same time… Now it’s 25 seconds for everybody. It’s out there public, so everybody can see it,” said Dell.

The innovations will never stop at the Citi Open. Next year, six more practice courts are going to be built, while the men’s locker rooms will be enlarged significantly.

The achievements of these innovations are well recognized by the community.

“The City Open has captivated the attention of the global tennis community. It has put the Ward 4 and the District of Columbia on the map for world class tennis, and it has brought a lot of people from all over the world, the region and the city to the Rock Creek Park Tennis Center,” said Joshua Fleitman, spokesman for Councilman Brandon Todd. 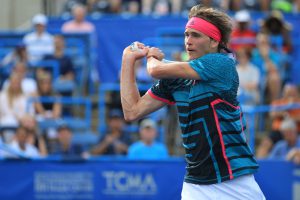 “They’ve been really effective at broadening the horizons of young people, opening up the sport and exposing people to coaches, role models, people they can look up to, good athletics as well as sportsmanship.”