Two dozen white nationalists rally for Unite the Right, while more than 1,000 protested against them 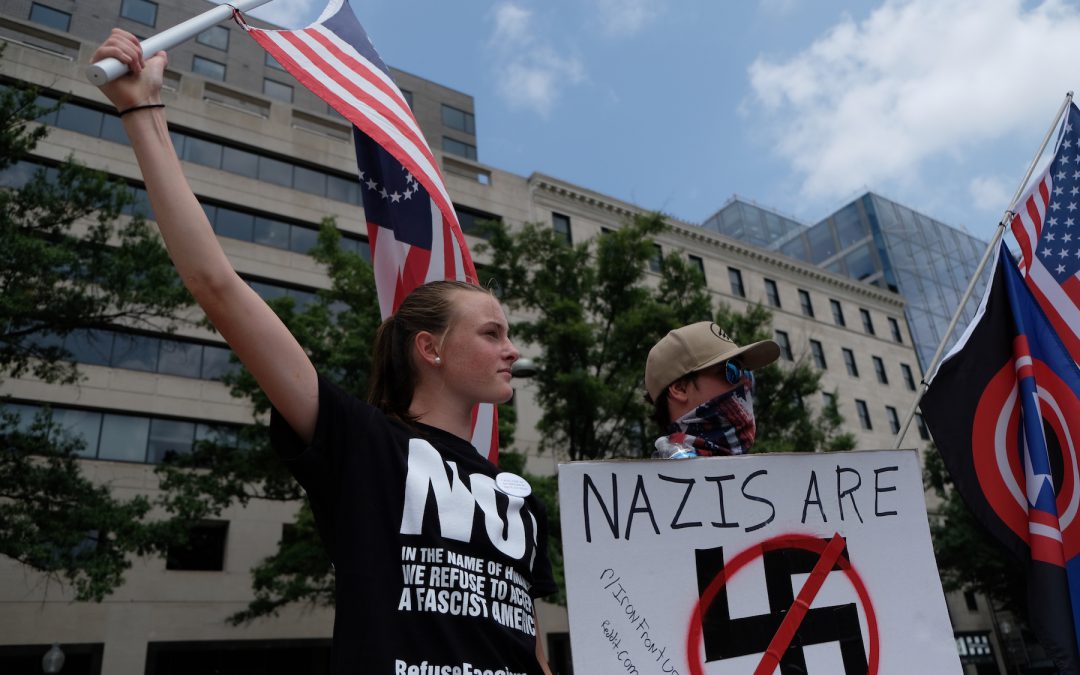 Siblings Charlotte and Sean Kratovil-Lavelle stand on the perimeter of the Unite the Right counterprotest on Sunday. (Holly Honderich/Medill News Service) 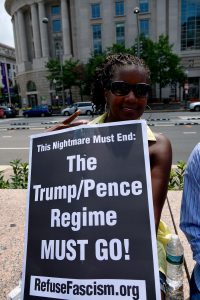 Karen Gillian, 53, travelled from Maryland to the counter protests “to let the racists know they’re not going to overtake us.” (Holly Honderich/Medill News Service)

WASHINGTON – About 1,000 protesters gathered a few blocks from a white nationalist rally Sunday, far outnumbering the fewer than two dozen Unite the Right activists who walked to Lafayette Park near the White House one year after the deadly riots in Charlottesville, Virginia.

“We’re here to fight racism, and to let the racists know that they’re not going to overtake us,” said Karen Gillian, 53, who traveled from Maryland for the protests.

“It’s such an eclectic group of people,” she added. “It’s not just black people, it’s not just young people. It makes me very hopeful.”

Unite the Right had announced that 300 members would rally in front of the White House to protest perceived “civil rights abuses in Charlottesville.”

While that group was much smaller than expected, the fact of their presence energized the counterprotesters to gather from around the region to denounce the racism and fascism known to animate the alt-right movement.

Those assembled varied in age, geography and race. Many carried signs, some bearing somber messages decrying the Trump administration and its policies, others taking a decidedly lighter tone. One man hoisted a large poster reading, “Make Tiki Torches Non Political Again” – a reference to the tiki torches carried by several white nationalists in Charlottesville last year.

A number of counter-protesters said they showed up in Washington to make clear that messages of white supremacy should have been silenced long ago.

“It feels absurd, I can’t believe we have to do this,” said Rena Finkel, 26, from New York, New York.

McGraw said it was her first time participating in such a protest.

“I figured it was time,” she said.

The counterprotesters emphasized, repeatedly, the need to be a visible counterbalance to the hatred and fear incited by alt-right activists. 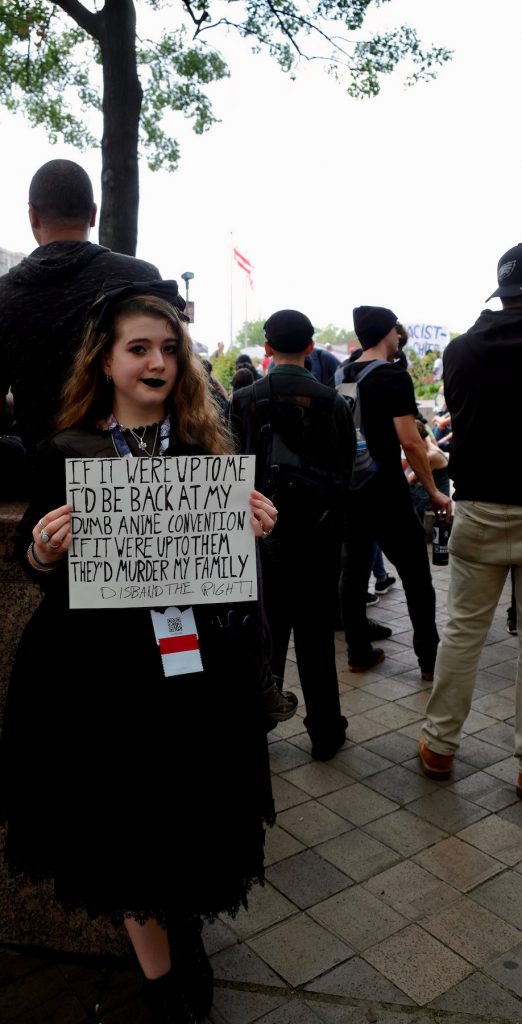 Rena Finkel, 26, felt compelled to trade in her day at DC’s anime convention, to protest the messages of hatred and racism incited by Unite the Right. (Holly Honderich/Medill News Service)

“If we weren’t here, all the cameras would be on them,” said Sean Kratovil-Lavelle, 17, from Kent Island, Maryland.

Kratovil-Lavelle said United the Right activists have become emboldened since the election of President Donald Trump so their opponents need to become more vocal.

The Answer Coalition, an antiracism group that helped lead the counterprotests, received approval from the National Park Service for a total of 1,500 participants gathered throughout D.C. on August 12. The permit issued to Jason Kessler – the now infamous white-nationalist activist who organized last year’s rally in Charlottesville – estimated 400 participants.

Finkel, had planned to be in D.C. Sunday for an anime conference. But when she heard of the alt-right gathering, she traded in her plans to meet up with other afficionados of Japanese pop culture, art and fashion, taking her goth costume to Freedom Square instead.

She noted that as a Jewish woman she was particularly compelled to speak out.

Published in partnership with