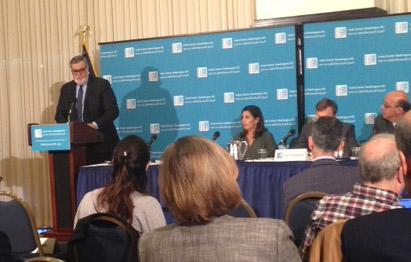 WASHINGTON – Saudi Arabia, accused of murdering journalist Jamal Khashoggi in the Saudi consulate in Turkey earlier this month, has led efforts to “snuff out” freedom of expression since the 2010 Arab Spring protests against government oppression in a number of Middle Eastern countries, a human rights expert said Tuesday.

Speaking at a panel discussion on the political implications of the Khashoggi killing, Tom Porteous of Human Rights Watch and other human rights experts said that Khashoggi’s murder, allegedly at the behest of the Saudi government, was business as usual for a country with a history of human rights abuses.

She and others also criticized the U.S. as complicit in Saudi Arabia’s human rights abuses, alleging that the U.S. policy grants Salman’s government a fre -pass to commit these horrific acts.

“We have allowed a level of impunity to Saudi Arabia that we have not for any other ally,” Fassihian said.

Washington Post columnist Jamal Khoshoggi was last seen entering the Saudi Arabian consulate in Turkey on October 2, where the Turkish government alleges he was murdered and dismembered. The Saudi government initially denied the allegations, but now says the murder was an accident.

Andrew Miller, deputy policy director at the Project on Middle East Democracy, criticized the Trump administration for its “wildly inconsistent” response and apparent lack of desire to hold Salman accountable for Khashoggi’s death.

Miller contended that the U.S.- Saudi relationship should include a tougher stance on human rights.

“Signals from Washington have been, more or less, you can do whatever you please,” he said.

Fassihian noted that Saudi Arabia’s lack of press freedom and clamp downs on free speech may not bode well for sustaining its monarchy.

“Today, Saudi Arabia is one of the most restrictive media environments in the world, Fassihian said. “But history has shown that top-down mandates from despots don’t work.”

Turkey’s president Recep Tayyip Erdogan said in a speech Tuesday morning that Saudi Arabia is responsible for pre-mediated murder and asked that the perpetrators be extradited for trial in Turkey.

The Director General of UNESCO on Tuesday asked for justice for Audrey Azoulay, a reporter who was murdered in Pakistan in October.