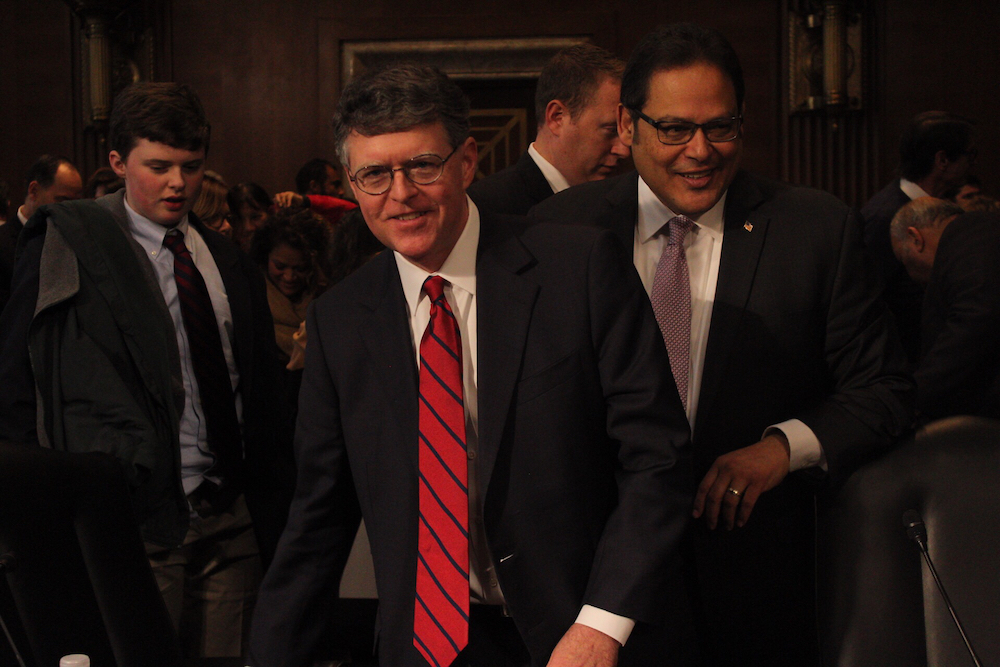 The Senate Energy and Natural Resources Committee considered the nomination of Mr. Bernard L. McNamee to be a Member of the Federal Energy Regulatory Commission. (Photo: Patty Nieberg)

WASHINGTON – A nominee for the Federal Energy Regulatory Commission on Thursday sidestepped Senate Democrats’ request to recuse himself from voting on energy pricing policies he helped draft as a senior Energy Department official.

Democrats on the Senate Energy and National Resources Committee were concerned of his support for the Trump administration’s policies to provide subsidies for coal and nuclear plants. In January, the FERC rejected the Grid Resiliency Pricing Proposal that McNamee co-wrote. Critics said the pricing plan would have favored the nuclear power and coal industries.

McNamee responded that the FERC’s role is not to pick and choose, saying the “market decides what’s the right resource.” Smith reminded the committee that tax incentives play a role to “favor certain fuels.”

Sens. Ron Wyden of Oregon, Catherine Cortez Masto of Nevada and Angus King of Maine asked McNamee repeatedly to recuse himself from matters relating to the Grid Resiliency Pricing Proposal. In response, McNamee said he would talk about it with FERC’s ethics lawyer.

King said he was “surprised and disappointed” that McNamee would ask for advice on “something so clear.”

Early on in the meeting, a protester was arrested for publicly addressing Chairman Sen. Lisa Murkowski, R-Alaska, calling McNamee a “cheerleader for the fossil fuel industry.”

“Vote no on McNamee,” he said as police escorted him out of the room.

McNamee told the committee that he would strive to be an “independent arbiter” and “look at the law and past to make those decisions.”

The committee also considered the nominations of Rita Baranwal to be assistant secretary for nuclear energy at the Energy Department and Raymond David Vela to be National Park Service director.

If confirmed, Vela would be the first Latino to head the National Park Service Director in its 102-year history.

One of Vela’s priorities would be “starting at the top” to implement more transparency and accountability. There have been repeated instances of sexual and workplace harassment in the National Park Service. He believes “there’s more to be done.”

Wyden demanded specific changes Vela would make before he would vote to recommend his confirmation.

With 20 years in the industry, Baranwal said one of her priorities would be to make the next generation of nuclear energy more financially feasible.

Baranwal also said that the voices of communities are important to consider but final decisions rest with federal officials.

Committee members left with mixed feelings about McNamee but most seemed to support Baranwal and Vela. The next step is for the committee to vote on whether to recommend each candidate for a confirmation vote by the full Senate. No date has been set.