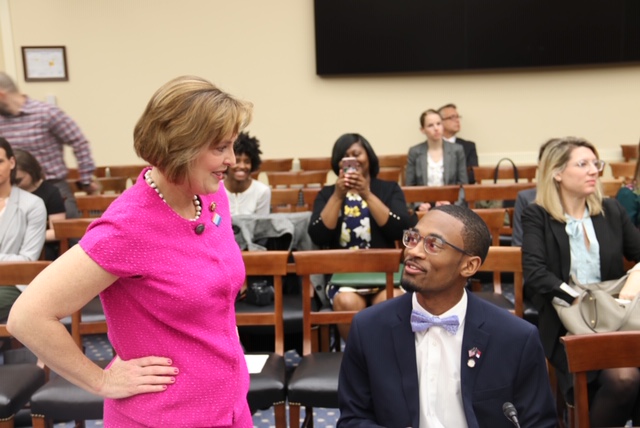 WASHINGTON — Several young climate activists on Thursday chastised all three branches of the federal government for not acting aggressively to address the growing threat of global warming. 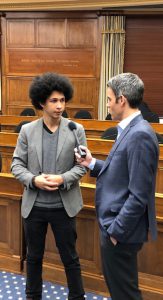 Aji Piper, one of 21 young plaintiffs in the constitutional climate lawsuit Juliana v. United States, being interviewed after his testimony.
Photo Dwight A. Weingarten/Medill News Service

At the first hearing of the House Select Committee on the Climate Crisis, Aji Piper, an 18 year-old from Seattle, Washington who has sued the federal government for not reducing carbon, said, “I place my faith in the court.”

He is one of 21 plaintiffs in a lawsuit that claims young people will lose their constitutional right to life if the government does not take action to protect the environment.

“I am here to speak to you, as a young person, on the greatest issue of our time—climate change,” he told the committee.

“It is now our obligation, our moral responsibility to take action,” said Castor, “From this point forward we will be focused on solutions.”

Rep. Sean Casten, D-Ill., said Congress has had “a bipartisan consensus to do nothing” for decades.

Casten said as the former owner of a clean energy company he thought global warming was occurring because technology wasn’t advancing rapidly enough, but now, as a member of Congress, believes “the laws of the U.S. are holding us back.”

“What you have done is leadership distilled,” Casten told the young activists, “and what we’ve done so far is shameful.”

Florida Rep. Matt Gaetz, a Republican called Wednesday for a reduction in global carbon emissions at press conference, taking a different approach than the Green New Deal supported by many Democrats. His plan is based on the premise that U.S. industries already have reduced greenhouse gas emissions and the government should support further technological advances in clean energy by reducing regulation on those industries and investing in new technologies.

Piper called the hearing a “first step” in the crusade for congressional action on climate change; Casten urged the young activists to continue to push Congress and the rest of the federal government.

Paraphrasing Robert Frost, Casten told his colleagues of both parties, “We have promises to keep and miles to go before we sleep.”

The Phoenix is part of The Newsroom network