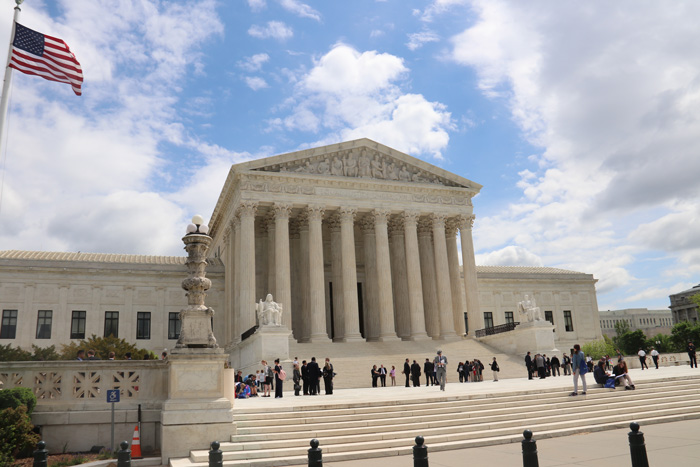 The Supreme Court heard the case Department of Commerce v. New York Tuesday. The ruling on the case is expected to be decided before the census is printed in June (Dwight A. Weingarten/Medill).

WASHINGTON – The questions of whether Commerce Secretary Wilbur Ross exceeded his authority and violated the Constitution in ordering that the 2020 census require people to disclose whether they are a citizen came before the Supreme Court Tuesday.

In a controversial case on whether to include a question of citizenship on the 2020 census, the lawyer representing the executive branch raised two questions:

Solicitor General Noel Francisco argued that Ross did not violate any law in adding the question. He also said the fears of an undercount or the data being used by other government agencies for illegal purposes were not legitimate injuries to establish standing in court.

In March 2018, Ross decided to reinstate the citizenship question on the 2020 census, a question that had not been asked of all households since 1950, although it has been included on the long-form census sent to a small percentage of households in 1960 and beyond.

Ross’ decision was challenged in federal court by New York state and others alleging it violated the census clause of the Constitution or “the actual Enumeration” as called for in Article I, Section 2. The Constitution, which requires the numbering of the people every 10 years, makes no reference to the term “citizen.”

In January, the Southern District of New York ruled that the citizenship question violated federal law and enjoined the use of the question. The Commerce Department then asked the Supreme Court to hear the case again.

Justice Sonia Sotomayor, whose questioning of Francisco opened and closed the hearing, said if a citizenship question is added, “There’s no doubt that people will respond less.”

The Census Bureau told the White House in documents publicly released in February that as many as 630,000 households may not complete the 2020 census because of the citizenship question.

Francisco argued that Ross’ choice to reinstate the question fell within the authority of his role as the department secretary who oversees the census.

On the question of whether Ross violated the law in altering the census without a legitimate reason to do so, Justice Elena Kagan said, “I searched the record and I don’t see any reason.”

Justice Brett Kavanaugh then asked Francisco to clarify the stated reason that including the citizenship question would improve the Justice Department’s enforcement of the Voting Rights Act.

Francisco said that the citizenship question would enable the Justice Department to complete a database on the Citizen Voting Age Population, but Sotomayor asked why the citizenship data could not be gathered from other administrative records.

“This is a solution in search of a problem,” she said, noting that communications indicate that Ross’ agency asked the Departments of Justice and Homeland Security for a reason to include the citizenship question.

New York and the other plaintiffs argued that asking whether a person is a citizen would cause a significant undercount because households that have members unlawfully in the country would not complete the form, causing underrepresentation in congressional apportionment and federal funding. 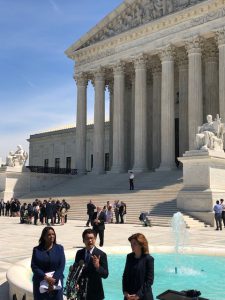 Dale Ho, an attorney for the American Civil Liberties Union, speaks outside the courtroom Tuesday. At left, Letitia James, the attorney general of New York and at right, Julie Menin, the director of the census for New York City, look on. (Dwight A. Weingarten/Medill)

“If you’re not counted, you’re not represented,” said Rep. Carolyn Maloney, D-N.Y., outside the courthouse. She worried that some communities in New York would not receive the “proper support” from the federal government due to undercounts.

Douglas Letter, the general counsel for the U. S. House of Representatives, emphasized the constitutional origins of the census and its importance to the legislative body in his remarks to the court.

“Anything that undermines the accuracy of the ‘actual enumeration’ is immediately a problem,” he said.

Outside the court, Betsy Plum, vice president of policy for the New York Immigration Coalition, one of the groups that brought the original suit, said the census should be nonpartisan.

“Everyone, as set forth in the Constitution, is meant to be counted,” she said.