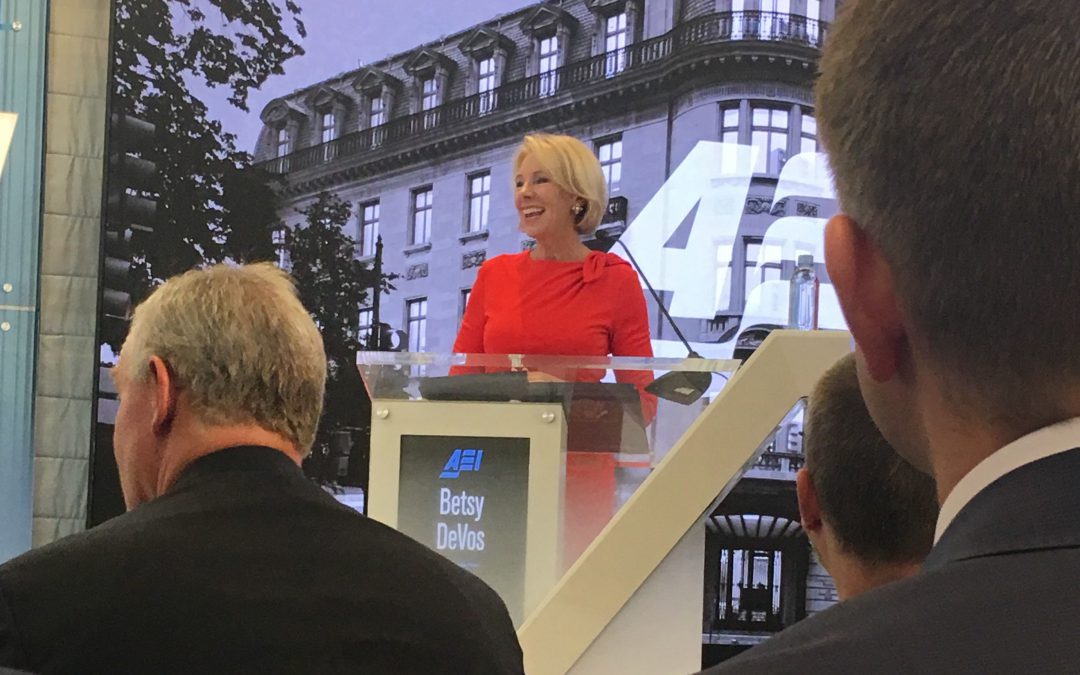 WASHINGTON – Education Secretary of Education Betsy DeVos Tuesday outlined her plan to create a $5 billion a year federal tax credit for anyone who gives money that supports scholarships for children to go to private schools.

Speaking at the conservative American Enterprise Institute, DeVos said she is asking Congress to allow individuals and businesses to give money to state-approved nonprofits that grant scholarships to children to allow them to go to a private school, receive tutoring or attend after-school programs. States would be in charge of setting up their own scholarship programs and approving the nonprofit organizations, and states could choose to opt out of this program.

Joining DeVos on stage after her speech, Counselor to the President Kelleyanne Conway said there is a lot of support for the proposal among voters.

“The appetite is there,” Conway said. “The public opinion is there.”

DeVos noted that the proposal, called Education Freedom Scholarships, would not lead to greater federal involvement in state and local education. “It doesn’t grow the government bureaucracy one tiny bit,” she said. “… It doesn’t impose any new requirements on states or on families.”

“They don’t put kids’ futures first. They put themselves first.” DeVos also referred to the teacher unions as bullies that oppose parents’ freedom to choose their children’s schools.

American Federation of Teachers President Randi Weingarten issued a statement in response to DeVos’s comments. In the statement Weingarten said that “labeling teachers ‘bullies’ is a new low… Betsy has gone out of her way to make their lives harder by trying to cut programs, silence their voices and siphon resources into private hands.”

Jon Valant, an education policy expert at the Brookings Institution, described the proposal as a cleverly constructed indirect voucher program, that he said lacks political support and could support private religious schools, a potential legal problem.
which may have issues about the potential intertwining of Church and State.

Some experts question the effectiveness of DeVos’s proposal. Eric Houck, an education professor at the University of North Carolina Chapel Hill and expert in school finance, said that recent studies have shown that students in voucher schools tend to perform about the same or worse as students in public schools. According to Houck, a better use of the $5 billion would be to directly invest in struggling public schools.

Valant had a similar opinion and said, “There is a sort of increasingly clear body of research that shows when you spend more money kids perform better.”
According to Sarah Reckhow, a political science professor at Michigan State University and expert in education policy and nonprofits, the proposal is “an extreme longshot” that is unlikely to be passed by the Democratically controlled House of Representatives.