What does data tell us about parents borrowing at HBCUs?

This fall, many entering freshmen have had to cobble together family savings, scholarships and federal loans to pay for college.

Of the many loans that make up the federal loan portfolio, one is unusual because it is a loan to the parents of the students. The Parent PLUS loan provides funds to parents with only a minimal check to see if they have the means to repay it. While they might shift some burden from the shoulders of students to those of their parents, Parent PLUS loans have particular disadvantages: they have higher  rates of interest compared to direct loans– 7.08% and 4.53% respectively; they are not linked to income-based repayment; they tend to leave older Americans paying well into their retirement years. As with all federal debt, Parent PLUS loans are also colored by social inequities—families of color are more likely to use them and consequently be dragged into indebtedness.

To understand the scope of the impact of Parent PLUS loans on HBCUs, we examined datasets from the Federal Student Aid office at the Department of Education and the National Center for Education Statistics, especially the National Postsecondary Student Aid survey, which provides a comprehensive look at several aspects of U.S. higher education.

HBCUs and Parent Plus: a step-by-step guide

This overrepresentation might not seem significant, but it becomes more pronounced when we break down borrowing by parents’ income. It’s clear that parent borrowing disproportionately hurts black families, especially low-income black families.

For white families, borrowing Parent PLUS loans can be more a financial strategy to move around money and assets without putting too many cash into higher education. More than half of white borrowers have annual household incomes above $75,000. They’re the people this program was originally designed for – middle-class families. And they are more capable of paying off the loans in the future.

But for black families, Parent PLUS loan is more likely to be the last-ditch tool to send their kids to college. Over 40% have annual household incomes of $30,000 or less and their kids are likely to have already maxed out the amount they can borrow in federal student loans. Without the Parent PLUS loans, the students cannot afford to go to college. But the heavy debt burden on parents combined with the students’ debt load, could drive low-income black families much deeper into indebtedness.

As the majority of students at HBCUs are black, HBCUs see a higher percentage of student families with Parent PLUS loans… 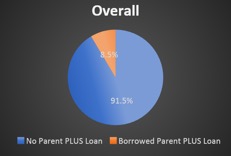 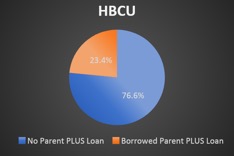 Almost a quarter of the families at HBCUs (right) borrow from Parent PLUS loans, compared with 8% at all colleges (left).

And the situation is getting worse. NPSAS data from 2012 and 2016 show that Parent PLUS loans at HBCUs have grown over four years.

For both years, the percentage of families with Parent PLUS loans at HBCUs is twice the rate at all colleges combined. There was also an increase in the percentage of borrowings at HBCUs over the four years, while the overall borrowing actually shrank by a small margin.

Another dataset below shows that HBCUs students have been heavily relying on Parent PLUS loans to finance their college costs.

More than 20% of HBCUs students used Parent PLUS loans to cover at least 30% of their costs, while only 14.3% of all undergraduates needed the loans.

To see what how this plays out for individual colleges, we compared three HBCUs in Atlanta with another private college in the same city, Emory University.

Spelman College, Morehouse College and Clark Atlanta University combined have a similar number of students as Emory University. But parents at Emory have taken on just a tiny fraction of the Parent PLUS loans that parents at the three HBCUs have.

We did a breakdown with a host of other small, private colleges with approximately the same number of students as these three HBCUs (below). It shows a stark comparison between the amount HBCUs parents borrowed as compared to other similar colleges. 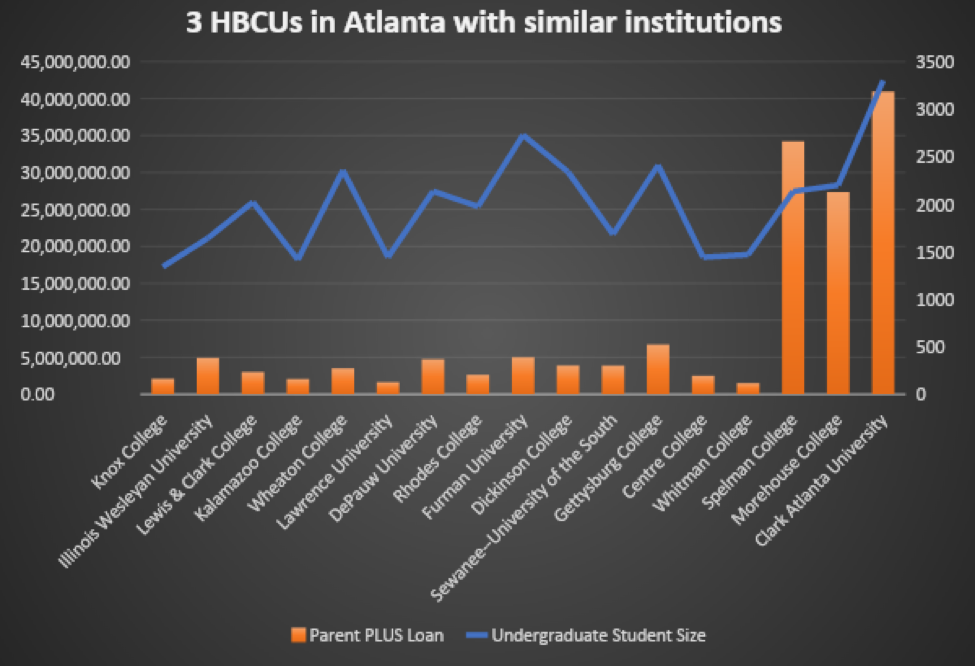