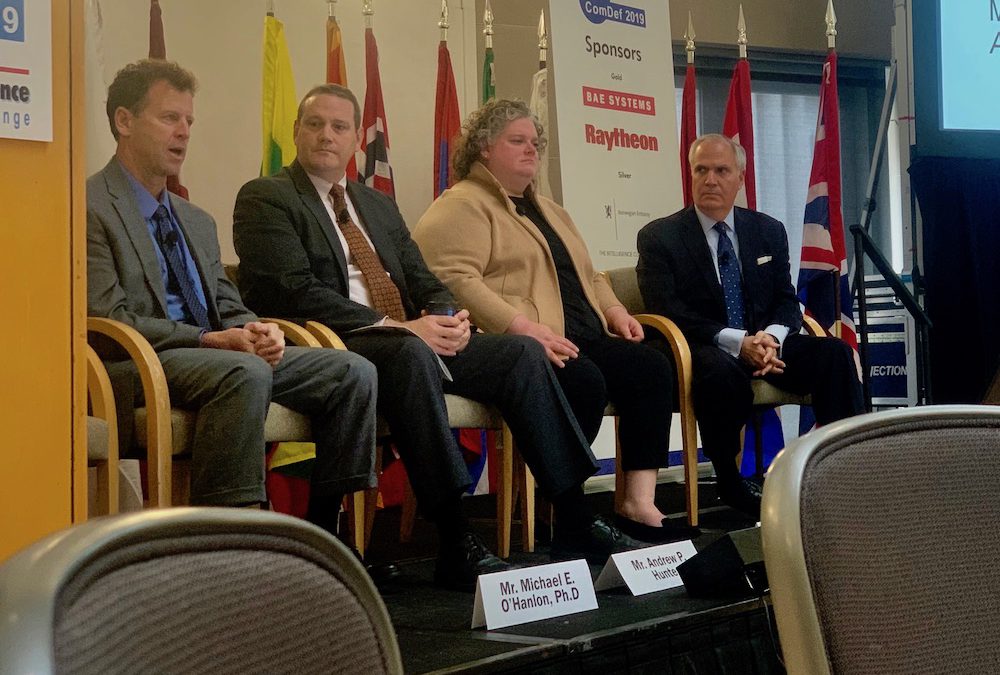 Michael O’Hanlon, specialist is U.S. defense strategy at the Brookings Institution, speaks at this year’s ComDef “Partnering for Rapid Change” convention as other panelists look on (CHIARA VERCELLONE/MNS)

WASHINGTON — If the United States doesn’t quickly adapt to the technological changes in warfare and foreign policy, major adversaries like China and Russia will have an advantage over the U.S. in future conflicts, experts say.

William Greenwalt, senior fellow at the Atlantic Council and a former staff member at the Senate Armed Services Committee, said Thursday the U.S. is falling behind in international security tactics and defense industrial capabilities needed to assess and neutralize threats.

“Bottom line is the world has changed, and the U.S. and its allies have not changed with it,” Greenwalt said.

Many U.S. military strategies in use today were implemented during the Cold War, but threats have evolved since, Greenwalt said. Most threats the U.S. faces today are technology-driven, like hypersonic weapons – which move at least five times faster than the speed of sound – and ballistic missiles that are capable of striking a country while carrying multiple warheads, which the U.S. hasn’t developed yet.

According to the National Military Strategy, a document issued by the chairman of the Joint Chiefs of Staff to the secretary of defense, the biggest challenge for the United States is the recent move toward great power competition with China and Russia as these nations gain advantage in matters like cyberwarfare.

Experts at this year’s ComDef conference said the changes the U.S. has undertaken in the last decade were necessary but not sufficient, as U.S. systems are still not evolving at the pace technology is, said Ellen Lord, under secretary of defense for acquisition and sustainment.

“These other competitors have very different models, so one way to [better compete] is through security cooperation with our major allies,” said Rear Adm. Francis Morley, director of Navy International Programs Office. “If we coordinate our efforts, we can reach a wider, broader, and more effective net of security cooperation across the globe.”

Trump has consistently increased the Defense Department budget since he took office, which experts said helped to the development of the much-needed technology. The 2020 budget, proposed in March, requested $750 billion for national security, a 9% increase from the $686 billion approved in the 2019 budget.

Michael O’Hanlon, senior fellow specializing in U.S. defense strategy at the Brookings Institution, said that even though this increase will be helpful, the Department of Defense should reorganize the distribution of resources to more pressing warfighting capabilities that have yet to develop.

“If you are really focused on China, Russia and long-term modernization, you probably don’t need quite as big of an F-35 program but you may need a bigger B-21 program; you might want to hasten the development of unmanned underwater vehicles,” said O’Hanlon.