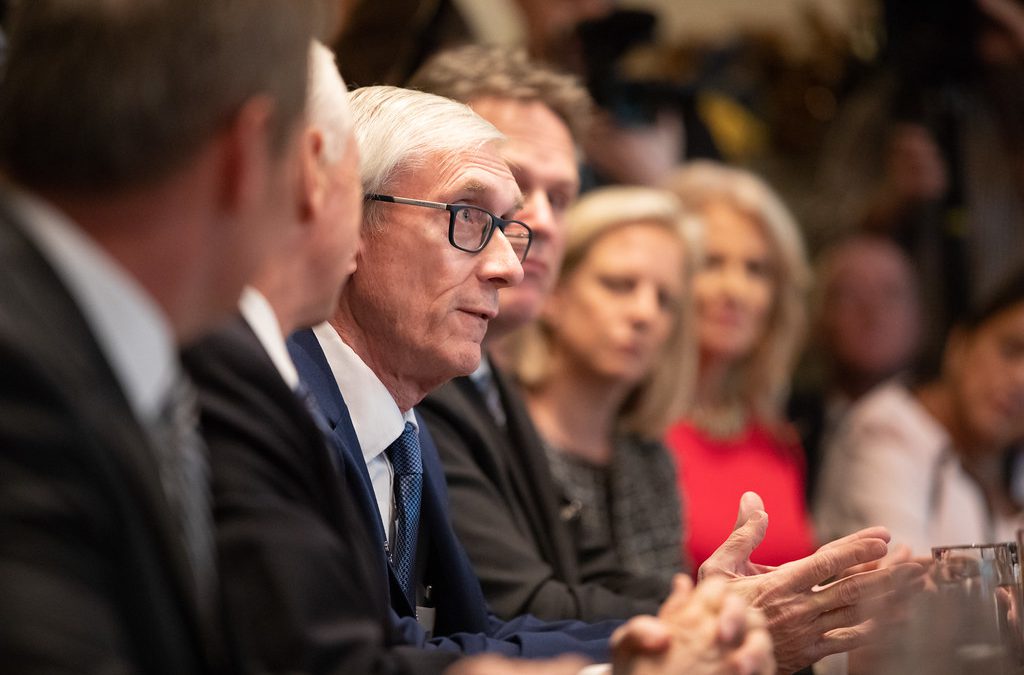 Wisconsin Gov. Tony Evers is being criticized for appointing a state director of federal affairs in Washington without first consulting the Legislature. (Photo contributed)

WASHINGTON — The top Assembly Republican is calling out Gov. Tony Evers for making an appointment to an obscure federal government relations office without asking for consent from a legislative committee as required by law.

The dispute is another in a string of public disagreements and power plays between the Republican-controlled Legislature and the Democratic governor simmering a year into his first term.

Evers selected Kate Bukowski in March to serve as the director of the Wisconsin Federal-State Relations Office in Washington, D.C. Her appointment, under a state law, requires the concurrence of the Joint Committee on Legislative Organization.

Assembly Speaker Robin Vos, R-Rochester, who heads the committee with Senate President Roger Roth, R-Appleton, sent a letter to Evers on Oct. 14 criticizing him for appointing Bukowski without informing the committee. The committee learned of her appointment when she submitted her first quarterly report, the letter said.

“It’s concerning that Governor Evers is having trouble following a simple law that requires concurrence on this important position,” Vos said in an email. “The federal-state relations director represents our state in our nation’s capital and should be advocating on behalf of Wisconsin as well as working to bring powers and responsibility back to the states.”

Evers spokeswoman Melissa Baldauff said Bukowski will go through the proper channels, including a request for concurrence from the Joint Committee on Legislative Organization. But she emphasized that “nothing prohibits her from serving in her role.”

The Wisconsin Legislative Reference Bureau confirmed that Bukowski, like other elected officials, can continue to serve in her role while concurrence from the JCLO is pending.

“The JCLO does not meet often and has not acted with urgency,” Baldauff said.

The JCLO does not have a set schedule of meetings. The last time the committee convened was in August.

Bukowski’s predecessor, Kyle Roskam, received his concurrence only a month after beginning his term in October 2015. Bukowski had no immediate comment.

The disagreement is the latest example of mounting tensions between state Republicans and Democrats since Evers took office in January. In December, the Republican-controlled Legislature and outgoing Republican Gov. Scott Walker passed legislation to rein in powers of the governor and attorney general aimed at Evers and Josh Kaul, both newly elected Democrats.

The Legislature also introduced a constitutional amendment to limit the governor’s partial veto authority in July. That amendment passed the Wisconsin Senate on Tuesday and now goes to the Assembly.

The office in question was created by the state Department of Administration in 1965 to manage federal aid applications and aid programs. The office also provided information on pending federal legislation that would be relevant to state agencies.

The position expanded to become the Federal-State Relations Office in 1973 to operate as a link between the Legislature and the federal government. The office is first mentioned in Wisconsin statutes in 1979 after the state ordered the Department of Administration to report the office’s activities to the Legislature quarterly. The first director was David Beightol in 1983.

Wisconsin was an early adopter of the concept of a federal-state relations office. Some states, including Nevada only two years ago, are just beginning to carve out space in Washington, D.C., to take advantage of federal programs and funding and improve state and federal communication.

Under the Wisconsin statute, the office is composed of a director and staff assistant. The director makes between $73,000 and $120,000 a year, and the role has no fixed term. Roskam held the position for roughly three-and-a-half years, and his 2018 salary was roughly $100,000.

The office today has evolved into more of a coordination role, according to the reference bureau. That includes, for example, coordinating the 2013 series of letters from the governor and the state congressional delegation to the agriculture secretary relating to improving school lunches.

“Someone in this role now has conversations with federal agencies on or off the record, oftentimes informal conversations, that ask, ‘What are you looking to do with this program?’” said John Hudak, deputy director of the Center for Effective Management at the Brookings Institution. “And then they can take the next step in a coordinating role and communicate that information within the state.”

The office briefs the congressional delegation on state issues, including converting Highway 41 to an interstate in 2015.

Bukowski, who officially began on March 18, works out of the governor’s D.C. office, a few blocks north of the U.S. Capitol, in the Hall of the States, a building shared by about 20 other state and territorial offices as well as media organizations such as Fox News. Bukowski’s fifth-floor office suite has yet to assign an assistant. She previously worked as the director of corporate relations at the Democratic Governors Association.

Within two weeks of taking office, Bukowski met with the National Governors Association on Wisconsin’s interest in improving rural broadband access; she also has met with staff from the offices of Sens. Tammy Baldwin and Ron Johnson as well as Reps. Glenn Grothman, R-6th; Gwen Moore, D-4th; Mark Pocan, D-2nd; and Jim Sensenbrenner, R-5th, according to her quarterly reports.