Should veterans be able to train and adopt service dogs at the VA’s expense? 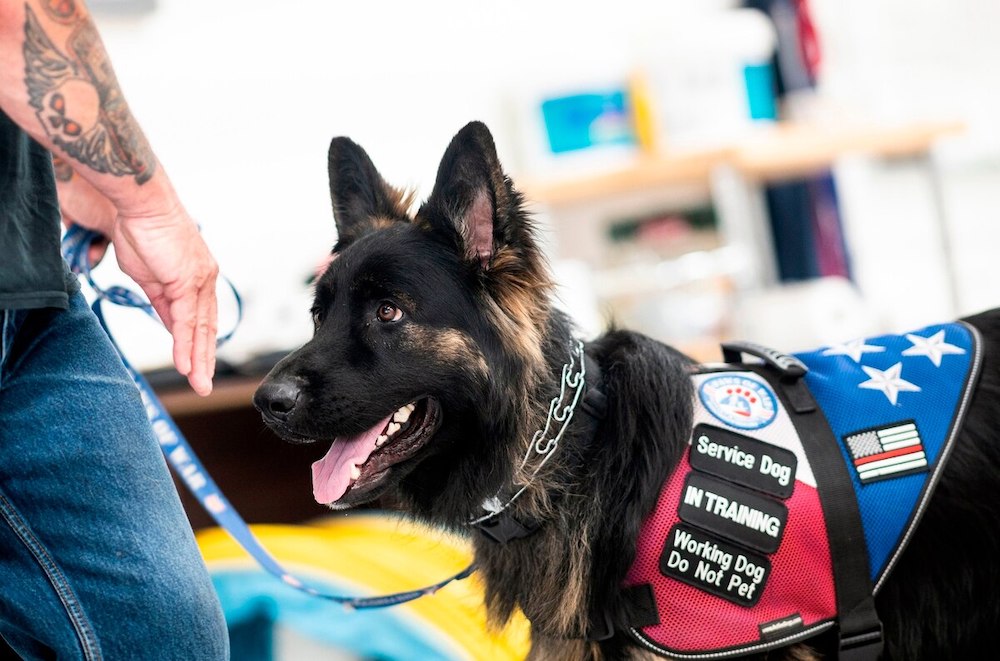 A service dog waits for training at the Paws of War office in Nesconset, Long Island, New York, on June 10, 2019. (Johannes Eisele/AFP via Getty Images)

WASHINGTON — A bill introduced two months ago that would give veterans the opportunity to train service dogs to reduce the effects of mental health issues has yet to come to a vote, even though it should be a “no-brainer,” one of the Republican co-sponsors said Tuesday.

“It’s really simple: these service dogs can save lives, they can improve the veterans’ health, lower their incidence of mental health issues, reduce their amount of medication, give them their mobility back, and give them their lives back,” Ohio Republican Rep. Steve Stivers said at a news conference.

The measure has 136 co-sponsors, 45 Democrats and 91 Republicans.

“The VA said I needed a wheelchair and I refused that,” Powers said. “In the four years I’ve had her, I’ve had four falls. All four times I’ve either left her at home or left her in my truck. So to say it doesn’t work, I’m here to argue otherwise.”

Morgan, who was at the news conference, has also helped Powers deal with his post-traumatic stress disorder in stressful situations like getting stuck in traffic, which causes him to get anxious.

The measure was introduced in September to direct the Department of Veterans Affairs to carry out a pilot program on dog-training therapy, pairing veterans diagnosed with PTSD with service dogs and encourage them to train the dogs themselves. Once the program ends, the veterans would be able to adopt their dogs to continue the therapy.

Rep. Michael Waltz, R-Fla., another co-sponsor of the bill and an Army veteran, questioned why the VA doesn’t cover the costs of getting and training a service dog.

“This should be part of the menu of what the VA provides. […] The benefits are clear,” Waltz said. “Our veterans right now are finding [service dogs] through their own means or through wonderful veterans services.”

Nonprofit organizations associated with providing and training the dogs would assume the training cost and some of the food while the dogs are being trained.

According to the 2019 National Veteran Suicide Prevention Annual Report, over 6,100 veterans died by suicide in 2017, which accounted for 14 percent of all deaths by suicide among adults. The report said almost 60 percent had been diagnosed with a mental health disorder or substance abuse.

Walter Parker, a Vietnam War veteran, said he struggled adapting to civilian life after he left the military because he couldn’t let go of his experiences in Vietnam, causing him to feel ashamed of having served.

“My life was literally gone. I was on the verge of suicide,” he said. “When that dog looked into my eyes, I knew he could see my soul, I knew there was something about the dog that was going to change my life” he said of the service dog who joined him at the news conference.