Trump awards arts and humanities medals for the first time 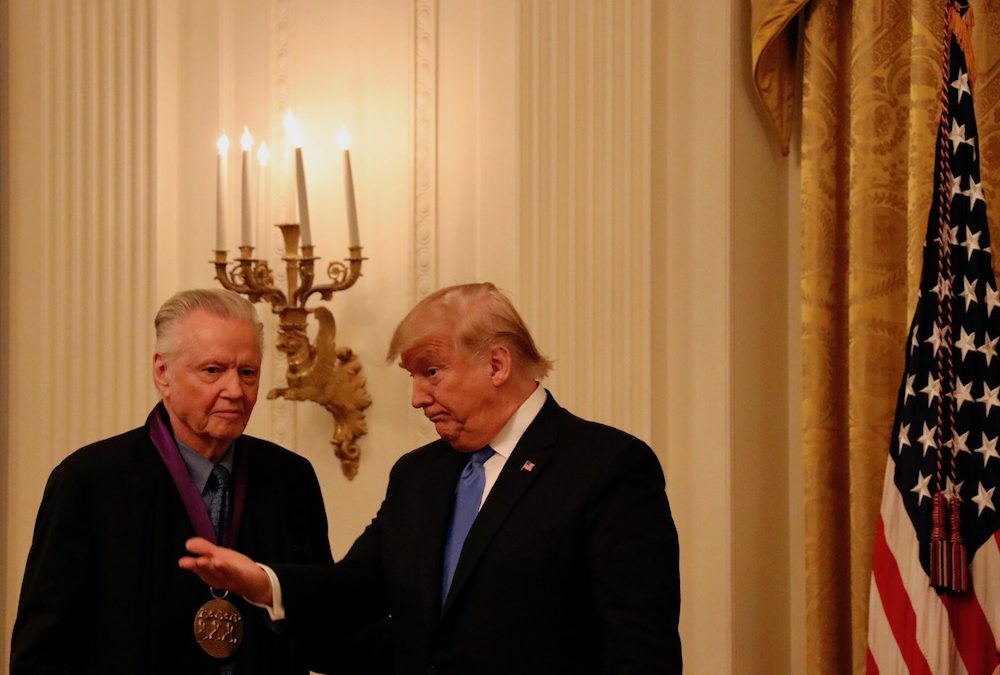 WASHINGTON — Jon Voight is “an actor of astonishing range and depth” and “somebody I happen to really like,” President Donald Trump said Thursday as he awarded the Oscar-winning actor the National Medal of Arts during a White House ceremony.

Voight was one of four recipients of the National Medal of Arts, alongside bluegrass-country singer Alison Krauss, philanthropist Sharon Percy Rockefeller and the musicians of the U.S. military, who were recognized by the White House for “personifying excellence in music and service to country.”

Trump recognized Voight for “his exceptional capacity as an actor to portray deeply complex characters” and to give “insights into the richness of the human mind and heart.”

“Jon captures the imagination of the audiences and dominates almost every single scene he is in,” the president said.

It was the first time the Trump administration has awarded the medal; it was an annual honor in past administrations. The last ceremony was held in 2016 by President Barack Obama. Trump has had a difficult relationship with a broad range of Hollywood figures and artists, who disagree with the president over such policies as strict immigration enforcement and efforts to roll back abortion rights.

Voight, who is also the father of actor Angelina Jolie, won the Academy Award for best actor in 1978 for his portrayal of a paraplegic Vietnam War veteran in the movie Coming Home. He starred in the Academy Award-winning Midnight Cowboy, too.

In May, the actor posted two videos on Twitter in which he affirmed his support for Trump, calling him “the greatest president since Abraham Lincoln.” Earlier in the year, the president appointed Voight to be a trustee of the John F. Kennedy Center for the Performing Arts through 2024.

Patterson, the Edgar Award-winning author of numerous books, including a 2016 investigative book about multimillionaire sex offender Jeffrey Epstein, is “one of the most prolific and talented fiction writers of all times,” Trump said.

The author has sold more than 400 million books worldwide.

The president also thanked The Inn At Little Washington chef O’Connell for “filling us with pride in our national cuisine.” In 1978, O’Connell transformed a gas station into the three-Michelin Star restaurant.

“Every day he and his team pursue absolute perfection,” he said. “He is a trailblazing industry pioneer.”