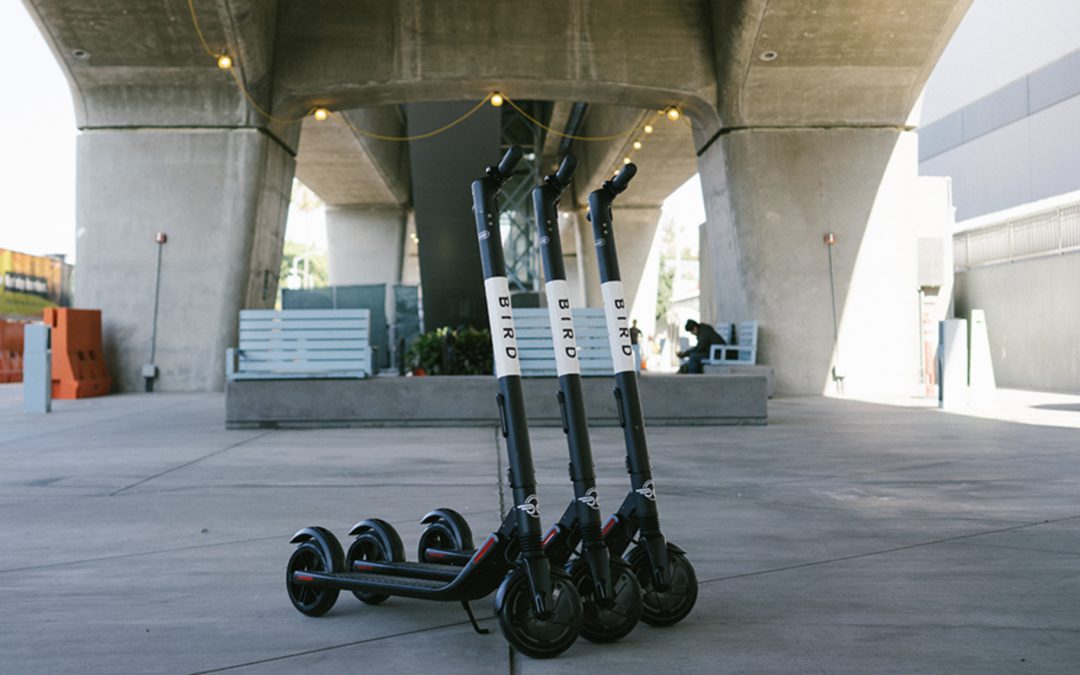 Not all cities in US embrace shared electric scooters. (PHOTO COURTESY OF BIRD)

Washington — In September 2017, a shared electric scooter appeared for the first time in the U.S. on the streets of Santa Monica, California.
Two years later, according to Santa Monica government data, more than 2,000 electric scooters have been added, \operated by startup Bird that sent out the first scooter as well as other rental companies that piggybacked on the popularity of the scooters.
Nationwide, Americans took 38.3 million trips on shared electric scooters last year, according to data from the National Association of City Transportation Officials.
But with few safety regulations, the scooters have also resulted in a rising number of injuries and accidents.
The scooters, which can reach speeds of 15 mph, fills a gap in the “last mile” of transit, which offers a better way for commuters to transit from bus stops or subway stations to their destinations. Riders use mobile applications to rent the electric scooters, scan the QR code with their smartphones to start the trip and park them on the street when they are done. after arriving at their destinations. Bird charges 15 cents per minute, with an additional $1 charged as a basic fee.
However, potential dangers such as traffic crashes and injuries are also in the “last mile” minefield.
According to statistics from the Santa Monica Police Department, 122 collisions involving shared mobility devices occurred from January 2017 to September 2019; 10% of the crashes resulted in severe injuries, while 80% of accidents resulted in a minor visible injury or complaint of pain. While the city of Portland released a survey result of 2018 on electric scooters, it showed electric-scooter injury visits accounted for about 5 percent of total traffic crash through a 120-day pilot period last year.
Lawmakers have taken notice of the accidents and some are trying to pass strict safety laws.
But the companies are fighting back. Bird scored a win when California amended its scooter law to allow people over 18 to ride without helmets and to increase the highway speeds allowed for scooters.
Under California law, riders using electric scooters must be at least 16 years old, have driving licenses, wear a helmet while using the vehicle and must not drive on the sidewalk. However, in the United States, most roads do not have dedicated bicycle lanes so violations of regulations on the sidewalk cannot be resolved at this stage. To counter these regulations, Bird pushed a bill that allows riders over 18 years of age to ride electric scooters without helmets, this bill also aims to get rid of speed limit.
To fend off regulations, the companies also are trying to show civic concern.
Bird has adopted a series of measures to encourage and educate riders to comply with the law to reduce accidents, such as providing free helmets, attaching stickers that list safety regulations on the pedals of scooters, and requiring driver license information to register to use the application for renting an electric scooter.
Skip, one of the eight leading electric scooter vendors, has raised funding to launch its program providing free unlimited 30-minute trips for low-income people who are at 200% federal poverty level or below.
Bird launched new electric vehicles named “Bird Cruisers” this summer, which could accommodate two adults at the same time, creating public accessibility among disabled people.
“Bird Cruiser is an inclusive electric-powered option that is approachable, easy-to-ride and comfortable on rough roads,” said Travis VanderZanden, founder and CEO of Bird.
To guarantee access to scooters to all areas of the city, the Washington Department of Transportation gave its conditions for approved electric scooter operators to deploy at least 400 electric scooters throughout “equity emphasis areas,” which are small geographic areas that have significant concentration of low-income and minority populations.
“When evenly distributed, e-scooters have a chance at helping cities meet equity and accessibility goals,” said Abby Morgan, an expert on connected and automated vehicle deployment evaluations at Kittelson&Associates. “For neighborhoods positioned further away from public transit stops or a city center, e-scooters may be able to bridge the gap.”
But, not all cities want shared electric scooters on the road. San Francisco has begun a licensing system because it is dissatisfied with shared electric scooters occupying street space.
Meanwhile, Washington is embracing the scooters, but with limits. It gave conditional approval to four electric scooter operators, chosen from eight existing operators, and temporarily limited the maximum of shared electric scooters to 10,000.