In Iowa, the Bernie Sanders campaign makes a final push for minority votes 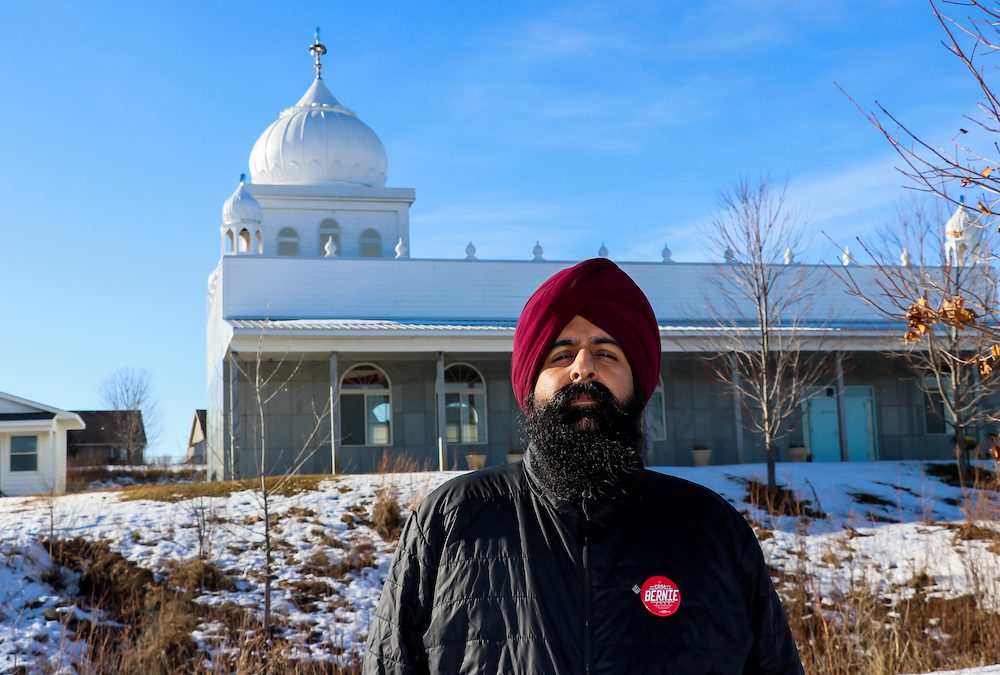 Arish Singh, a volunteer for the Bernie Sanders campaign in Iowa, helped target minority and refugee voters in the run-up to the caucus. (Mark Satter/Medill News Service)

DES MOINES – Just a short drive from downtown Des Moines is a building that seems out of place in the state of Iowa — a Sikh temple, or gurudwara. A white dome announces the presence of the single-story building, located in a housing development in the suburb of Johnston.

On Sunday, the day before the Iowa caucus, a team from the Bernie Sanders campaign made one of their final canvassing stops at the gurudwara, closing out several weeks of a targeted push to convince undecided voters in minority and refugee communities across Des Moines to turn out for Senator Sanders on Monday.

“We hope that you will make the trip and come out to caucus for Bernie Sanders,” said Arish Singh, addressing a crowd of nearly 100 worshipers at the Sikh congregation. “Some people didn’t believe that there are Sikhs in Iowa and we just want to represent you all.”

“This is the only campaign that has come to the gurudwara,” said Anoop Ballagan, who immigrated to Iowa from India in 1991 and owns two gas stations in Des Moines.

Singh, who lives in Chicago, Ill. has repeated some variation of his speech at similar locations across Des Moines for the past nine days. Two days prior, it was at the Islamic Center of Des Moines, in the city’s Merle Hay neighborhood. He is often joined by Mohammed Shakibnia, a member of the Sanders campaign’s Arab/Muslim Constituency Organizing team.

Singh himself made headlines in 2016 when he and one other protestor were ejected from a Donald Trump rally in Muscatine, Iowa for unfurling a banner that read “Stop Hate.”

He and other members of the Sanders campaign were tasked with reaching out to Nepalese, Burmese, Bosnian and Muslim communities, among others, in the hope that rival campaigns had overlooked them.

In a state with a population that is over 90% white, the Sanders campaign is hoping that minority communities could tip the scales on caucus day.

Members of the congregation agreed that this was a first.

“I’ve never seen it before. People coming to the temple, it makes a difference. It feels more like a home where people care about us. We’re still in the minority, so it makes us feel good when people come and talk to us,” said Bajaan Aulakh, who has lived in the area for nearly 50 years.

Gurleen Aaur, a freshman at Iowa State University, said that the presence of campaign representatives at the temple was positive. “For people my age its definitely helpful to know about each candidate to figure out who we want to vote for,” she said.

“These are people who have been excluded from the political process. They’re a marginalized community because I think in large part because campaigns don’t engage them,” said Singh.

But some members of the gurudwara disagreed with the campaign’s tactic altogether.

“It’s manipulative to come here. People are here for religious activities, not politics. We don’t like to be singled out as immigrants, we’re the same as every other American and this sort of thing creates division,” said Manoj Binwal, 35.

Senator Sanders has surged in recent polls, placing him ahead of former Vice President Joe Biden less than 24 hours before caucusing begins.