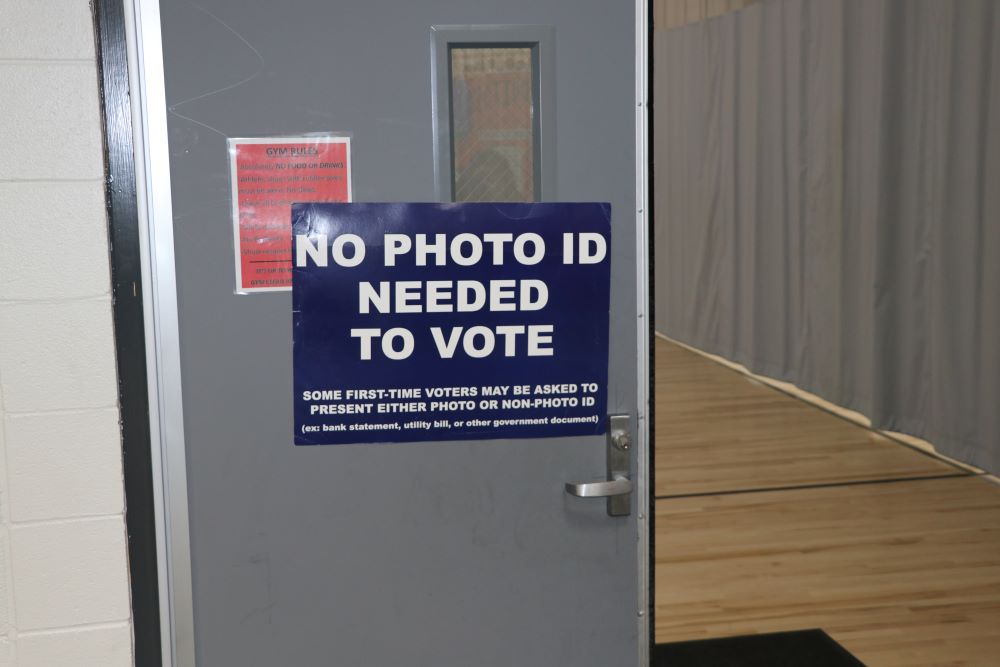 A sign outside a polling place in Charlotte, NC, saying that a photo is not required to vote for the Super Tuesday election. (Brian Johnson/MNS)

Despite a statewide referendum in 2018 that approved a constitutional amendment requiring a photo ID to be shown by voters at polling places and a bill approved by the legislature, North Carolina went to the polls on Super Tuesday without a requirement in place.

And it seems like it will be at least a few months before North Carolina voters will have to show a photo ID before they get a ballot. Legal challenges have the fate of the law tied up in court.

In the 2018 midterm elections, North Carolina voters approved a constitutional amendment that required a photo ID to be shown by voters voting in person, and it required the state legislature to enact voter ID laws.

A month later, the legislature passed such a law, which allowed a variety of IDs to be used, including driver’s licenses, passports, student IDs, government-issued IDs or a free North Carolina voter photo identification card.

People who possessed government issued IDs or student IDs would have had to apply to have their IDs approved before voting. Voters without an ID would also be to cast a ballot without an ID if they signed an “affidavit under the penalty of perjury at the voting place,” claiming a reasonable impediment to getting an ID. However, the law did not allow public-assistance photo IDs to be used as an acceptable form of ID.

Both the amendment and the law were challenged in court. The law was blocked by both federal and state courts ahead of the 2020 primaries, allowing voters to vote without presenting a photo ID.

When U.S. District Judge Loretta Biggs blocked the law in late 2019, she said some of the law was based on discriminatory intent. “The state’s newly expanded list of IDs is that it continues to primarily include IDs which minority voters disproportionately lack, and leaves out those which minority voters are more likely to have,” she wrote.

The law was also blocked by a ruling by the North Carolina Court of Appeals.

In North Carolina, as in the rest of the country, Republicans generally supported the voter ID laws, while Democrats generally opposed it.

“Democratic judges at both the state and federal levels took the bizarre stance that the voter-mandated law sponsored by an African American Democrat was racially discriminatory,” said Lauren Horsch, a spokeswoman for the Senate President Pro Tempore Phil Berger, a Republican. “In an era where there are concerns about foreign interference in elections, we should be doing everything we can to instill confidence in our elections.”

Voter ID laws are unnecessary and suppress the vote of minorities, says Allison Riggs, the chief counsel for voting rights at the Southern Coalition for Social Justice, whose organization’s goal includes protecting the voting rights. Riggs said that Republicans in North Carolina have been trying to pass Voter ID laws for the last 10 years. Courts struck down a 2013 voter ID law in 2016.

There remains a threat of voter fraud, said Joseph Kyzer, director of communications for House Speaker Tim Moore, a Republican. A board of elections audit showed 508 people voted illegally in 2016, and the lack of a voter ID law makes it difficult to show how much fraud has occurred.

Riggs said there was only one documented case of in-person voter impersonation in 2018.

“I’m 100% certain that if the ID had been in effect just like in 2016, eligible voters would have been disenfranchised,” Riggs said. In 2016, more than 1,000 eligible voters were excluded from voting, according to Riggs. Voter ID is more about maintaining power for Republicans than having fair elections, Riggs said.

Voters on March 3 were divided about the need for voter ID laws.

“I’m opposed to it,” said Andrew Bain. “There’s no fraud in America. … there’s no evidence of it. It’s just an attempt by Republicans to suppress voter turnout.”

Jon Bullins agreed, saying “I think any border we set up to stop people from being able to vote is inhumane, and it will affect certain groups of people disproportionately.”

However, other North Carolina voters were ambivalent about or in favor of voter ID laws.

Anthony Daniels said, “I’m in the middle with that. We should have IDs… Without an ID more finagling can go on. I know people argue that less financially well-off people don’t have access to get an ID, but I don’t know if that’s all true.”

“It’s just a precaution,” said Esi Bonney. “It’s not going to hurt anyone, or add any stress. You carry your ID everywhere with you, so it shouldn’t be an issue.”