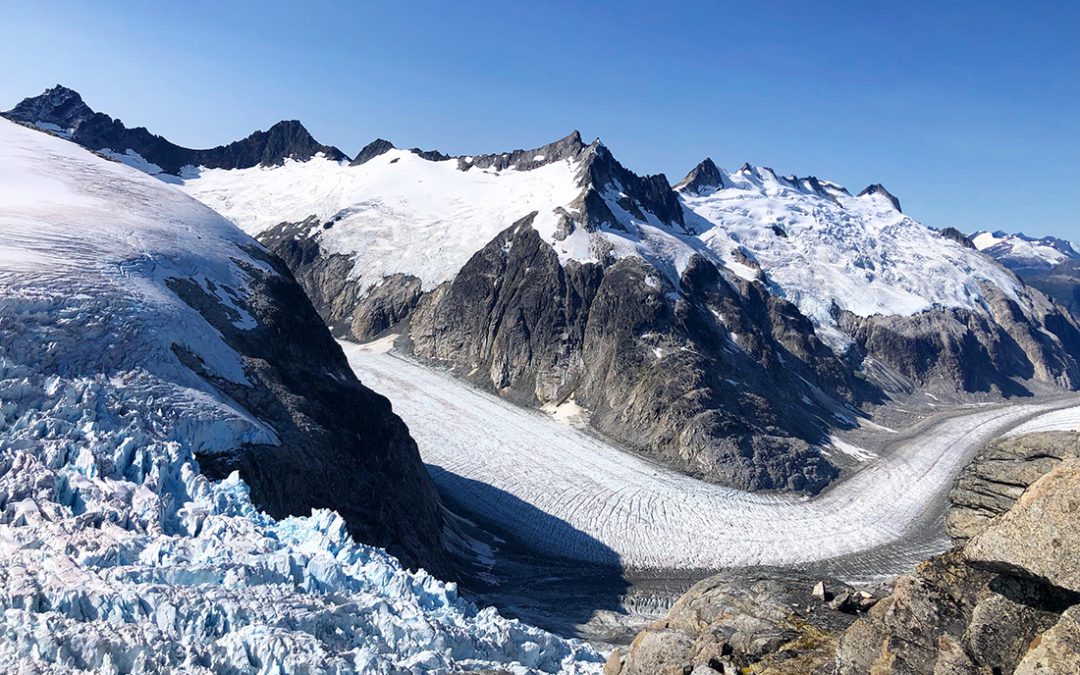 Allie Balter, a geochemistry PhD student at Columbia, took this photo of the Gilkey Trench on the Juneau Icefield while doing fieldwork last July. She could not return to Alaska this summer.

Sophia Horigan was supposed to study gypsy moths in a southwestern Michigan forest this spring and summer.

Instead, the University of Chicago PhD student is studying in her apartment, where she rotates between a wooden table and a grey armchair.

With her field research in Michigan shut down because of the pandemic, she has foregone conducting experiments on the gypsy moths and substituted using mathematical models to learn about diseases that kill the moths.

“It’ll be helpful in the end, and I feel lucky that I am not at a total standstill, even though my fieldwork got canceled,” she said.

Scientists in ecology, geochemistry and other fields often conduct field research in the spring or summer, but many of these research trips have been prohibited now due to the coronavirus pandemic. While the pause in field research has allowed scientists to spend more time on data analysis and reading academic papers, experts say that fieldwork is an important part of research in some fields, and the cancellation of this research could delay some students’ completion of their PhD programs.

Diarmaid O’Foighil, chair of ecology and evolutionary biology at the University of Michigan, said a large part of his department’s work takes place in the field.

“And it happens worldwide,” he said. “So we have people working on ecosystems all over the planet. Every summer, there’s a major exodus of faculty, postdocs, grad students and undergrads working in the field, and they can’t do that.”

In March, fieldwork at the University of Michigan was stopped, but starting May 8, researchers were allowed to return to the field in southeastern Michigan. On June 1, they could start conducting field research anywhere in the state.

But, O’Foighil said, only a small fraction of the department’s workforce does field research in the state.

On Wednesday, the university allowed researchers to start doing fieldwork anywhere in the United States. They have to receive permission from their college to do so, though.

To fill their time away from the field, some scientists have turned to their computers. Horigan is learning the programming language in which her model is written and grasping how to run the model.

Horigan said the gypsy moth populations grow rapidly and crash once every nine or 10 years. A virus and a fungus both contribute to the demise of the insects. Mathematical models allow researchers to see how a parameter, like precipitation, affects another variable, like the number of moths. Horigan said the parameter she is studying is a moth’s susceptibility to the fungus if it has already been infected by the virus. She uses her model to inform her field research.

“You can see what values of different parameters actually have an impact that is interesting, and then you can take those numbers and put them into your fieldwork,” she said.

Greg Dwyer, Horigan’s adviser, said that normally his graduate students collect data in the field and then incorporate it into a model. Now, his students are running their models before they gather data in the field, he said.

Allie Balter, a geochemistry PhD student at Columbia University, was supposed to go to Alaska for two weeks in July to participate in the Juneau Icefield Program.

Balter would have skied on the icefield, collecting rocks with undergraduate students. She said the rocks were once in or beneath glaciers, and scientists determine the age that the rocks became exposed to air so they can find out when the glacier left that area. She also would have taught classes to the students. She said she’s “really bummed” that her field research trip was canceled.

“I feel like, for me, fieldwork is a big reason why I got into the field I got into, like I really love doing fieldwork,” she said.

Balter added that she makes interpretations in the field. She observes the sequence of glacial retreat events when she’s in the field, she said.

Instead of doing research on the icefield, she will take her qualifying exam, required for all PhD students, in early July, three months later than the original test date, which was postponed because of the coronavirus pandemic.

During the pandemic, she said she has been writing, analyzing data and reading papers. She said she skims abstracts of papers in her field or similar fields.

“I think it just gives me a better breadth of knowledge of both my field and like surrounding fields so that I can make connections and inferences from my data better,” she said.

Balter added that it also allows her to have more in-depth conversations with scientists who do not study the same subject as hers.

Edgcomb’s field research has “come to a complete stop for the time being.” She planned to go on a field research trip on a boat in August, which will probably be pushed back to spring 2020. She said she also she studies denitrification — a process that removes nitrogen — in sediments beneath oyster aquaculture farms, but the town where the research takes place, Falmouth, Mass., canceled its aquaculture operations this summer.

“Every single project is set back,” Edgcomb said.

Katie Dixon, an ecology and evolution PhD student at the University of Chicago, said she was supposed to go to Missoula, Mont., in the spring and summer to study a virus that infects Douglas-fir tussock moths. The third-year PhD student had been planning on conducting field research for two more summers. If she continues with that plan, she will have to stay in her PhD program for a sixth year.

“And that was not in my plan before,” she said. “And then funding is always an issue. … But I’m hoping people will be flexible, like this happened to a lot of people.”

John Freudenstein, the chair of Ohio State University’s Department of Evolution, Ecology and Organismal Biology, also said some PhD students in his department think they may need additional time to finish their PhDs.

The pause in field research also affects assistant professors, who are trying to earn tenure. To compensate, the University of Michigan’s College of Literature, Science, and the Arts and other academic institutions have given these professors an additional year to earn tenure.

Not all field research was canceled this spring and summer, though. Douglas Buhler, Michigan State University’s assistant vice president of research and innovation and the university’s director of AgBioResearch, said some agricultural research at Michigan State has been allowed since the start of the pandemic.

Stephen Hsu, the university’s senior vice president for research and innovation, sent a letter to faculty on March 23 saying that essential research activities could continue, including “seasonally dependent agricultural and environmental field research with critical implications for human and animal health, as well as food security.”

Horigan said that field researchers are used to their plans changing.

“I think that ecologists and field researchers in particular are fairly used to the fact that nature is dynamic, and nothing will ever go to plan, really,” she said. “So, hopefully, I think a lot of us are a lot more flexible and creative about what to do when that happens, and so I think it’s kind of built some resilience for things like this.”