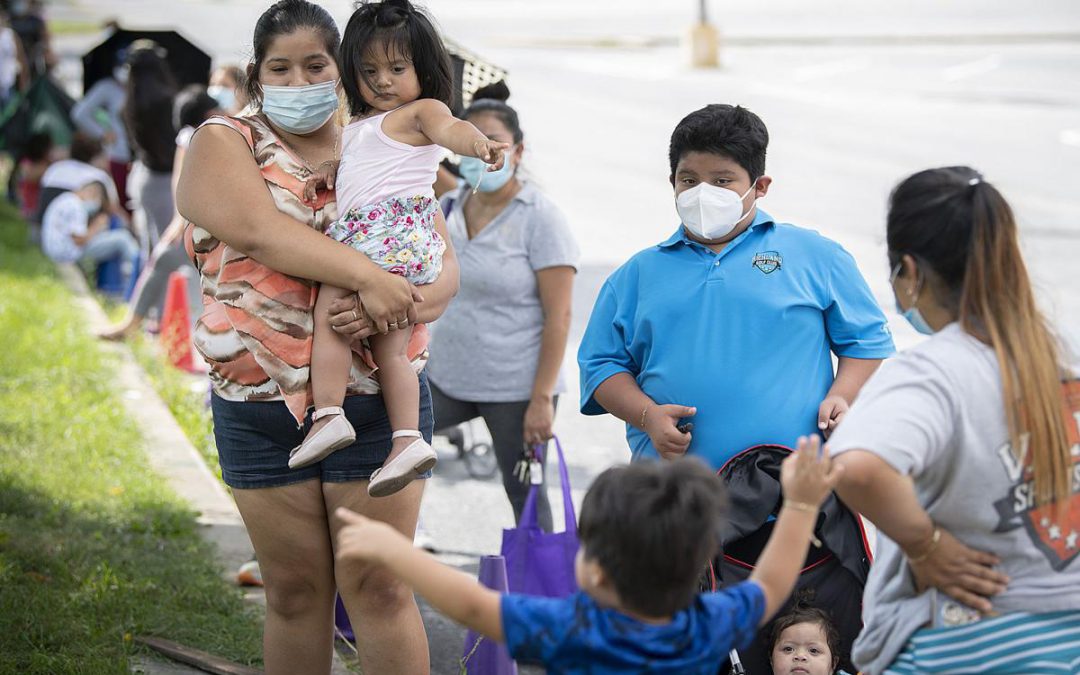 As Frederick County public schools begin remote learning amid concerns about COVID-19, homeless and other vulnerable students face a heightened set of challenges.

Late last month, the Board of Education announced that the county’s public schools will move to a full virtual model of instruction, and while many parents and teachers agree with this decision, some are worried about the impact remote learning will have on students and families facing housing insecurity.

“[We]’ve seen a lot more housing insecurity and a lot more people that had to struggle to go somewhere,” said MaryLynn Hinde, co-founder and program coordinator of the Student Homelessness Initiative Partnership in Frederick County. “That’s created a good amount of chaos and trauma for families.”

But youth homelessness, while exacerbated by the effects of COVID-19, is not a new issue within the county. Frederick has seen an 8 percent decrease in its overall homeless population in recent years, but the county’s population of homeless public school children has increased, according to the Frederick County Office for Children and Families’ most recent community needs assessment.

According to Hinde, by the end of the 2019-2020 school year, 942 students in the county were considered homeless youth, or McKinney-Vento eligible, compared to 853 from the previous school year. The McKinney-Vento Homeless Assistance Act defines homeless youth as children who lack a “fixed, regular and adequate nighttime residence” and may be facing specific circumstances such as living in cars or public spaces, among others. In reality, Hinde said the number of McKinney-Vento students may be higher since SHIP data only reflects youth that have been reported as homeless.

But with students now isolated from their teachers and other school supervisors amid COVID-19, Hinde said she thinks the number of reported McKinney-Vento students may drop, as the issue of housing insecurity has become more difficult to identify and address. This has led county teachers and local organizations to work in overdrive to increase their support to students who may not openly disclose the stressors going on at home.

Through one-on-one check-ins, meal drop-offs, and increased access to school supplies and digital devices, Frederick teachers are clocking in extra hours without additional pay to ensure that physical separation from their students and classrooms doesn’t impede the care they provide.

“It’s a lot different when they’re at home,” said Casey Keyser, a fifth-grade teacher at Butterfly Ridge Elementary School. “A lot of students don’t feel comfortable turning on their cameras because there are things going on in their home that they don’t want students to see.”

With heightened unemployment rates and some families on the verge of eviction, the financial strain COVID-19 has put on families is not something that’s just felt by adults. While young children may not be able to fully comprehend the pandemic’s impact on their family, Keyser said they inevitably internalize the stress their parents are going through.

“They feel the anxiety from a mom or a single dad. [And] they feel it if there’s tension in the house with not being able to pay rent… the stress emulates off of parents whether they want it to or not,” Keyser said.

Homelessness was nearly a certainty for Josefina Romero, a single mom of three in Frederick.

Romero, who was furloughed from her full-time job amid the pandemic, was given an eviction notice that would go into effect by the end of August if she didn’t pay back nearly $4,500 in rent. After applying to Frederick’s $3 million Emergency Renters’ Assistance Program, she was able to receive funds to cover about half of the rent that she owes, enough for her landlord to let her stay for the time being.

For Romero’s family, this relief has only temporarily stalled the possibility of eviction and homelessness down the road if she doesn’t eventually pay back the rent in full. With her oldest child attending Monocacy Middle School virtually in the fall, a 4-year-old who is about to start kindergarten online and a 6-month-old to look after, eviction would throw their lives in limbo, making remote learning nearly impossible.

Added to this, Romero said helping her young children navigate online learning is especially challenging because she doesn’t write English fluently. “When he asks me, ‘Mom, can you help me to do this?’ I have no idea how to help him,” Romero said about her 11-year-old son.

For many Frederick teachers and school leaders, remote learning has required a multi-pronged approach to supporting students and families like Romero’s on all levels.

Missy Dirks, president of the Frederick County Teachers’ Association, said that Frederick’s public schools put together a “Care Team” when COVID-19 first hit in the spring. The team is responsible for reaching out to students who have fallen behind on assignments or have consistently missed online classes. When it comes to students’ physical health, Dirks added that Frederick County Public Schools will continue meal distribution throughout the fall to ensure that no child goes hungry while away from school.

“Everybody is kicking into high gear,” Dirks said. “Technology is another issue [and] FCPS was able to get hotspots out to students who might not have internet capability at their house.”

According to Dirks, FCPS worked to ensure all public school students from sixth through 12th grade had a device assigned to them. Romero said administrators at Waverley are working to get her son a laptop for the upcoming school year.

Hinde from SHIP also said that counselors of the organization’s New Horizons program, which is designed to help McKinney-Vento students graduate from high school, have developed “trusting” and “long-term” relationships with the 90 students involved in the program. According to Hinde, these deepened relationships have been critical for counselors to be able to identify when a student they’re working with is distressed.

“They know the questions to ask, they know what the students may not be telling them,” Hinde said. “[And] they have an easier time finding out what the real story is and addressing those needs right away.”

But for teachers countywide, the upcoming school year also means a new class of students they’ve never met before, each of whom are facing unique home circumstances and requiring different forms of support. As learning becomes virtual, building the type of relationships that help teachers identify when a child may be facing issues such as housing or food insecurity, takes time.

“I just got my class list, and I don’t know the names on that list,” Keyser said. “I don’t know these students and families and they don’t know me, and that’s terrifying. We’re going to have to work even harder to try to build that relationship and trust with not only students but with parents.”