WASHINGTON – On Saturday, President Donald Trump nominated federal appeals court judge Amy Coney Barrett as his pick for the Supreme Court, setting up a swift confirmation process promised by Senate Majority Leader Mitch McConnell that could lead to her taking the seat held by the late Ruth Bader Ginsburg before the Nov. 3 election.

Barrett, 48, is a favorite of conservatives with a track record of anti-abortion, anti-Affordable Care Act and pro-Second Amendment rulings and writings. The 7th U.S. Circuit Court of Appeals judge appeared with Trump at a Rose Garden event to announce her nomination before an audience of influential Republican members of Congress, Vice President Mike Pence and other GOP leaders.

In her acceptance speech, Barrett praised the late Justice Antonin Scalia, who she clerked for more than 20 years saying he had an “incalculable influence” on her life.

“[Scalia’s] judicial philosophy is mine, too,” Barrett said. “A judge must apply the law as written.  Judges are not policymakers, and they must be resolute in setting aside any policy views they might hold.”

With 53 Republicans in the Senate, only GOP Sens. Susan Collins of Maine and Lisa Murkowski of Alaska have stated that they would not confirm a new justice so close to the election, leaving the Democratic minority powerless to stop the confirmation.

With Barrett confirmed, the Supreme Court would lean more conservative, with six of the nine justices aligning with conservative viewpoints, affecting the laws of America for generations to come.

Trump’s announcement followed the morning’s National Prayer March, an event led by Evangelical Rev. Franklin Graham, which featured an appearance by Pence. Barrett is a devout Catholic and some of those opposed to her nomination are concerned her religious views may sway her decisions.

Jessica Ivetich, of Chicago, was in D.C. to pay her respects to Ginsburg.

“I don’t know if this particular nominee will be able to separate church and state, which is a fundamental need if you’re going to serve on the Supreme Court,” said Ivetich.

Many Democrats are furious at Trump and Senate Republicans for pushing a confirmation only about a month from the election.

In 2016, when Scalia died nearly 300 days before the election, Senate Republicans refused to hold a confirmation vote on President Barack Obama’s nominee of Merrick, claiming that the election cycle had already begun and the voters deserved a choice in the replacement. That seat was filled by Justice Brett Kavanaugh in 2018.

Sen. Mazie Hirono, D-Hawaii, a member of the Judiciary Committee, told CNN that Republicans are trying to “steal” the Supreme Court seat in the middle of a global pandemic. Meanwhile Democrats, including Reps. Ayanna Pressley of Massachusetts and Ilhan Omar of Minnesota, and Sens. Cory Booker of New Jersey and Elizabeth Warren of Massachusetts, took to Twitter earlier in the week to tweet, “No confirmation until inauguration.”

Deidra Hubay of Pittsburgh attended Barrett’s nominee announcement in protest. Hubay said that if Barrett is confirmed, it will increase her concern about controversial issues bound to come before the high court.

“As an American and as a woman, I’m scared,” said Hubay. “I don’t think people understand how monumental this is and how the courts are going to be tipped. Women’s rights are literally on the ballot now.”

Hubay said there is the the potential for the court to overturn Roe v. Wade, the ruling that legalized abortion. Overturning Roe v. Wade has been a battle cry for many conservatives.

Downtown D.C. was filled with people on both sides of whether Barrett should be confirmed. Many showed up to support Barrett after the morning’s Prayer March.

Julia VanDergrift of Toledo, Ohio said she understands Barrett’s religious beliefs brings about scrutiny, but her own Christian faith has her supporting the nominee.

“I know she’s under a lot of scrutiny for her religious beliefs imposing on her idea on how to handle things, but I think that’s ridiculous,” said VanDergrift. “Being an atheist is also going to influence your decision. You don’t just have a non-biased worldview.”

Suzzanne Monk of D.C., agreed with VanDergrift and added that the president’s choice of another woman for the court is a way to honor the late justice.

“Trump is honoring RBG’s legacy of being a woman on the court by nominating another woman,” said Monk.

Bang Co, 28 of D.C., said Barrett’s nomination is simply a political ploy, one meant to bring women voters to Trump’s side in the election rather than an attempt to carry forward Ginsburg’s legacy. Co added that he’s not a fan of Barrett and thinks her confirmation would hurt the nation.

Majority Leader Senator Mitch McConnell is expected to meet with Barrett on Oct. 12, with the first round of Judiciary Committee questioning to begin the following day. 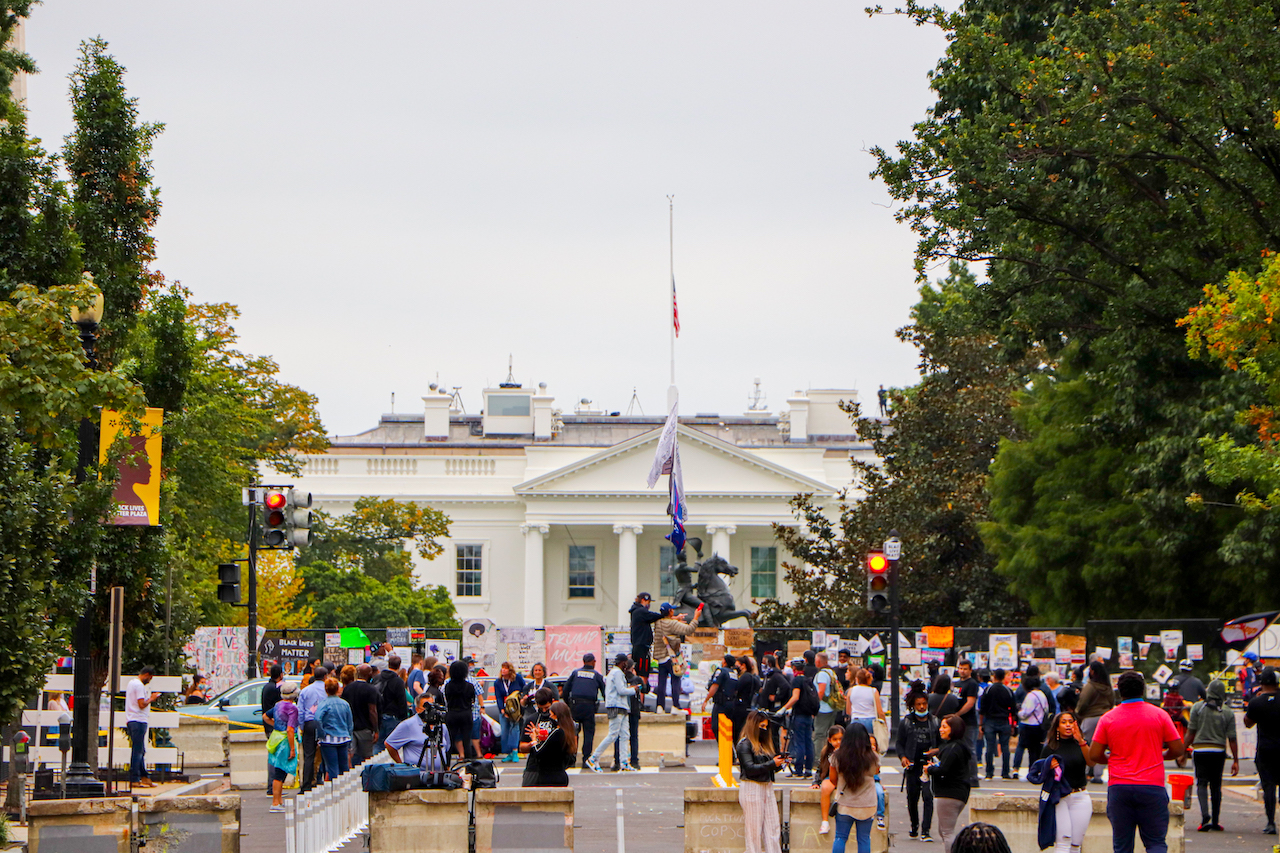 “I’m a Christian. So obviously, I’m going to be for what [Amy Coney Barrett] stands for. I know that she’s getting a lot of scrutiny right now because of her religious beliefs possibly imposing on her ideas of how to handle things in the Supreme Court. Your lack of belief in God, being an atheist is also going to influence your decision. The lady who just passed away, she was probably an atheist, I have no doubt. And if not, then whatever she was influenced by, you don’t just have a non-biased worldview. Either you believe in God or you don’t. One of those things is going to influence your decision and what you do in that position, so I’m obviously for her.” -Julia VanDergrift, 21 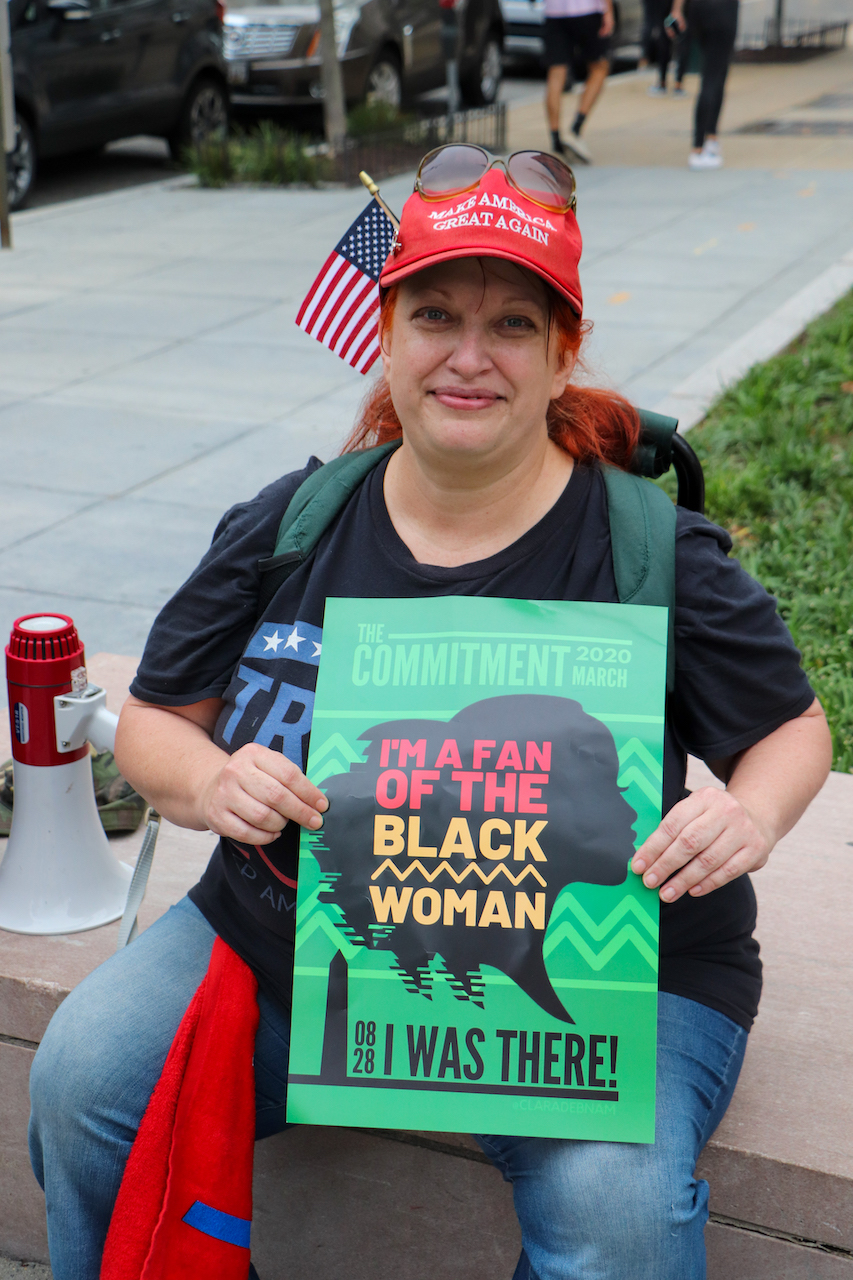 “I know they’re gonna hit her on her faith, but I am actually a person of faith. I appreciate that she has a strong sense of faith and that shouldn’t be a reason to not put someone [in office]. We want to look at her record and we want to look at the kind of person she is and, frankly, I think she’s a really good choice. ” -Suzzanne Monk 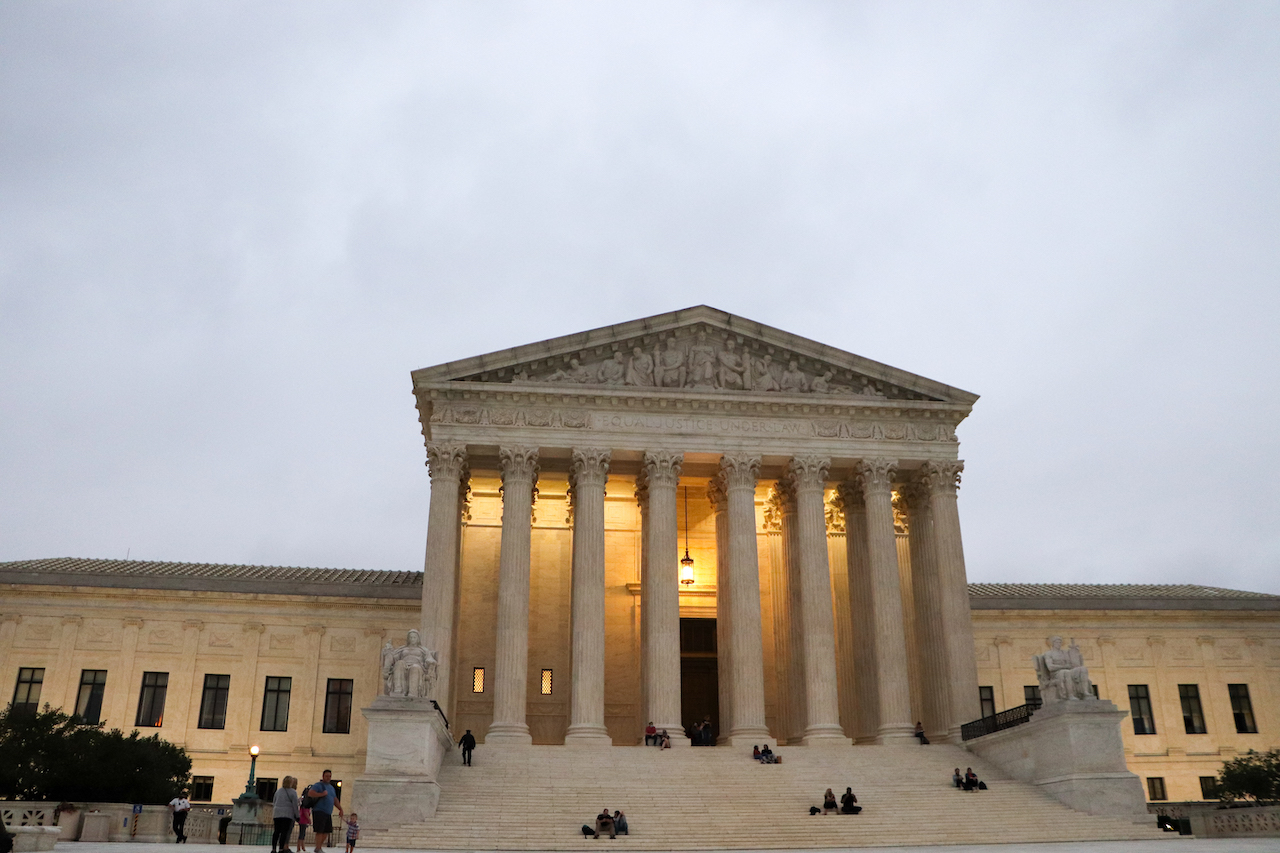 “I think that they should follow the precedent that they set in 2016. It’s probably not within the mainstream of the liberal wing, but I think within their powers the controlling party for the Senate in the White House gets to make a nominee, but I think the American people should present the resistance to obstruct it, at least until the election.” -Mike Ramdadt, 24

“Mitt Romney voted to impeach the president and he deemed then that the President was not worthy to continue to serve and he is now when he nominates this justice. The hypocrisy … that they’re presenting is so transparent, it’s like actually ridiculous. It’s not surprising, but it’s very interesting.” -Zach Anderson, 23

“I drove in from Pittsburgh to come out here, I felt like it was my civic duty. I served my country in the military, and now I feel like I need to serve my country again. This isn’t the country that I signed up to serve, I don’t even recognize this country.” -Deidra Hubay, 23 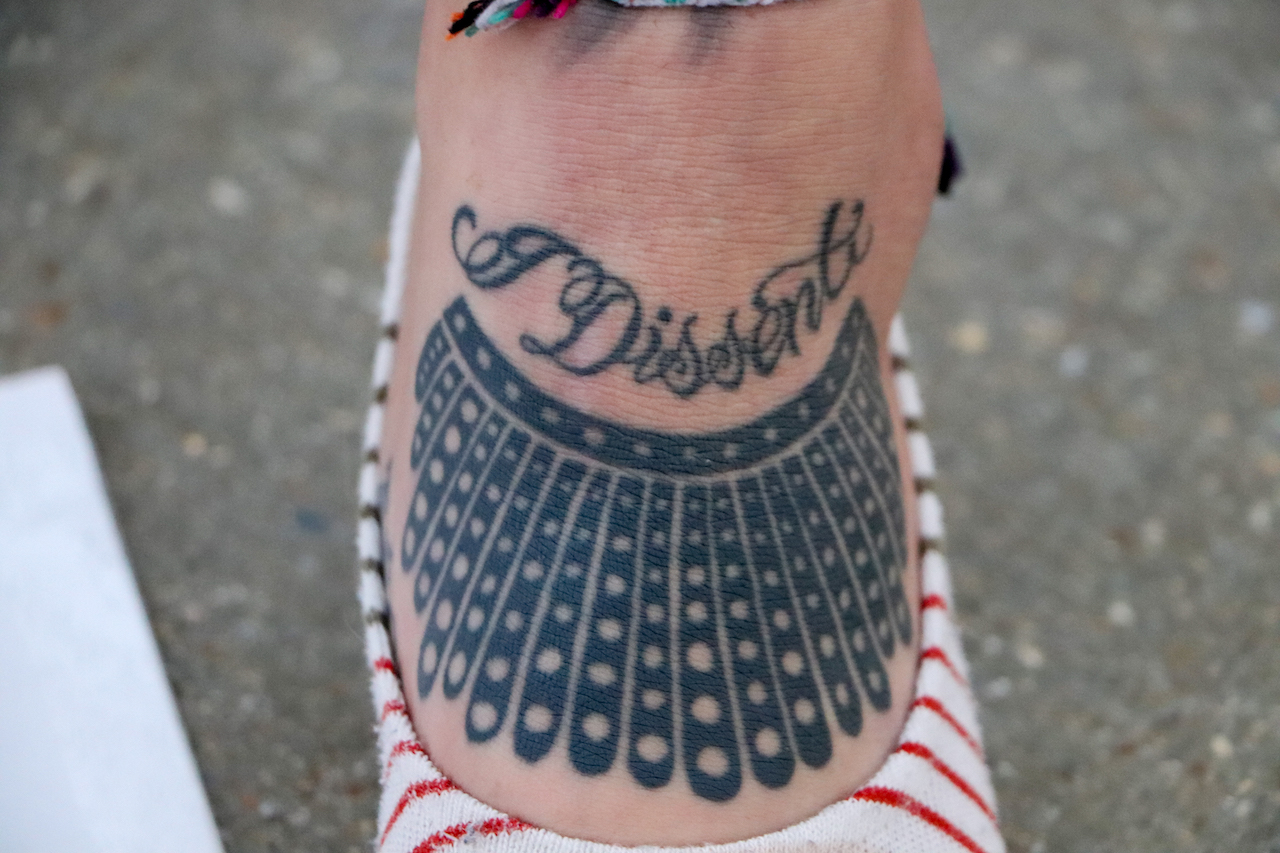 “I had this before [Ginsburg’s] passing, it says ‘I dissent.’ She’s always been one of my idols, her and Anne Braden. She’s part of the reason I am the way that I am, and that women can do the things they can do. I’m just thankful. I can own my credit card, I can do all these things because of her. Sad is an understatement.” 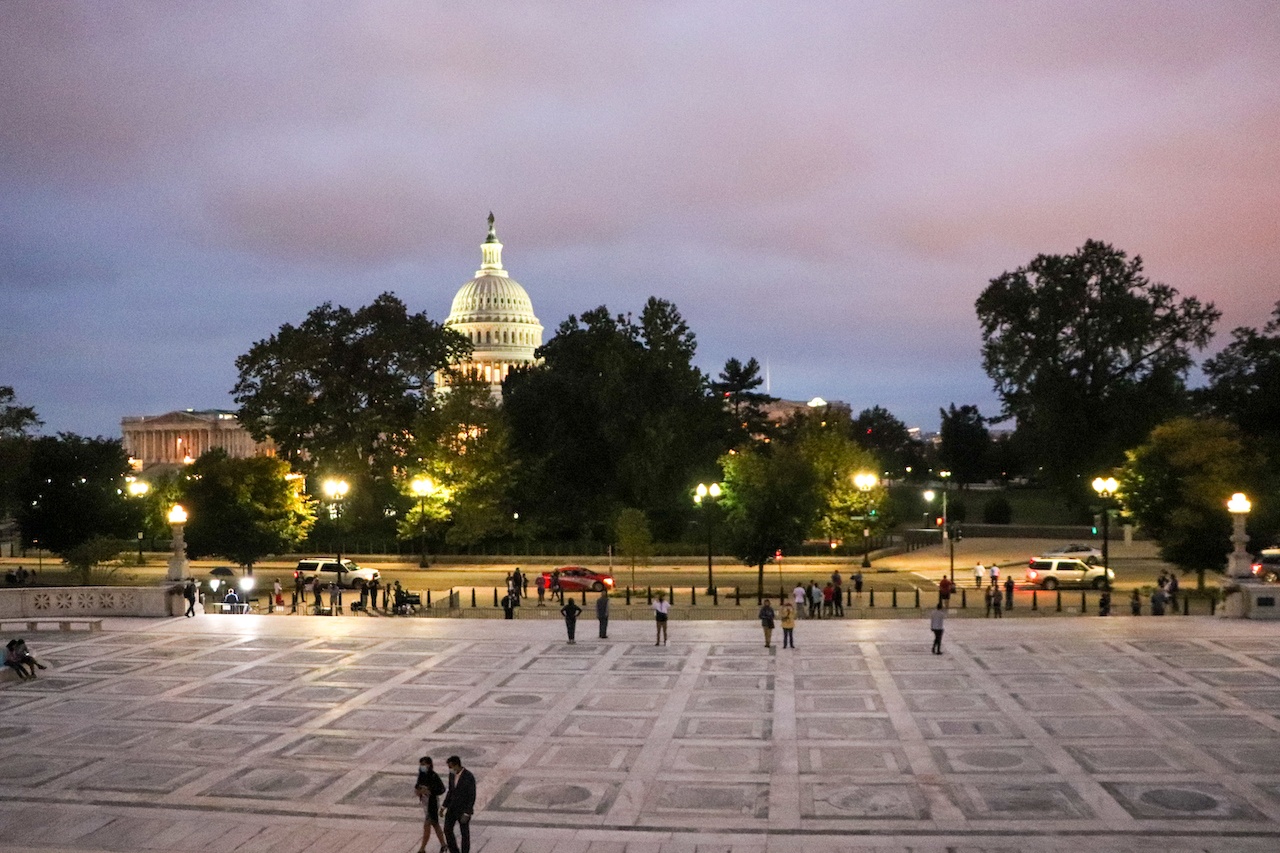 “Ruth Bader Ginsburg’s family should be able to grieve a little bit during this time and not make this such a quick media frenzy … I wish there was just a little bit more time and a little bit slower of a process.” -Jessica Ivetich, 25

“It’s not very impressive, and honestly as a Hoosier, I’m a little bit embarrassed. I think the selection was kind of made to play off getting the women vote. It was like he said, ‘Do you want a women in power? Here you go.’ I think it’s going to negatively impact our nation and the progress he’s made so far. I’m just not a fan. I’m not happy about it.” -Bang Co, 28