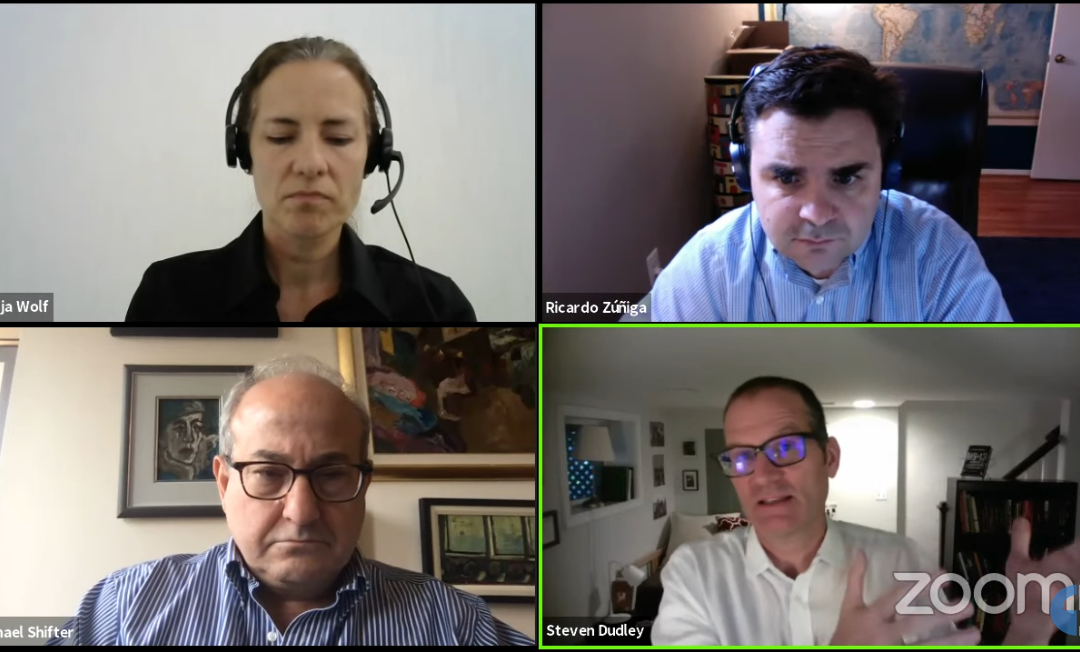 Steven Dudley, author of MS-13: The Making of America's Most Notorious Gang, advocates for more complex approach to criminal gangs both in the U.S. and Central America.

WASHINGTON — The U.S. should stop trying to combat Central American criminal groups solely through deportation and start tackling the societal issues that allow the groups a foothold in the country, transnational crime experts said Tuesday.

“The U.S. does not help tackle gangs if it pursues deportations,” Sonja Wolf, the author of Mano Dura: The Politics of Gang Control in El Salvador, said at a discussion on the policy implications of transnational crime sponsored by Inter-American Dlialogue, a foreign affairs think tank. “The U.S. needs to look more at its own domestic situation and tackle marginalization in its own local communities.”
The hardline approach to organized crime adopted by the U.S. and its partners, commonly referred to as “mano dura,” has become governments’ “go-to approach,” investigator Steven Dudley said.

“It’s very politically palpable to have arrests, people put in jail, have people sentenced,” Dudley, the author of MS-13: The Making of America’s Most Notorious Gang, said. “Until we start thinking of these as a larger milieu of what’s happening in society, what’s happening with immigrants, all these systemic issues, the easy answer is always going to be mano dura.”

Organizations such as MS-13, the Los Angeles-born gang that has expanded overseas and now operates mostly from El Salvador, benefit from the simplistic approach taken by governments, Dudley added.

“Policies that focus on law enforcement, especially these very repressive strategies, will not help dismantle what are really social groups,” Wolf said. “We need more comprehensive strategies, we need investment in communities.”
Dudley recommended creating strategies with the help of business executive, religious groups, the military, law enforcement and experts.

Criminal organizations such as MS-13 have also become so powerful that governments have felt forced to give in to their demands, the experts said. Last month, an investigation by Salvadoran newspaper El Faro indicated that President Nayib Bukele has allegedly been negotiating with MS-13 to reduce crime rates and increase electoral support in El Salvador. A close ally of the Trump administration, Bukele has made headlines for flirting with a hardline approach to criminal groups in the country since rising to power last year. For Dudley, there is a “seeming quid pro quo between the gangs and the administration” in El Salvador.