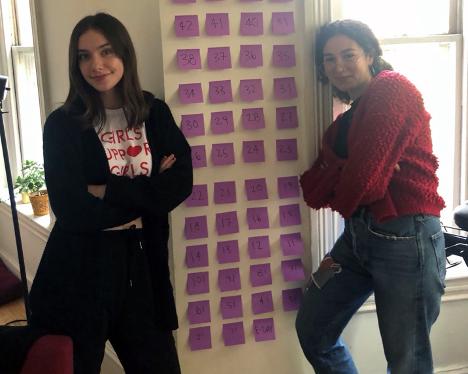 WASHINGTON — With the COVID-19 pandemic raging across the country in the closing months of the presidential campaign, Democratic campaign workers have been forced off the trail and into their living rooms where they’ve cold called hundreds of people a day — often in states far from their own — trying to woo voters and volunteers into Biden’s corner.

Rachael Packard and Solis Doyle have spent almost every hour over the past three months in the apartment they share in DC. They’re working to mobilize voters in Ohio and Florida, and although they can’t be there physically, they’re doing everything they can to connect with voters in a virtual world.

Packard, who started as a field organizer for the Ohio Democratic Party in August, has only visited Ohio once, during a road trip. Despite her lack of familiarity with the state, her job is to convince Ohio residents to “dedicate their time, free of charge to Joe Biden, and Democrats in Ohio,” Packard said.

“There’s a huge barrier immediately,” Packard said, “which is that most people who get involved with campaigns are older. They’re not as tech savvy, which makes it difficult for the subset of the population that we usually rely on to get involved.”

All phone banks, text banks, and surrogate events are now happening on Zoom as opposed to the usual union halls, coffee shops, and churches.

Because canvassing and “kitchen table” conversations are no longer viable campaign tools, Packard said she relies on data from public voter files and people in the area that have been involved in politics for a while. These individuals serve as virtual guides to the region and can connect her to potential volunteers.

Another benefit of organizing remotely, Packard said, is that out of state volunteers can get involved in ways that have been previously impossible.

“One positive of the virtual environment is that people in really blue areas like California and New Jersey and New York can help out in a way that they couldn’t before without getting on a plane and flying into Sandusky, Ohio,” Packard said. “They get to feel like they’re calling into a place that’s meaningful, like they’re flipping Ohio blue.”

However, one challenge of the virtual campaign has been establishing boundaries while working from home. While most Americans are learning to balance work and home life in the remote COVID-19 era, Solis Doyle said her job doesn’t allow for that. Since joining Biden for President almost eight months ago, Doyle has carried her laptop everywhere she goes.

“If I go to the grocery store, like, that is stressful for me, because someone could call me and say ‘we are in a crisis,’” Doyle explained. “Last Saturday I was sleeping and my boss called me at 12:45 AM and you have to pick up the phone. People will call me at 7:30 in the morning being like, ‘I need you to do this thing right now.’ I don’t have any hour of the day where I can’t respond.”

While Doyle said that kind of pressure is “crushing,” she also said the excitement makes it all worthwhile.

“It is nice to feel like someone really needs you in one minute,” she said. “There are times when people are like, ‘Thank God, you answered the phone’ and I know I’m really helping someone with something.”

While both Doyle and Packard said it has been hard to deal with stress without the comradery that a normal team would share during long nights at the campaign office, they explained that being roommates both working to elect Biden has helped them get through it together.

“Politics can be so jargony and it’s great to have someone who understands what you mean,” Doyle said. “And then we have similar hours. And it’s similar pressure, especially because we’re in Ohio and Florida and everyone’s eyes are at you. It’s a nice burden to share.”