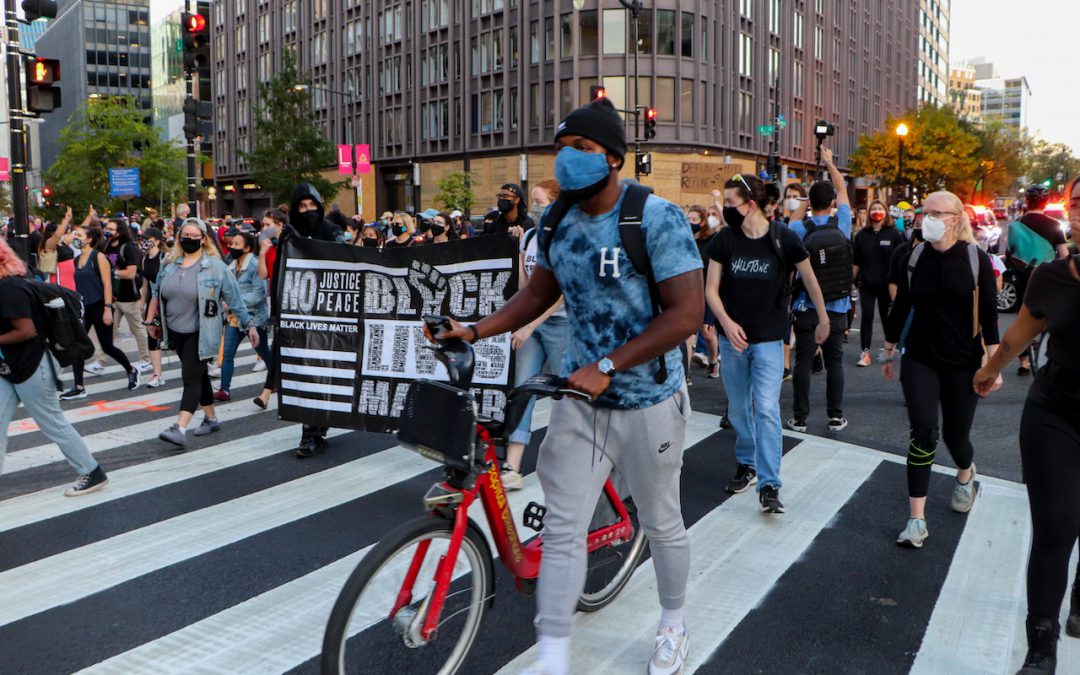 As Washingtonians gleefully poured into the streets, many gathered to celebrate on Black Lives Matter Plaza, which leads directly to the White House. They opened libations, danced and, despite a still raging pandemic, expressed a sense of widespread relief.

But, for some, the feelings of victory were more complicated. Black Lives Matter protesters have been marching in Washington since learning of Ahmaud Arbery’s death in February. Arbery was killed by two armed white men in South Georgia, and his murder helped reignite a national conversation around racism.

Protesters who have been marching now for nearly six months, said that they are glad to have Donald Trump out of office but celebrating Biden’s win did not feel appropriate.

“Today was an emotional rollercoaster,” Sean Michael Love said in a video posted to Twitter by Chuck Modiano. “One of the things that really got me today was people popping champagne on Black Lives Matter Plaza. Most of those people were white people, who haven’t been out here consistently throughout the protests all summer. Just this week, we had three arrests, we had people maced, we had people pepper-sprayed on that Plaza.”

The anti-scale fence around Lafayette Square, previously adorned with art paying tribute to victims of police violence, was instead covered with anti-Trump and pro-Biden/Harris posters. Most protesters do not support Trump, but do not particularly align with Biden or Harris given their involvement with criminal justice policies, like Biden’s 1994 crime bill, that they say perpetuated systemic racism by criminalizing Black and brown people. 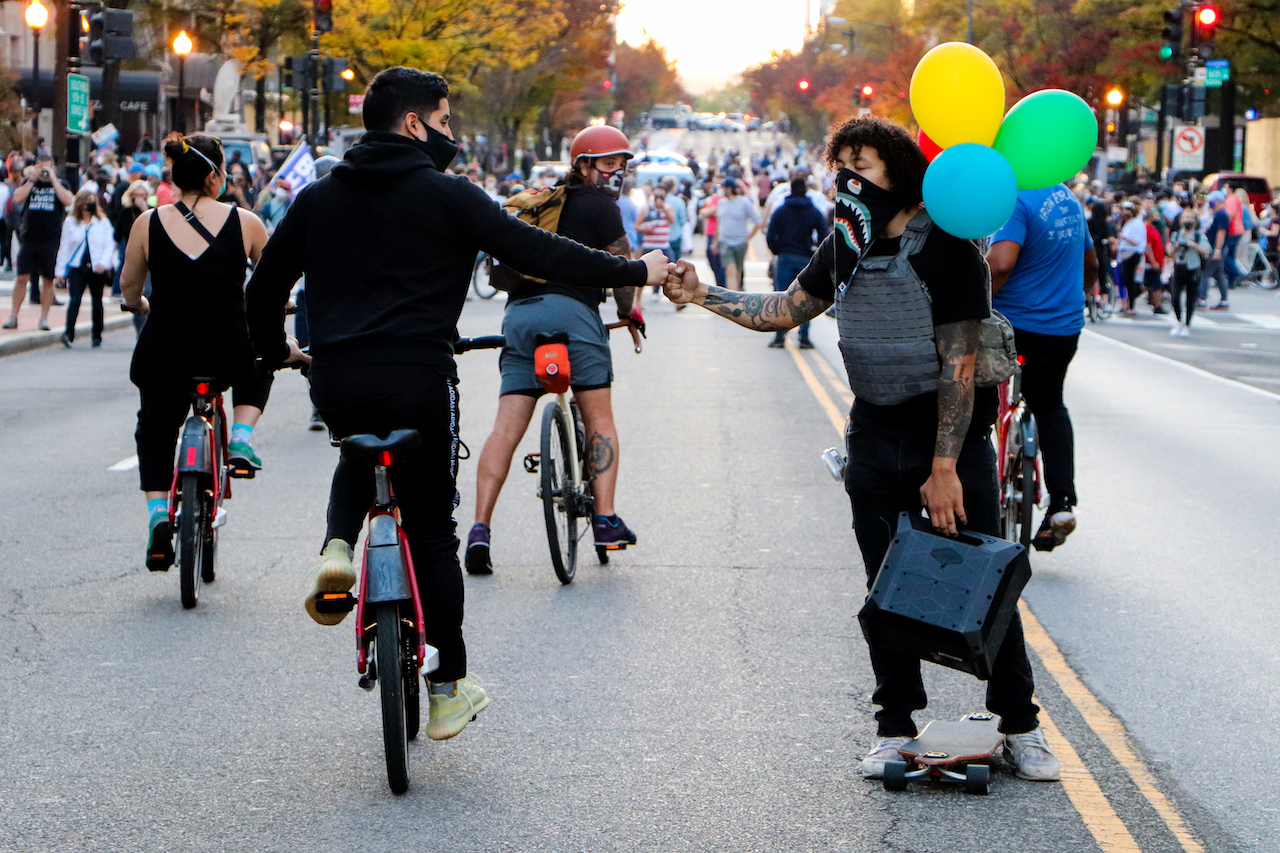 One of the organizers with D.C. Protests, fist bumps a bystander who rode by the march and expressed his support. (Madison Muller/MNS)

Local racial justice groups D.C. Protests and the They/Them Collective have been holding weekly marches since late May, and Saturday, despite the election results, was no different.

Where large crowds were gathered, protesters paused to call awareness to Karon Hylton’s death on Oct. 23. Hylton, a 20 year-old resident of Northwest D.C., was pursued by the D.C. Metropolitan Police Department while riding a motorcycle, and consequently killed. His death sparked protests and vigils to demand justice and accountability from the officers involved. 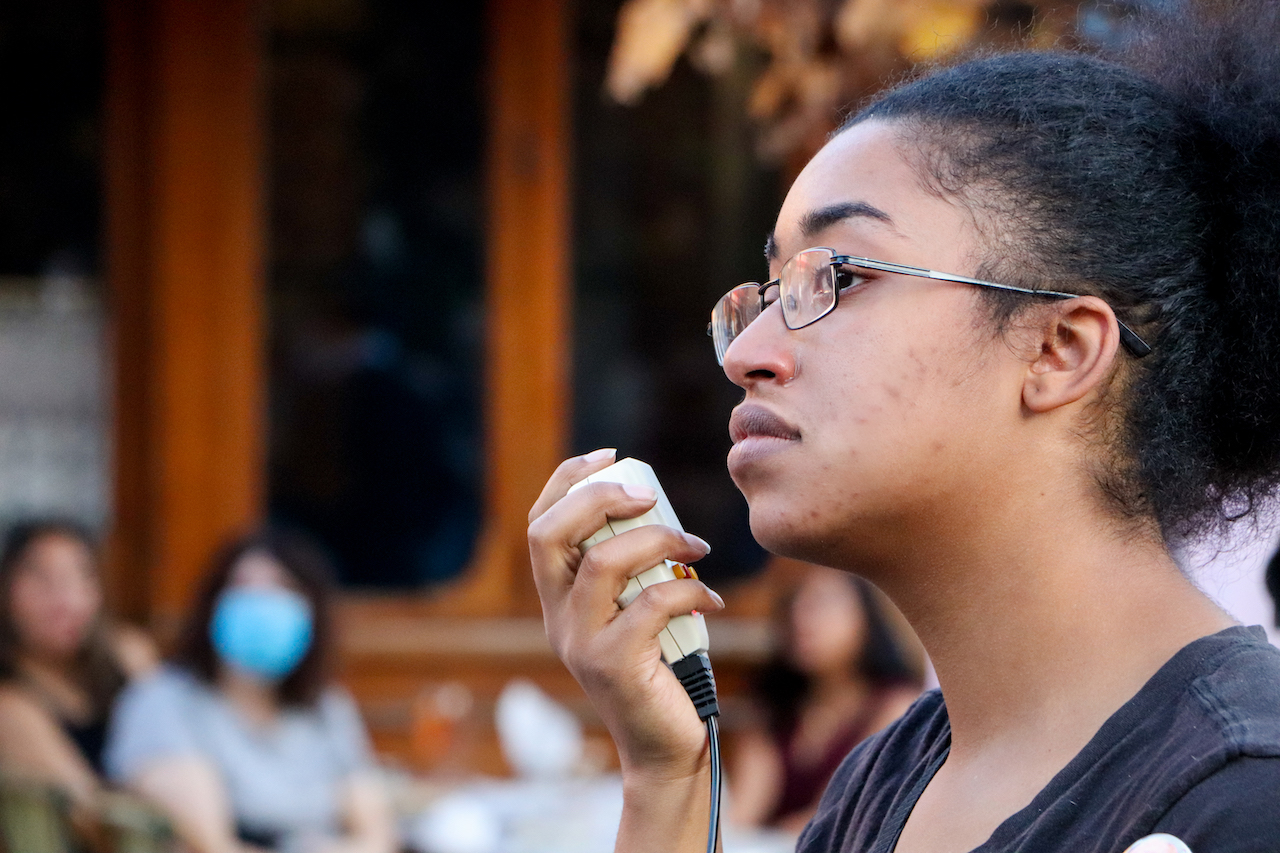 Destiny, an organizer with the Good Trouble Co-op, read an emotional speech about Karon Hylton’s death to diners on 14th Street. (Madison Muller/MNS)

The group ended their march at DuPont Circle, where they met the They/Them Collective to distribute mutual aid and hot dinner to homeless people in the area.

“Thank you all for voting, but we’ve got a lot more work to do,” Destiny, an organizer with the Good Trouble Co-op, said.

After the break, They/Them Collective began their march. The group again walked to Black Lives Matter Plaza, chanting “Same S–– Different President,” among other calls to acknowledge that Black, brown and Indigenous people are endangered, despite who is in office.

A group of protesters continuing to fight for racial justice is now approaching Black Lives Matter Plaza, where Biden supporters have been celebrating all day. #dcprotests pic.twitter.com/nUZ72yCvUO

Donning all black, they entered Black Lives Matter Plaza to address members of the media and those still out celebrating Biden and Harris’s win. The group again read a statement about Hylton’s death, and asked media that was present why their coverage of the racial justice movement has waned.

“Karon Hylton was the father of an infant baby girl,” Simpson read aloud on behalf of the group. “He was 20 years-old, and described as fun, joking and a happy person by friends. Hylton was getting his GED and aspired to be a firefighter.” 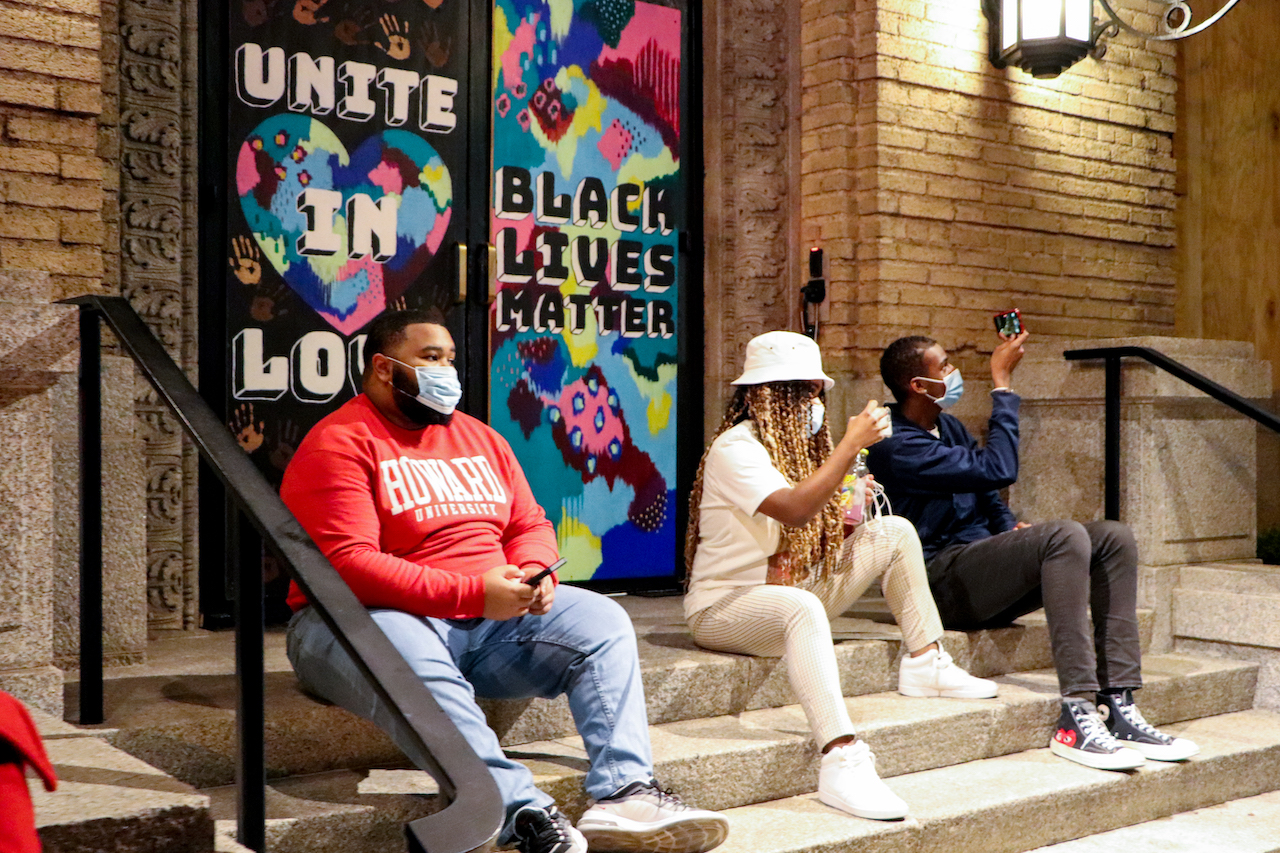 Bystanders watched and took photos as the group walked by. (Madison Muller/MNS)

Ending in Adams Morgan, protesters talked with a diner wearing a Biden mask, who asked why they were still out marching.

“Haven’t you been paying attention? There’s still no justice,” one protester answered.