For some of Florida’s international students, remote learning comes with added burdens 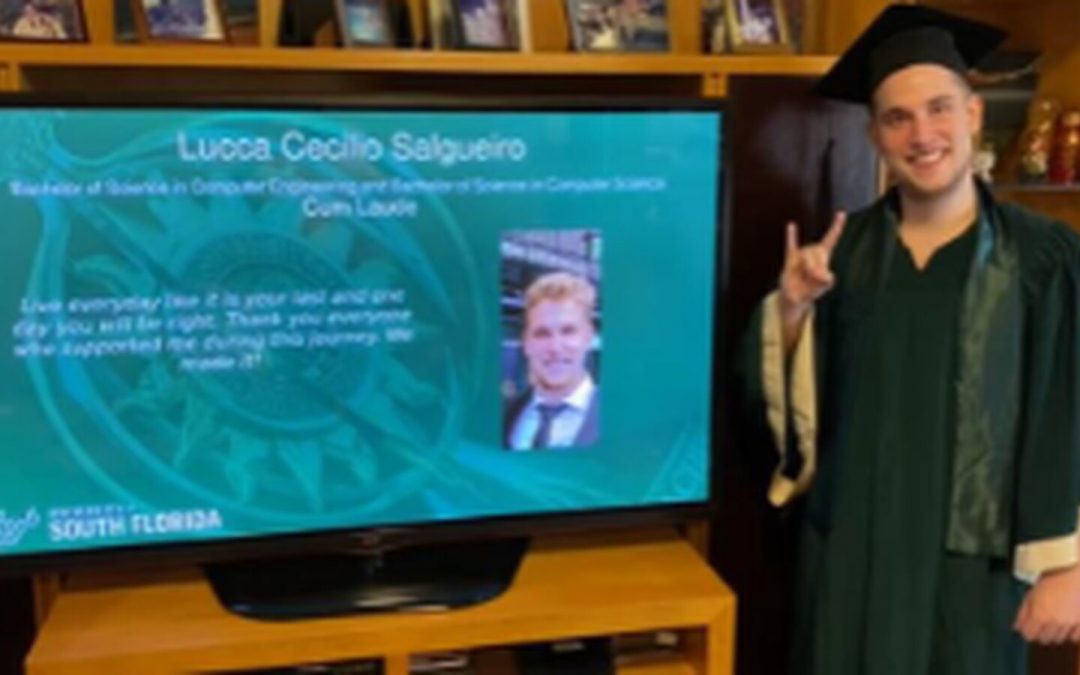 The day before the University of South Florida’s virtual commencement in December, senior Lucca Salgueiro decided to postpone his graduation.

The plan was for the student to attend the online ceremony from his hometown of São Paulo, Brazil, where he had been quarantining with his family since April. But because Salgueiro was not in the U.S. by the time of his graduation, he would not qualify for post-college work authorization.

So he watched the graduation online, but chose not to participate, delaying his matriculation until May.

In addition to seeing both internship and full-time job offers vanish because of that delay, Salgueiro faces extra challenges. To graduate this May, he is paying at least an extra $6,000 in tuition as he is no longer eligible for financial aid.

The 22-year-old student is currently working around the clock to be able return to USF. Since May, the U.S. has imposed a travel ban on Brazil, barring him from returning. Meanwhile, American consulates in his home country remain closed, keeping him from renewing his student visa.

“I would schedule an interview at the consulate and then they would cancel it as it got closer,” Salgueiro said in Portuguese. “I’ve scheduled nine interviews in order to try to return to the United States. As they kept falling apart, I was on the verge of losing my student visa.”

Salgueiro is now back in Florida, after quarantining in Ecuador for two weeks. He renewed his visa at the U.S. consulate in Guayaquil on Feb. 3.

Last fall, 4,347 international students from 141 countries enrolled at USF, a six percent drop from the previous year. Although most undergraduate students like Salgueiro hail from Brazil, graduate programs, which are composed mainly of Indian and Chinese students, registered the largest drop in enrollment, says Kiki Caruson, the interim vice president for USF World.

Jo Kozuma, an international engagement coordinator at the University of Florida, said that although the institution was able to adapt to remote learning, it is important to understand the demands and needs of specific students.

She mentioned the case of two visiting scholars at UF who were caught in a Catch-22 when their home country closed its border for its own citizens and their U.S. visa was about to expire.

“Their home country shut its border, and even as citizens of that country, they could not reenter, and their visa was running out over here,” Kozuma said. “They were really caught between two hard places. They were told to leave the U.S., but yet they couldn’t fly back home.”

At Florida International University, some international students have even been forced to delay their education in the U.S. until they can make their way back into the country. Many graduate students work as teacher assistants, receiving a stipend from the university to support themselves, said FIU Global Mobility Executive Director Alejandra Parra. But as some of these students opted to move back to their home countries, many are not being allowed to work from home, she said.

“There are five countries where for tax reasons and for employment law reasons students cannot work,” said Parra, citing China, Russia and Iran as examples. These students, Parra adds, are being forced to take “a semester off until they can come back.”

Florida’s public university system hosts over 30,000 international students each year. In 2019, foreign students contributed more than $1.5 billion and engaged in 15,000 jobs in Florida, according to the NAFSA: Association of International Educators, a nonprofit.

Despite the challenges the state’s universities face to recruit and retain international students amid the pandemic, Caruson said that the university was lucky that enrollment didn’t drop further.

“Despite the hardships of COVID, which is affecting everyone, but also the travel restrictions and the closure of consulates and embassies, there really is a feeling of hopefulness in terms of being able to get to the United States and start a degree,” Caruso said.

“Now that we can begin to reestablish a sense of normalcy again, I know all of us are longing for that, including the international students,” Puig said. “They want to be among us and they want to be able to participate in the day to day experience of college life.”

At the end of the day, despite all the hardship that came with the pandemic, Salgueiro says that nothing changes the joy of getting a degree abroad.

“I’ve always had the dream of wearing USF’s green gown, getting on top of the bull to take pictures and pop the champagne, like everyone does,” he said. “But everything happens for a reason.”