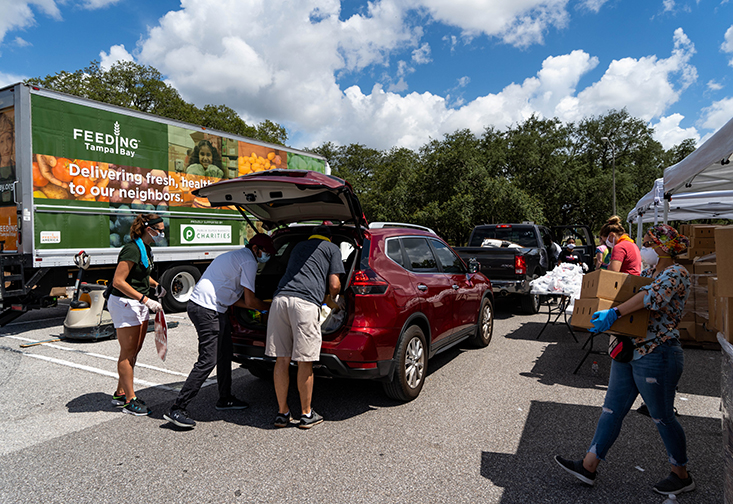 Staff and volunteers load items into cars during a mega-pantry food distribution effort by Feeding Tampa Bay outside the Yuengling Center at the University of South Florida. (Courtesy of USF.EDU)

WASHINGTON – Every eight days, Gloria Romero’s 23-year-old son drives her half an hour away to the University of South Florida, then lines up among 700 cars and waits until a Feeding Tampa Bay volunteer places a box full of potatoes, onions, oranges and carrots in the trunk. If she’s lucky, the groceries last 15 days.

After Romero’s housekeeping job was cut to 10 hours a week and her son lost his sales job, she couldn’t afford the nutritious food she needs to help control her Type 2 diabetes. Romero, 61, who has been living in Wesley Chapel for four years, said she was forced to find another way to help her family of three get by during the pandemic.

Her food supply became more scarce as the months went on. Finally, a friend told her about a food pantry that started during the summer. “This market is a blessing from God,” Romero said, speaking in Spanish.

“What I know is that this country is marvelous and that we help each other,” she said.

By mid-October, nearly 20% of Latino households in Florida reported that they didn’t have enough to eat in the past week, compared with 11.6% of white Florida households, according to a new report released by UnidosUS, a Latino advocacy group.

More than half of Latinos in Florida reported that they or someone in their household experienced a loss of employment income since March, compared with 39.5% of white adults. As a result, more than 60% were concerned about keeping up with basic expenses such as groceries.

Government nutrition programs, such as the Supplemental Nutrition Assistance Program, are critical to reducing food insecurity for Hispanic families in Florida, but many face barriers to participation because of residency status and language. About 4 million Latinos nationwide who are eligible for SNAP do not participate, many of them in Florida.

Before the pandemic, Hispanic children, who comprise one-third of all children in Florida, were more likely to experience food insecurity than other children, with nearly one in five living in a food-insecure household.

The pandemic led to a rise in Latino unemployment, from 4% to 19% nationwide, worsening the existing food disparities. Added to that, an estimated 60% of Latinos in Florida are concerned that their children will have trouble accessing free or reduced-price school meals, according to UnidosUS.

Some may experience health issues because they can’t afford healthy foods, said David Himmelgreen, a University of South Florida professor who has researched childhood hunger. These include iron deficiency that causes bone development problems, immune system disorders that increase susceptibility to viruses such as COVID-19 and increased risk of developing conditions like diabetes, obesity, hypertension and asthma. Worse, Latinos are already more likely than whites to develop chronic health conditions.

“They’re eating a lot of low-cost foods that are not as healthy because their families need to stretch their dollars,” Himmelgreen said.

Further, food insecurity leads to a decline in mental health and school performance, he said.

Food-insecure households are either unable to afford the food or live in areas where that food is unavailable. Food deserts are common in the Tampa Bay area, Himmelgreen said. Feeding Tampa Bay’s weekly drive-through food pantry at USF has seen a significant increase in the demand for healthy food. Himmelgreen facilitated discussions between the USF and Feed Tampa Bay to start the food pantry, where he also volunteered.

“They haven’t been able to receive adequate food access,” said Monica Rodriguez, chair of the Latino Coalition of Tampa Bay. “We gathered together and figured out how to help and assist those families.”

Her group started by identifying the neighborhoods lacking food. Then, they brought together local companies that sponsor food drives and faith groups that are able to host them.

The Hispanic Services Council has seen more and more families visiting food pantries because of the pandemic, executive director Maria Pinzon said, but lack of transportation is another problem.

The council has helped provide information about food assistance to Hispanic families in the area. Pinzon translates and condenses the information, making it more accessible. It also helps families apply for nutrition programs such as SNAP.

Hispanic children represent one in three of the 1.1 million children in Florida households who receive public benefits, but systemic barriers including eligibility restrictions, high poverty rates, limited language access services and inadequate community outreach have led to a decline among Hispanics enrolling in public benefit programs.

Concerns about immigration status also have led Florida Latinos to sidestep food assistance when they need it most. There is uncertainty surrounding the so-called public charge, a rule that took effect last February making immigrants more likely to be denied a green card or visa if they receive public benefits. The rule, currently under review, would affect the half of Hispanic children in Florida who live in households with mixed residency status.

U.S. Rep. Kathy Castor, D-Tampa, supports an end to the public charge rule. “If people are going to be scared to come out of the shadows, their kids are going to suffer,” she said.

Congress has taken steps to address food insecurity in the wake of the pandemic through the creation of programs such as the P-EBT, allowing states to support the nutrition of children who lost access to free or reduced-price school meals when schools closed. Still, advocacy groups say, there’s more to be done.

Castor said she knows how pandemic-era food insecurity can hurt Tampa children and is focused on putting an end to it. “All of the hardships of the pandemic — whether it’s food, rent, health coverage — they are more acute for kids in poverty,” she said.

Castor said an increase in SNAP money is imperative so families don’t have to rely on food banks. She said Biden’s recent executive order increasing SNAP by 15% will help, but she wants the boost extended through September.

She also supports a proposal to increase the annual $2,000 per child income tax credit to $3,600 for kids 6 and under and $3,000 for kids 6 to 17. She calls it the “most significant investment in children in a generation” because it would lift 5 million children out of poverty.

Karli Goldenberg of Medill News Service contributed to this report.