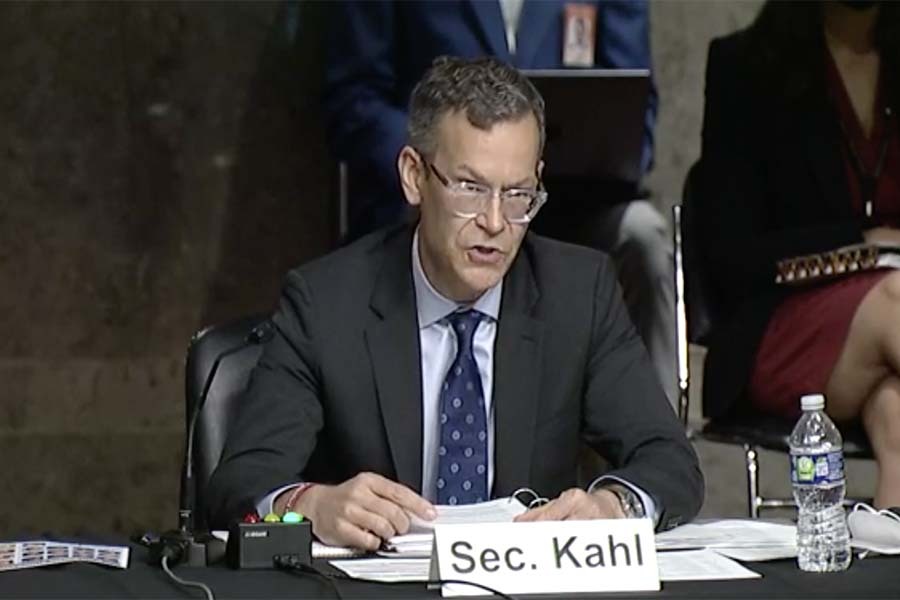 WASHINGTON — Pentagon officials warned lawmakers Tuesday that terrorist groups in Afghanistan could develop the capability to launch international attacks within a six to 12-month timeframe.

“We’re actually fairly certain that they have the intention to do so,” Colin Kahl, the undersecretary for policy for the Department of Defense, told the Senate Armed Services Committee.

Kahl appeared before the committee alongside Lieutenant General James Mingus, the director for operations for the Joint Staff, to testify on the United States’ troop withdrawal from Afghanistan in August and continuing threats within the region.

During the hearing’s open session, Kahl testified that while neither ISIS-K nor al-Qaeda currently has the capability to conduct external operations, they could develop the capability in the near future, according to intelligence assessments.

“ISIS-K can generate that capability in somewhere between six to 12 months,” Kahl said. “For al-Qaeda, it can take a year or two.”

However, Mingus said the intelligence assessments presented do not take into consideration potential intervention from the United States or coalition forces.

Mingus and Kahl were the latest in a series of defense officials to testify before Congress since August, following the troop withdrawal. Kahl previously appeared in a closed-door briefing before the Armed Services Committee in September, where his testimony received heavy criticism from Republican lawmakers.

Throughout the Tuesday hearing, lawmakers questioned the strength of ISIS-K and al-Qaeda as well as their connections to the Taliban.

“For the moment, ISIS-K is mostly focused on creating havoc within Afghanistan,” Kahl said, adding, “But they do have a cadre of a few thousand folks, some of which would love to conduct external attacks.”

Kahl also said that ISIS-K in Afghanistan is not nearly as well-resourced as ISIS groups in Syria and Iraq were during the height of their power in 2014 and 2015 under the Obama administration. He added, however, that the United States needs to remain “vigilant.”

“ISIS-K is obviously linked to the broader ISIS network globally, and so I think we have to be vigilant that a subset of ISIS-K could develop the resources and the capability to strike outward toward the U.S. homeland,” Kahl said. “We have to be poised to disrupt that.”

Kahl also said that government officials have conversed with Tajikistan and Uzbekistan, both of which neighbor Afghanistan and could serve as launching points for any future U.S. military operations in the region.

According to Kahl, the United States is not alone in its unease about ISIS-K and al-Qaeda’s growing capabilities.

“The Taliban is wary about Afghanistan being a springboard for al-Qaeda external attacks — not because the Taliban are good guys — but because they fear international retribution if that were to occur,” Kahl said.

Despite the shared wariness, in October, the Taliban ruled out cooperation with the United States to contain extremist groups in Afghanistan, including ISIS-K.

India and China are similarly concerned about terrorism in Afghanistan, Kahl said. Both countries are located in the region, and China shares a narrow but direct border with Afghanistan.

“China is actually quite worried at the moment,” Kahl said. “They did benefit from our presence in Afghanistan despite the fact they rail against our military interventions across the world…they’re worried about growing instability on their border.”

During a White House press briefing on Tuesday, National Security Advisor Jake Sullivan said the White House considers it possible to have constructive conversations with Moscow and Beijing on Afghanistan.

“I think that we can have constructive dialogue with both of them,” he said, referring to Russia and China. He added that “it would be more difficult to do,” because Russian President Vladimir Putin and Chinese leader Xi Jinping will not attend the G20 summit in Italy in person.
“But there are other formats in which we will be able to engage the Russian and Chinese on this, including through various regional meetings,” Sullivan said.

Despite the growing capabilities of terrorist groups in Afghanistan, Kahl said that intelligence officials believe the risk to the American homeland “is at its lowest point since Sept. 11, 2001” — but Sen. Joni Ernst, R-Iowa, did not see it that way.

“It doesn’t sound like a low risk when you have just told us that the possibility of an attack from ISIS-K on our homeland could come six to 12 months from now,” said Ernst.