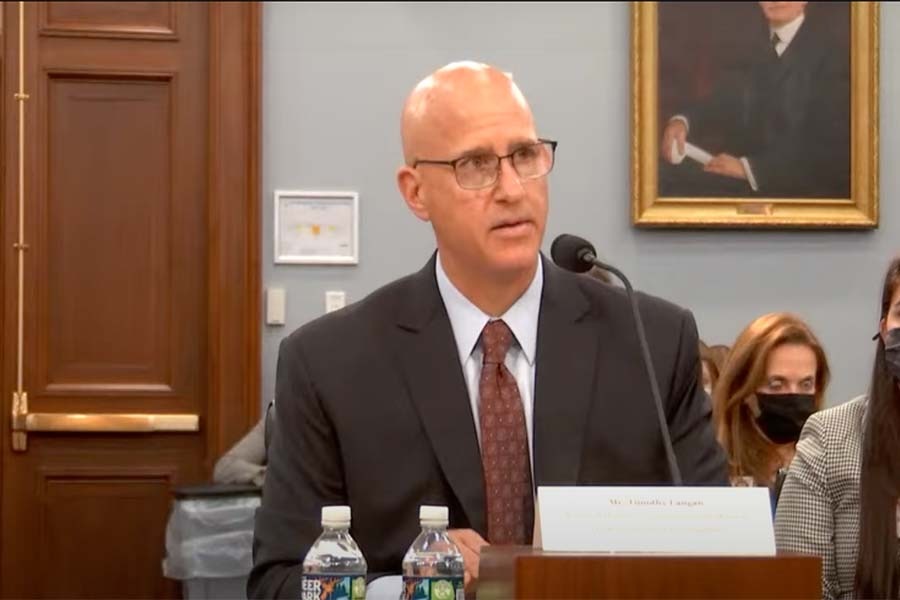 Timothy Langan testified that the United States saw 18 lethal attacks from domestic terrorists motivated by beliefs of racial or ethnic superiority between 2010 and 2020. (House Permanent Select Committee on Intelligence)

WASHINGTON — The primary terrorism threat facing the United States comes from lone individuals and small groups motivated by extremist ideologies, experts told lawmakers at a hearing on Wednesday before the House Intelligence subcommittee.

“When we look at lethal attacks that have been conducted in this country over the last several years, it is a very individualized scrap,” said John Cohen, a coordinator for counterterrorism at the Department of Homeland Security.

This trend of individual and small group attacks did not just appear out of the blue, Cohen said. Rather, he explained, officials began to observe a noticeable rise in 2013 and 2014.

“Actors purposely seek to exploit fractures in our society,” said Cohen. “The anger and discord associated with our political discourse sow discord, inspire violence and destabilize our society.”

Investigations into domestic violent extremists more than doubled last year, according to Timothy Langan, the assistant director of the FBI Counterterrorism Division, who said the bureau is currently conducting approximately 2,700 inquiries into domestic extremist activities.

Langan added that racially or ethnically motivated violent extremists are most likely to conduct mass casualty attacks against civilians.

Racially or ethnically motivated extremists advocating white supremacy committed 18 lethal attacks in the United States between 2010 and 2020, killing 70 people, including those who died in the 2015 Charleston church shooting and in 2019 at a Walmart shooting in El Paso, according to Langan.

That number is likely higher because motivation can remain ambiguous.

“This is a threat that does not fit neatly into traditional terrorism or extremism related definitional categories,” said Cohen, adding: “Those who engage in violence often self connect with a combination of extremist beliefs, or a blend of extremist beliefs and personal grievances.”

While the motivations of such individuals vary, ranging from beliefs of racial superiority to anarchic inclinations, many perpetrators share similar behavior, Cohen explained, adding that many individuals start with a sense of anger.

Over time, they become socially disconnected, spending large amounts of time online. Ultimately, they connect with the cause supporting violence as a way to express their anger and achieve a sense of social connection and self worth, Cohen told lawmakers.

“We at the Department do not police thought,” Cohen said. “It is not our job to engage in activities intended to target political beliefs or social views, their beliefs on race and religion. It is our job to prevent violence.”

Throughout the hearing, lawmakers on both sides of the aisle emphasized the importance of balancing civil liberties while engaging in counterrorism activities.

As law enforcements rises to meet the challenge of domestic terrorism, they need do so in a way that protects the civil rights and liberties, said Chairman Andre Carson.

“Preventing terrorist violence is only one side of the ledger,” he said.