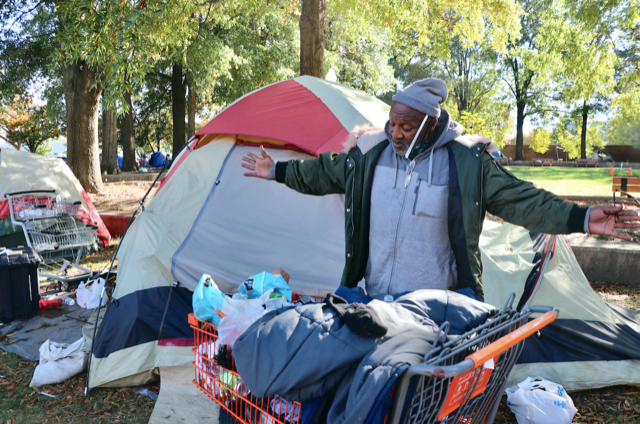 WASHINGTON — Fingers trembling on a 38-degree November morning, Glenda Bullock fumbled with the zipper of her shared tent at the New Jersey Avenue and O Street NW homeless encampment in Truxton Circle.

The spiky-haired 60-year-old, who has experienced decades of homelessness on top of addiction and incarceration, slipped a pair of white tube socks over her hands and clutched the folds of her faux leather jacket.

Perched on a flimsy folding chair outside her tent, she flagged down every passerby for the next half hour, seeking information about the city’s plan to evict her encampment on Nov. 18. Several pedestrians crossed to the other side of the street when they spotted Bullock, who routinely secured her face covering before she approached anyone.

“Once the eviction happens, I’ll be displaced and in the streets,” said Bullock, who previously lived beneath the L Street NE underpass in NoMa before it was cleared in late October. “Nobody from the city’s been down here to tell us anything.”

The closure was pushed back two weeks and is now scheduled for Dec. 2, as noted on a sign city officials posted at the encampment.

Allen Park, where Bullock and an increasing number of people have pitched their tents, is the next of five longstanding homeless encampments scheduled for permanent closure through a pilot program to house D.C. residents experiencing homelessness.

The city first cleared two underpasses in NoMa and plans to evict two additional sites in Foggy Bottom and East End after the Truxton Circle clearing. Outreach coordinators visited the encampments over a 90-day period to compile a “by-name list” of residents whom the city could fast-track for temporary housing accommodations, according to the Office of the Deputy Mayor for Health and Human Services (DMHHS).

Though the District plans to fund one-year apartment leases for 106 residents on the by-name list, according to DMHHS, many unhoused individuals, including Bullock, said they were not approached by city workers and were left off the list.

“The pilot program only selected a few people from down here,” Bullock said. “The same way we didn’t make it on the list down there [on L Street], probably won’t make it down here either.”

Housing advocates, encampment residents and several councilmembers have criticized the pilot program since it was announced in August, arguing that encampment evictions are counterproductive to the rehousing initiative and are especially dangerous now that hypothermia season has begun.

Jesse Rabinowitz, the senior manager of policy and advocacy at Miriam’s Kitchen, is calling on the D.C. Council to enact emergency legislation halting evictions until every person living in the encampment has been housed. He has testified at several recent D.C. Council hearings and is leading a letter writing campaign to urge immediate action from the councilmembers.

“Displacing people from encampments and from parks doesn’t do anything to end homelessness,” Rabinowitz said. “We know that housing is the only thing that ends homelessness in D.C. and are concerned to see the mayor responding to the wishes of housed neighbors who don’t want to see the reality of D.C.’s homelessness crisis.”

Rabinowitz said the pilot program also excludes unhoused residents living outside the city’s major encampments, some of whom have waited years to get off the waitlist for housing assistance.

About 45% of unhoused residents living in Truxton Circle are not on the by-name list and will not receive a housing voucher through the pilot program, according to The Way Home Campaign, a coalition of more than 100 organizations and businesses that Rabinowitz helps organize. Some individuals were not present when outreach coordinators surveyed the encampment, and others moved in after the by-name list had already been finalized, Rabinowitz said.

Other Allen Park residents, like 25-year-old Ezekiel Hernandez, are working through paperwork or obtaining identification documents before they can be placed into housing. Hernandez shared his optimism about the pilot program and said the District has done more to help him get his life on track than any other city.

“The people out here are way, way, way more involved with the community than I’ve ever seen anywhere else,” Hernandez said of the case workers, government employees and volunteers who visited the encampment. “And I’ve been through a lot of states.”

After a caseworker from Pathways to Housing D.C. told Hernandez he and his wife will be placed in a motel once they receive their government IDs this week, he bounced from tent to tent, checking on his neighbors. Hernandez said he was “heartbroken” to hear that some of his friends had not been offered the same accommodations.

The D.C. Council held a seven-hour virtual roundtable on Nov. 9 to hear from community members and gather information before the Truxton Circle clearing. After 5 hours of community testimony, Deputy Mayor for Health and Human Services Wayne Turnage, who developed the pilot program, faced a barrage of questions and criticisms from councilmembers.

“We want to see if we can close encampments humanely by offering people housing,” Turnage said at the roundtable. “If we [close an encampment] by offer of housing, that is humane.”

Questioned by Ward 1 Councilmember Brianne Nadeau about residents who had not been offered a housing accommodation, Turnage said the by-name list was necessary because unhoused people from Maryland and Virginia might otherwise come to town and take advantage of the pilot program. Nadeau pressed Turnage for data showing this was a significant problem, which he said he was unable to present on the spot.

While most people testified in opposition to the encampment clearings, some residents spoke at the roundtable about unsuitable conditions in their neighborhoods.

“Not only are there fires and rats, there’s also death in the park,” said Rachelle Nigro, the advisory neighborhood commissioner who represents Truxton Circle. 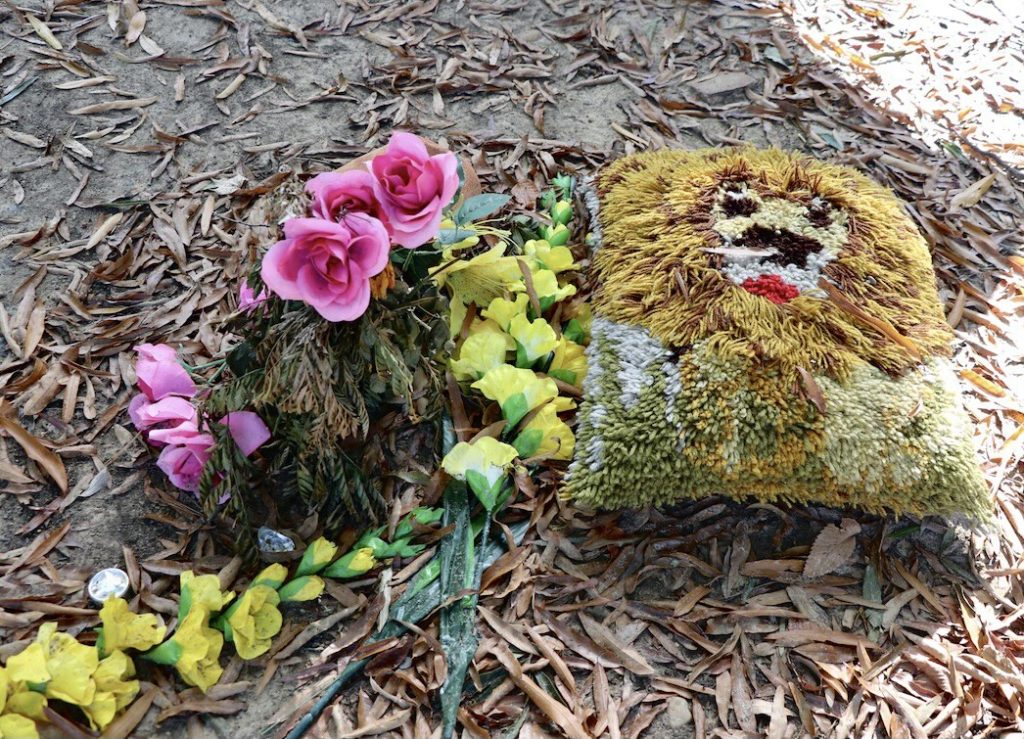 Residents of the Allen Park homeless encampment in Truxton Circle held a candlelit vigil after a resident died in a tent fire on Oct. 4, 2021. (Hannah Schoenbaum/Medill News Service)

Nigro, who called the encampment “an open-air drug market,” shared a list of concerns from her constituents, including public defecation, daily fires, used needles on residents’ lawns, and five recorded deaths since the encampment popped up in December 2019.

As Street Sense Media previously reported, portable toilets around the city, including at Allen Park, were not cleaned or emptied for a short period because the District failed to pay the contractor responsible for them. There are two toilets and a handwashing station — back in service and cleaned five days per week, according to DMHHS — available to the roughly 50 people living in the park.

Bullock described her first week in the Truxton Circle encampment as “traumatic.” When she arrived in Allen Park in early October, she watched a tent catch fire and discovered charred human remains. Residents of the encampment gathered for a candlelit vigil, where Bullock said she bonded with Ezekiel and her other neighbors.

Once she is evicted and estranged from her support network of neighbors and the caseworkers from Pathways to Housing D.C., Bullock worries that she will struggle to stay sober and find employment.

“People look out for each other here,” Bullock said. “That’s what you lose when you lose an encampment — the community, the people who got your back, who you just don’t got anymore once we’re all scattered.”

This story was published in conjunction with Street Sense Media.